All Articles Guitar
Recording Bass: A Lesson For Guitarists Part 2
Rich Tozzoli on Fri, October 14th 0 comments
Language
In the final segment of this two-part mini series Rich Tozzoli explores how guitar players can approach recording bass parts when your bass player is AWOL or you need to get it done yourself.

In the previous article, we talked about some basic bass production techniques aimed at us guitar players. The reality of today's home centric studio work is that we wear a lot of hats, and playing good bass parts on your own tracks (or others) may be a game changer for you. Let's focus on the specific topic of using gain, edge and distortion to get the bass to cut through your mix.

One of the first thing to consider is what kind of distortion signal path you need. By that, I mean what plugins (most of us work inside the computer) will be required to make the bass sound awesome when recording direct (DI).

We previously talked about using things like Sans Amp, Sound Toys Decapitator, Sonnox Oxford Dynamics and the Summit TLA 100 to get some overall amp simulation, drive, edge, and dynamic compression going. You don’t have to have these exact plugins, it’s more the point that it's good to have some kind of software to drive the bass (like an amp/simulator) and something to hold down the peaks (compression).

You can use any kind of distortion plugin to get some edge on the bass (This will, of course, depend on the kind of music you are doing, and how much edge/crunch you need). Even for the cleanest of tracks, I’ve found that adding a touch of distortion or a small amount of edgy gain helps the bass define itself, even in a busy mix. Just use it to taste and don’t be afraid to push it. I’ve found the best way to do it is to push the distortion edge up too much, and then pull it back until it sounds just right. Don’t be afraid to experiment! That’s the great thing about plugins, they can be undone in seconds.

That’s why I like using something like the Sans Amp on bass, because I can turn up Punch, Crunch and Drive just beyond the 12 o’clock position to get a small amount of extra grit. If the track is really ballsy, I crank the drive up past 3 o’clock and push up the Pre-Amp input gain. This drives the bass really hard and creates true distortion.

With something like the Decapitator, I just turn up a small amount of Drive, and use the Wet/Dry knob to control how much effect is actually on the bass track itself. Again, you don’t need these exact plugins to get the job done, just something that can add a touch of grit and edge to your bass.

To really kick things in the up, I’ve successfully used plug ins such as the Universal Audio Engl E765 or Engl E 646 VS to drive bass parts extra hard. The E765 is the cleaner of the two, but can still deliver a lot of attitude. I find it important to pull back the Treble frequency or it can get too bright. There are two channels with slightly different gain structures (both good for bass) and as you might expect, turning the Gain knob up on either will increase the distortion, with channel two being a bit more aggressive. 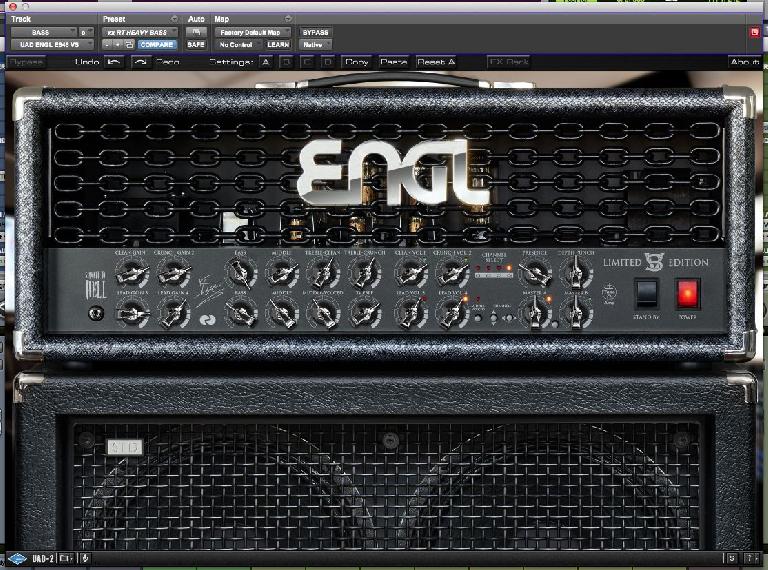 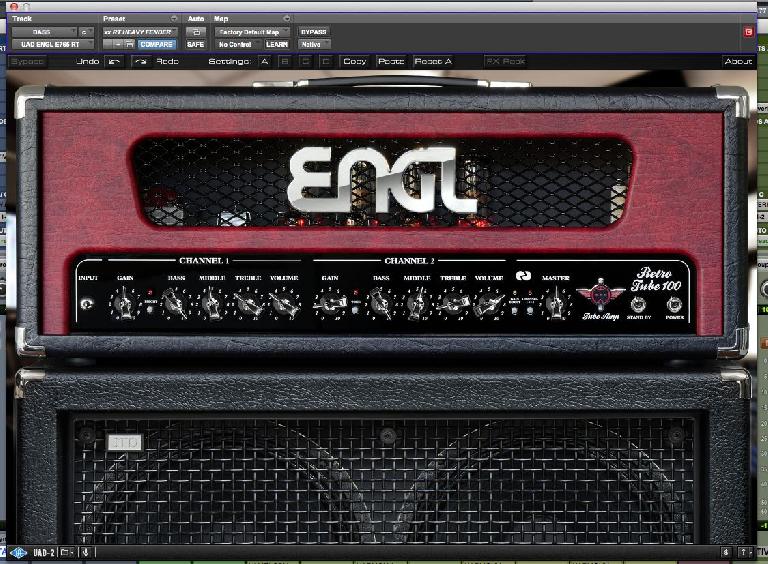 The E646 has even more hi-gain sound, and can deliver a huge over the top distortion if need be. It has four channels with a gain control for each one, and can take your bass into another land of distortion. One of the cool features of both the 765 and 646 is the ability to switch cabinets, which will give you a lot of tonal options for bass parts. It may seem a bit odd to use such ‘heavy’ guitar amps on bass, but they work!

For instances where I don’t need so much gain, I’ve recently been using the Brainworx bx_bassdude, which is a great recreation of a classic early 60s model Fender Bassman amp. The original 50s bassman was designed for bass, but became a favorite of guitarists.

The bassdude (like the original) has two separate input sections with 2 inputs each. The right side is called Normal, where most guitarists tend to plug into. The left is called Bass Instrument, and that’s where I suggest going. Note that when I say ‘plug into’, you simply click there and all the work is done for you. There are two inputs, each one of which has a slightly different impedance value, and slightly different tone. Try both to see what works best for your needs.

In the classic bass tradition, Universal Audio has a few bass amp choices; including the Ampeg SVT-VR and Ampeg SVT 3 plugins. The SVT 3 is the more modern of the two, and I tend to use it only for unique instances where I really need to shape the tone. 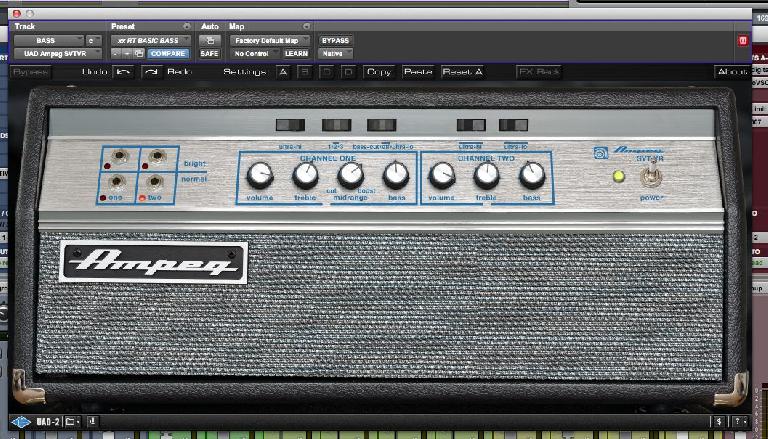 Mostly, I choose the SVT-VR, which is a great version of the lauded 300-watt SVT bass amp heard on countless hit records. It's big mean and nasty, and if you’ve ever worked with the real one, it's LOUD! So having the plugin lets you save your ears. I use a lot of the different cabinet and mic choices (from the Recording chain drop-down menu) and just crank up the volume until it growls.

Usually, I don’t use ambience on bass (only sometimes). But another cool bass plugin I use for cleaner crunch/gain sounds is the Softube Bass Amp Room, which has an amp modeler and 3 unique cabinets, an 8X10 for huge tones, 4X12 for more edge, and a single 12 for rounder tones. 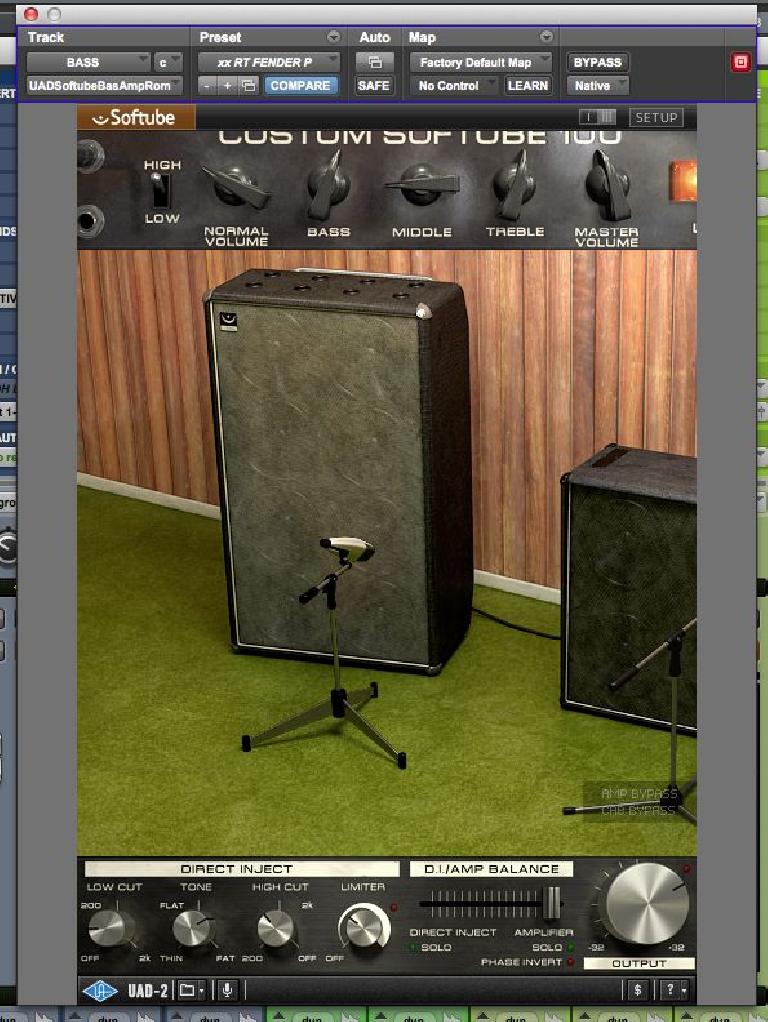 A cool feature is the ability to move the mic around in real time, hearing more or less ambience and tonal changes based upon where you put it against the speaker cab. Also useful is the DI/AMP Balance slider, which lets you mix the sound of your DI with the sound of the amp. It’s a nice way to dial in the perfect blend for your track.

Getting good edgy bass sounds is a journey into experimenting with different plugins, tones and ideas. Just remember to try out knobs and buttons at will, twisting and turning until you find what you need. Then save that as a preset for the next time and keep moving on. After no time at all, your bass will be sounding nasty and thick and cutting through any track.

Learn how to record and produce guitars in the AskAudio Academy here.
Related