There's nothing more exciting than getting a box with the big Akai label on the side. This time, it was the MPK249, a really slick, new controller that bridges classic MPC functionality with a futuristic look and plenty of knobs. Let's see how they did!

The first thing I jumped to, once I simply plugged in the USB cable and launched Ableton Live, and set up Sync Out, was try out the arpeggiator. I'm absolutely thrilled with controllers that include arpeggiators, as they afford you the ability to easily, and in realtime record the arpeggiations as MIDI, and they are a ton of fun for live performance.

"I'm absolutely thrilled with controllers that include arpeggiators. They are a ton of fun for live performance."

Thankfully, the modes that are included for the arpeggiator are standard, but with some cool little additions. Of course, you'll find the regular Up, Down, and Random. But, there are also Double Up and Down modes for the classics, as well as Exclusive and Inclusive Modes that will sound certain notes only once, once a key has been pressed and held. The big winner for me was Pattern mode, where you're able to add in rests. This is so cool for live performance, quick bass part creations, hi-hat sequencing and so much more.

Transport buttons and display on the Akai Pro MPK249.

The only real irritation that I have with the arpeggiator is that you have to hold the Edit button, and then press the arpeggiator button to change modes. Well, that sounds fine. But, the irritating part is that once you start playing keys from the Arpeggiator Edit menu, the menu goes away. This means you have to take both your hands off of the keyboard to edit again, which means you have to stop playing to edit the Arp mode. I'd really love for Akai to alter that. If you could latch the menu, this would mean the player could play with one hand, while altering the arpeggiator mode, pattern and swing, during performance. 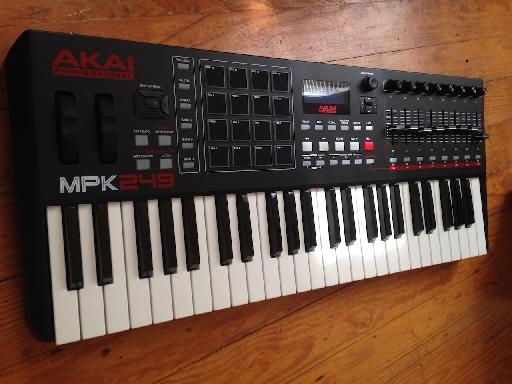 Beyond the arpeggiator, there is the classic MPC Swing, as well as the Full Level (Where the pads all play the same velocity, when enabled) and 16 Level, where the pads will play the last sound played, spread out across all the pads. But, each pad will have a different velocity for the sound, going all the way up to 127. This particular mode has come in so handy for me, in the past, as it allows some amazingly expressive playing.

This is where Akai regularly shines, and for the most part, they are still doing it. Recessed encoder knobs are sturdy, and would really require some real dexterity on your part to remove them. The pitch and mod wheels are recessed, as well and feel really nice, while also being recessed. The semi-weighted keyboard is also nestled snuggly within the black chassis, and has a wonderful action. The only concern I had would be that the black exterior could've been brought up a little closer to the edge of the keys to eliminate any possibility of one of the side keys being snagged. Regardless, it's a wonderful keyboard, and will definitely hold up for years. 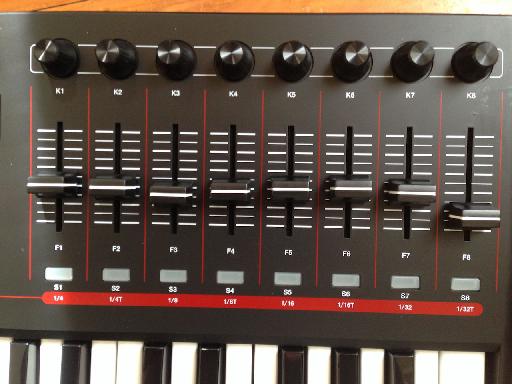 I will say the faders feel a little flimsier than usual. But, the action is still nice. Just a little wobbly if you try to jiggle from left to right.

"The RGB back-lit, MPC-styled, pads are beautiful, responsive and are really beyond reproach."

You can tell a lot of love went into the Pads. The RGB back-lit, MPC-styled, pads are beautiful, responsive and are really beyond reproach. This is Akai's bread and butter, and they do not fail, not even for a minute. The light taps, as well as big taps command response from your DAW, or whatever your MIDI source is. And, as you would expect, you've got multiple banks. They even included DAW control buttons, in a joystick/cursor style configuration, so that you can trigger DAW functions. Though, you do need to configure this through the included software. Speaking of software, what's included? 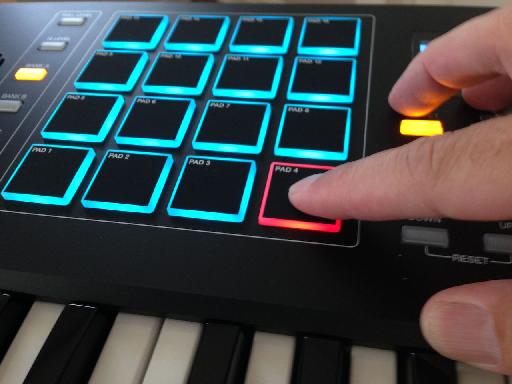 Did we mention the MPC-style pads?

The MPK249 has a small, but powerful assortment of software. As you'd expect, Ableton Live Lite is included. But, you also get Hybrid 3 (a big favorite of mine, please see my review) and SONiVOX's Twist 2.0. Both synths have huge sound and need no introduction in some circles. I'd have to say up front that I'm extremely impressed to see that we're beginning to move away from crappy, almost demo versions of soft synths, as inclusions within controller packages, and getting some synths that have power, and beef.

Included also would be Akai Essentials which doesn't sound that interesting, until you discover that it can run either in standalone, or in a DAW, extends the pad banks up to 8, allows sample triggering, and insert effects. Well done, Akai!

"You get two amazing instruments, a full DAW (with Ableton Live Lite), a sampler, and a really nice keyboard with the best pads in the business. What's not to like?"

And, while I glossed over Ableton Live Lite, if you're a new user, this would be a wonderful package deal for you. You get two amazing instruments, a full DAW (with Ableton Live Lite), a sampler, and a really nice keyboard with the best pads in the business. What's not to like?

So, how did it work? Seriously, it was plug-play and go. Yes, I could've spent some time on the software, but really, this is my way of seeing how easy, initially, the experience will be. One sync out was set up in Ableton, the MPK249 worked flawlessly. In fact, I had one of the best pad-drumming sessions I've had in a while. Additionally, I had a really good time playing simple piano parts on the semi-weighted keys, and found that I had little difficulty getting a good performance out of the controller, all except for the Arpeggiator Edit menu problem that I mentioned earlier in this review.

I also love the built-in transport controls, as well as Tap Tempo and Note Repeat!

Ultimately, this is a great buy and a great controller. It could have more consideration for the live performer. But, for someone new, that just wants to get in and lay down some beats and play, you're going to have a blast, and get a lot for your money. All in all, I have to say, 'Well done, again, Akai!' Dream It. Do It.
Do you want to learn Making Electronic Dance Music?
Yes, I want to learn!
No Thanks, I just want to read the article.
Feedback
How are we doing?
We'd love your thoughts, feedback and questions regarding our new site. All feedback is appreciated!
We do not respond to this form! If you need support, please visit our support page.
Thank you for your input!
Your message has been successfully sent
Course Advisor
Don't Know Where To Start?
Ask A Course Advisor