All Articles Review
Review: Bastl Instruments bitRanger
Hollin Jones on Thu, November 17th 2 comments
Language
A synth with over 100 patch ports is a cool enough concept, but imagine if you could also use it on the beach, or the bus. The future is here, and it's called bitRanger'¦

Some of the most interesting gear is made by the smallest companies. Often obsessive hobbyists themselves (in a good way), the people that come up with unique and handcrafted products have more freedom to experiment than larger companies do. Bastl Instruments is one such outfit and the Czech synth builders have come up with a new, ultra-portable synth that could be the most bonkers thing I have used in a long time.

bitRanger is billed as “a patchable analog logic computer which sculpts sonic worlds ranging from data noise to melodic arpeggios”. This is probably more accurate than simply calling it a synth: partly because it’s not really a conventional synth at all, and also because it’s capable of much more than just generating a few sounds.

Watch our overview of the Bastl Instruments BitRanger here:

Right from the get-go, bitRanger is scoring points for uniqueness. It’s a patchable, CV-controllable generator that is unbelievably lightweight and can run happily off batteries, though mains power is also available if you add a PSU. We’re seeing the emergence now of a few proper synths that can be used pretty much anywhere such as on the train, but they’re still rare enough that it’s noteworthy. It has a solid body and is not especially heavy even with a battery on board, though if you’re going to carry it round a lot I’d recommend a carrying case of some kind, as I would for most equipment.

There’s a built-in speaker that goes up surprisingly loud, and also a headphone mini jack for experiencing stereo and to avoid scaring your pets with high-frequency sounds. (I’m not kidding about that). To get started you simply turn the box on and dial in some volume. What happens next is really up to you. The developers are keen to stress the fact that this is a very experimental instrument, and I can see why. With the bundled patch cables, you make connections via the multiplicity of ins and outs on the front panel and in their words, “see what happens!” 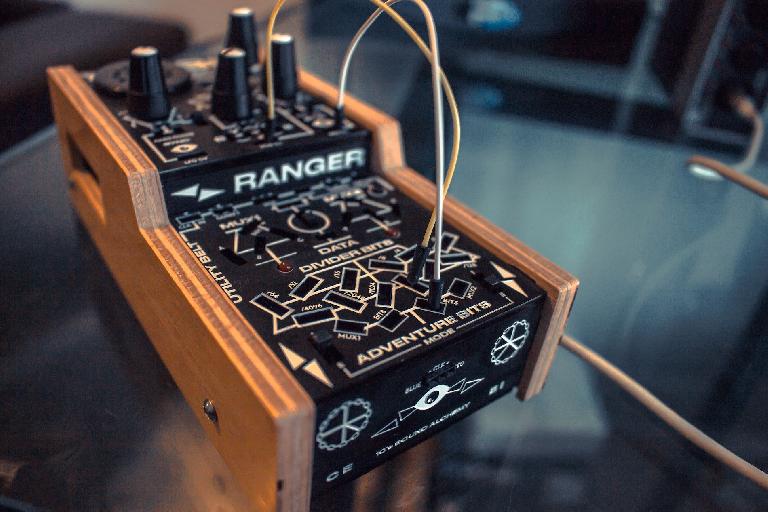 For once this isn’t quite the cop out it can sometimes sound like. There are no presets, nor even any real guidelines save for the fact that outputs are shown with an outline and inputs without. There’s labelling of ports, of course, though beginners will need to read up a little on what exactly some of these things are for. Well, they only will if they are going to take a methodical approach to sound mangling to try to achieve a specific goal. I actually found myself just patching stuff into other stuff then using the LFO, VCO and HFO knobs to see what happened. This is actively encouraged in the manual, and I have to say it’s tremendous fun.

bitRanger is fairly “out there” in terms of the sounds it makes. There are over 100 patch points despite the small size of the unit, and multiple switches to change the mode of operation. You can get some gnarly white noise out of it and also introduce melodic arpeggios into the sound, or as often happens, hit on some combination of the two. Making weird and wonderful sounds is easy and patching around—even patching multiple bits into a single parameter since many have two or three input sockets—yields endlessly interesting results. 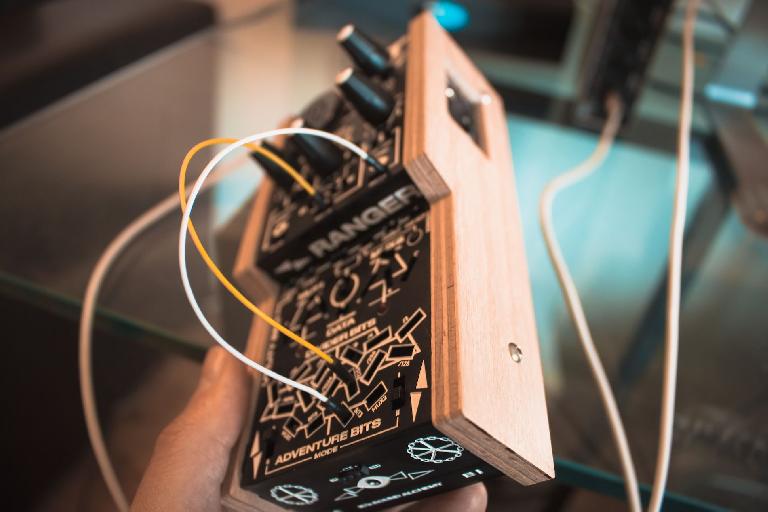 For a more controlled sound, those not already well acquainted with the building blocks of synthesis will want to read through the manual, which does a good job of explaining what everything does and gives you some tips and tricks to try out. The Bit outputs at the base (Divider and Adventure) for example can be used as voltage sources to control the frequency of the three VCOs. Running at different resolutions, these produce wildly different results depending on where you route them to. Divider Bits create patterns and Adventure bits add irregular rhythmic elements.  The VCO oscillator is synced to the HFO oscillator and the oscillators also have Rate switches.

If this was the full story, bitRanger would still be a remarkable piece of kit, albeit more for sonic experimentation than heavyweight studio use. But there is another facet to it and that’s the ability to both accept and output CV signal to enable it to be incorporated into wider setups, connected to drum machines or sequencers, or used as an algorithmic CV/GATE pattern generator.

On either side are the connectors that make this happen: Clock In to sync the LFO, Clock Out with division of 2 or 32, and CV out from the BYTE DAC section. In practical terms what this means is that bitRanger can act as a master or slave when synced with other gear, it can operate as an arpeggiator or sequencer to trigger other kit and generally act as a cool way to trigger your other gear. With CV featuring more and more not just in independently-developed gear but in stuff put out by bigger companies like Arturia and Roland this capability makes bitRanger especially attractive to anyone who owns something that can accept CV in.

bitRanger is a remarkable thing: a synth that has over 100 patch points, in a box so small and light it can power from a battery and travel anywhere with you. It’s also a CV controller for other compatible instruments, of which there are many: the company’s site suggests hooking one up to a Pocket Operator synth, which would be amazing. Although it’s a lot of fun to play with, to get the most out of it you will want to do at least a little reading of the manual to see what the various sections are for. Pure experimentation is a fine thing, but so is knowing what you’re doing. Ultimately, I’d say bitRanger has something for everyone: novel, fun and immediate enough to fascinate pretty much anyone but also a serious sound generation and triggering tool for those that want to take things to the next level.

Pros: Insanely portable. Very cool design and amazing results. Infinite possibilities. Integrates with other CV-compatible gear. Has a fun side as well as a serious side. Over 100 patch points. Built-in speaker and battery power.

Cons: At some point you’ll need to read the manual to go beyond pure experimentation. Small size of patch cables means care should be taken not to bend them.

Dream It. Do It.
Do you want to learn volca keys Explored?
Yes, I want to learn!
No Thanks, I just want to read the article.
Feedback
How are we doing?
We'd love your thoughts, feedback and questions regarding our new site. All feedback is appreciated!
We do not respond to this form! If you need support, please visit our support page.
Thank you for your input!
Your message has been successfully sent
Course Advisor
Don't Know Where To Start?
Ask A Course Advisor