All Articles Review
Review: Bastl Instruments Dude! - Battery Powered 5-Channel Mixer, That's More Than a Mixer
G.W. Childs IV on Mon, July 17th 0 comments
When is a mixer more than a mixer? When it's also capable of generating its own noise. G.W Childs gets up close and personal with the Bastl Instruments Dude!

The dudes from Bastl are back at it again with a new, battery powered device that has more than a couple of tricks up its sleeve. In this review, I’d like to go over what’s cool about the new, mini mixer from Bastl, known as Dude!, and what it can do to your sound.

I always get excited when a little Bastl box comes in the mail. It’s always a presentation, and you can always tell that there’s more than a little bit of excitement on the other end regarding your purchase. Stickers, wrapping paper, hand stamped boxes and love blanket the tiny devices and always leave a little residual spirit humming around, as Bastl’s excitement and enthusiasm are very infectious. The love of the product can also be perceived on the website, and in the videos of the giant collective.

This recent package arrival brings Dude!, a big sounding, five channel mini-mixer that runs on four double A batteries, and accepts 9v power from an adapter (not included) as well. And that is a good description of what Dude! Is. But it doesn’t even come close to filling you in on what Dude! does. Believe me, the Dude abides… 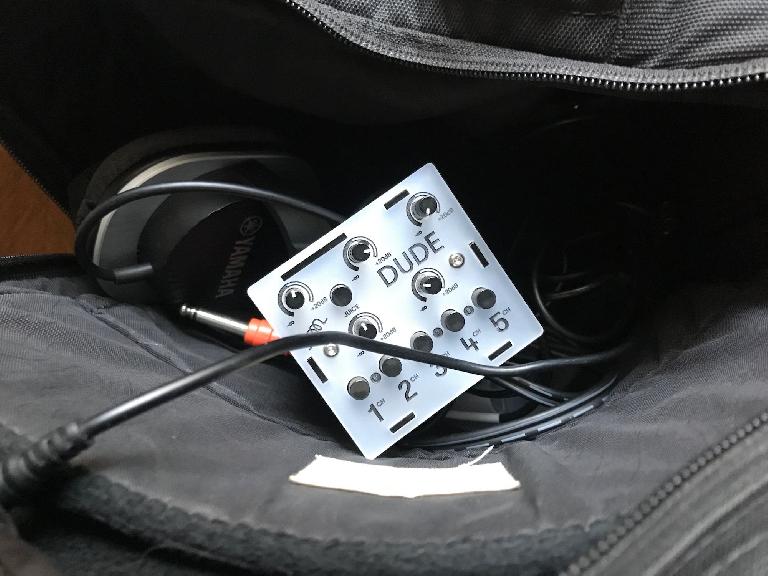 There are 5 micro knobs sprinkled around a Juice button, and 5 little mute buttons, with some big LEDs next to them. When the Mute buttons are pressed, the white LEDs come on and you can hear what’s connected via 1/8” connections. These are all the basics. But as you begin to look closer at the small knobs, you begin to notice something that you don’t see on a lot of mixers, big, or small - a +20dB boost on each knob, occurring at the midway point of each dial’s range of selection. Dude! can get loud, and then Dude! can get louder. 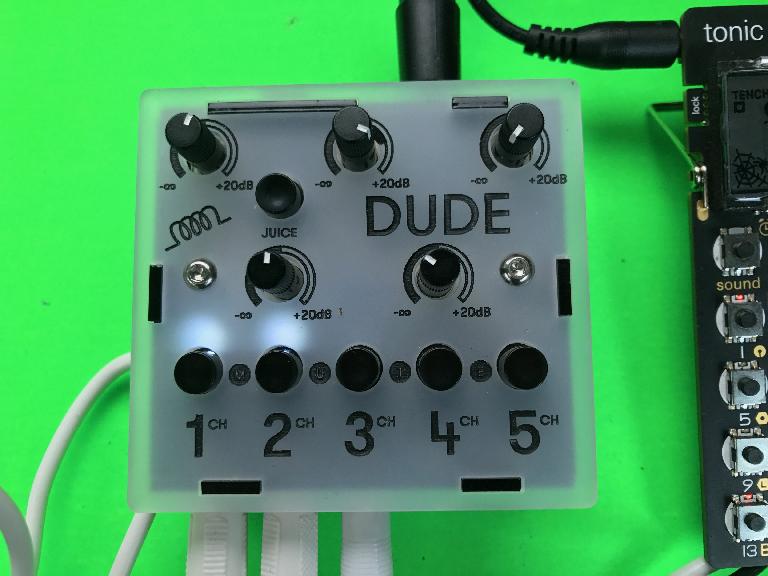 Each input is stereo, but only accepts the left channel. Two buffers - Left and Right - clone the left signal so that you’re seemingly listening in stereo even if it is really monophonic. This is great, as you can split channels using an adapter from the single output, and even feed Dude! back in to itself for some real noise. All channels are fed in to an active summing stage and when driven with the 10-20+dB boost, saturation takes place adding some serious warmth and drive to whatever is being passed through at the time.

That’s part of the charm of Dude! It’s not just a mixer, it’s also part noise generator. If you split the output and run Dude! back in to itself (spitter on main output, with another patch cable going back in to a Dude! channel), tones get longer, louder, and bigger. If you need to boost a signal, it’s also a great little box to have in your backpack. I was doing an Ask.Audio master class the other day, and just needed to boost my volca beats signal - Dude! stepped up and made those drums hum and stand out. 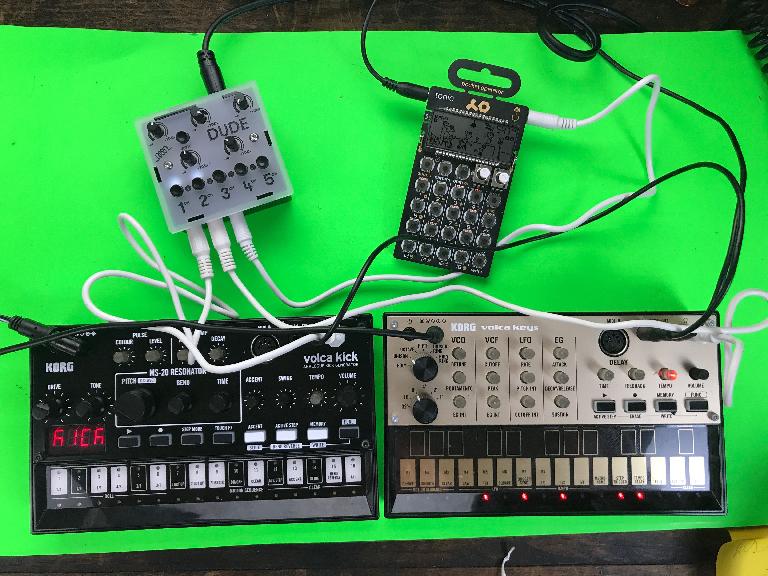 Dude! is amazing, but it’s not perfect. You do need to be careful when moving the unit during a performance when running on battery power, as the batteries are exposed on the bottom, with no enclosure. Small drops, impacting the base of Dude! can cause loud pops, and momentary power loss, until the batteries reseat. And because it’s so small and cables carry their own weight, Dude! can move around. Also battery output as opposed to adapter power can affect how loud Dude! can get. Outside of the small, two little details, Dude! is a powerful, tiny mixer with some great additional perks in the sound manipulation department. It gives attitude when attenuated, and a crisp, clean sound at the normal operating levels. Big thumbs up, Dude!

Pros: Great sound, tiny, battery powered, and adapter powered, smallest summing mixer I’ve ever seen. Provides great saturation and can be used as a sound generator on its own, with a splitter!

Cons: Exposed batteries that can be easily jostled. One output!