All Articles Review
Review: Novation Audiohub 2x4
The Sound Tutor on Mon, February 2nd 0 comments
Language
With a solid track record so far, Novation deliver another unique product to meet the needs of the live electronic performer. The Sound Tutor puts this unit to the test.

Novation are a company who’ve created a respectable number of iconic products over the years, though the Launchpad is probably the most memorable for the younger generation of readers here, if you’re old like myself, you’ll also remember the impact Novation made with Automap for their Remote SL series of controllers which gave an Ableton Push like MIDI controller experience to all major DAW users before Ableton Live was even considered a major DAW.

Further back in time, I remember the aspiration I had for getting their bedroom producer focussed Basstation, Drum Station or even the mighty Supernova synth back in the '90s. But putting nostalgia aside for a minute, the reason that I’m mentioning these products is to create an appropriate introduction to Novation’s new Audiohub 2x4 which like all products mentioned so far, could be the next desirable product for those with live performance in mind.

Giving it Some Stick!

One of the first notable features of the Audiohub 2x4 is its onboard USB hub which means one less device to carry around with you for gigs. The hub is powered if you use the included power supply so your more juice hungry controllers can get what they need to operate properly. As a laptop user both in the studio and on the road, my USB ports are always in short supply. I haven’t yet justified the cost of a Thunderbolt based USB dock for my Macbook Pro, so like many of you, I’m sure you’re limited to only two or three USB ports max, with your audio device always occupying one of them.

I successfully ran this device with Ableton Push, Native Instruments’ Maschine Studio and a Keith McMillen QuNexus wired up with no issues. So this means the other USB port on your computer can now be utilised for a higher performance duty like running an external USB 3 drive.

"You’re in safe hands should the unit fall in a performance as the lead should not disconnect itself."

Asides from three top mounted knobs for outputs 1-2, 3-4 and headphone volume, every other feature is tucked within the profile of the Audiohub’s tough aluminium chassis. In other words, this thing is designed for taking knocks as well as being able to quickly slip into a bag without parts getting bent out of shape etc. The USB port at the rear for attaching your computer is the tightest fit I’ve experienced, so much so that I swung the unit round my head from the USB lead. The unit didn’t go flying out of a window which means you’re in safe hands should the unit fall in a performance as the lead should not disconnect itself. 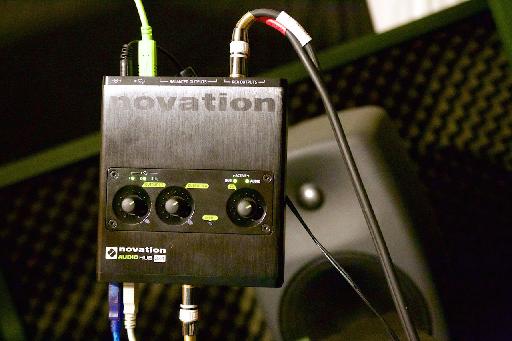 Though your warranty may not recommend my own approach to testing, this USB connection is one of the best I’ve experience and would be a trusted companion in any live show.

The I/O of this device is very DJ/performance orientated, a stereo input via RCA phono connections sits on the front and balanced outputs for 1-2 are at the rear as TRS jacks and as two pairs of RCA phonos at the rear alongside outputs 3-4 which are handy for running through a hardware DJ mixer. Durable hardware switches are available for direct input monitoring, high/low gain and a 1-2 / 3-4 selection for headphone monitoring. On the down side, enabling direct monitoring automatically dips the volume of outputs 1-2 which of course helps inexperienced users to avoid overloading the overall output, but this means you can’t enable direct monitoring mid performance as 1-2’s levels will suddenly dip. This wouldn’t be too much of an issue in a studio scenario, but it’s a minor gripe for myself for live work as I can’t easily mute the input coming into the set-up using this button.

"The input quality is crisp and clear which I tested using my turntables and mixer setup so I could scratch and apply creative processing through my DAW in real time."

The workaround is to instead mute the source and this isn’t always an option, especially if that source material isn’t coming from your own setup. Another minor gripe is that the unit is only functional when USB is connected so this direct monitoring doesn’t work in a standalone mode even though the unit can receive its power from the mains. Not an issue for all potential users, but I’d personally prefer to have a sound source wired through the setup as a backup in case my computer crashes mid show. But I’m happy to report that the input quality is crisp and clear which I tested using my turntables and mixer setup so I could scratch and apply creative processing through my DAW in real time.

Throughout my tests with the Audiohub from the outset I experienced rock solid performance with the lowest of buffer settings. The unit is class compliant for OS X and for once, there’s no software-based routing system included. Instead, you control headphone monitoring, output levels, direct monitoring all directly from the hardware which makes it feel like a controller in its own right. If you plan to perform in loud situations and want to battle loud monitoring with loud headphones, the output stage on this unit is very hot which will please some of you, though I always advise on moulded headphone monitoring rather than deafening yourself when possible.

"This is the most suitable audio device I’ve seen for live performance in this price bracket."

In terms of performance this is a fantastic device and the hardware’s design reflects on the obvious love and attention Novation have given this device. But… I wish 5-pin MIDI was included as collaborative electronic music performances is becoming more and more commonplace and MIDI Timecode is one of the preferred ways to sync more than one computer together in time. You can of course buy USB to MIDI leads and hook up multiple computers that way, but given the ‘live’ nature of this product, I’d like to have seen this included for the price. But aside from this and my previously mentioned preference for a standalone mode for back-up, this is the most suitable audio device I’ve seen for live performance in this price bracket and it survives a good dose of gigging torture.