I should be clear that the main reason I wanted to review the PreSonus AudioBox 1818 VSL is because it is on the list of audio interfaces that are supported by both iOS and the Auria multichannel recording DAW app. Having checked out the very wonderful RME Fireface UCX and discovered its eight channel limitation when working with Auria (despite having eighteen inputs and outputs), I was keen to try an interface that might offer more than double the I/O at less than half the price.

Let us not forget however that the AudioBox is first and foremost designed to interface with your Mac via USB 2.0. That fact alone marks out the device as different from a lot of other audio interfaces which for many years have relied on the FireWire protocol for connectivity.

Out of the box, the 1818 is an efficient looking beast with dark blue brushed aluminium finish and 19 inch rack mount metal casing, which is surprisingly shallow given its capabilities. The build quality seems solid enough, and the metal-knobbed rotary controls have a reassuringly firm action.

All eight XLR inputs, which double as TRS inputs - two at instrument level (hi-Z), six at line level - are arranged along the front of the device for easy access. There are two phantom power switches each of which provides power to a bank of four mic sockets, maybe an indication that some corners have been cut to keep a lid on costs, but there are interfaces at this price point with only one switch. The eight input gain controls are accompanied by LED clip indicators, which helpfully stay lit for a short while after clipping. Finally, next to the Main and Headphones output controls, are a rudimentary pair of output level meters.

On the back of the unit are the power inlet, USB 2.0 socket, word-clock sync out socket, ADAT input and output via optical Toslink connectors, S/PDIF input and output via coaxial sockets, and MIDI in and out. Main outputs and a further eight line outputs are provided by a compact cluster of balanced TRS sockets. No surprises there then, and at 44.1or 48 kHz sample rate you have access to eight analog inputs and outputs, eight ADAT inputs and outputs and two S/PDIF inputs and outputs, giving a total number of channels which gives us the name of the interface! If you wish to record at 88.2 or 96 kHz sample rates however (the 1818's upper limit), you only get four channels of ADAT, as is typical with interfaces of this type. 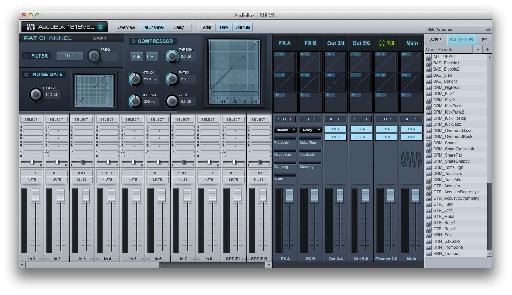 When using the AudioBox with a Mac you can also use the additional (free) software supplied by PreSonus. Virtual Studio Live is a routing and mixing utility, and Studio One Artist is a 'Lite' version of PreSonus' well-received Studio One DAW software. The VSL software is particularly useful as it allows the user to set up very low latency monitoring, has recordable dynamics and EQ processing and monitor-only reverb and delay effects, all powered by DSP chips on board the AudioBox. In use, although it ultimately lacks the routing flexibility afforded by RME's Total Mix software, VSL is still a useful and reasonably powerful utility. I do have to level criticism at the metering in VSL however, which really ought to add something to the action of the hardware clipping indicators, but with only one color and no scale labelling serve only as glorified activity indicators. It should also be pointed out that, cool as it is to be able to record compression and EQ, since the VSL applies these only after the signal has passed through the ADC section of the interface, it is something akin to closing the stable door after the horse has bolted, in terms of guarding against clipping in the ADC circuitry!

So, the AudioBox 1818 VSL is a well specified and great sounding interface with the Mac, but how does it work with the iPad? Auria is the only multitrack DAW app for iPad that can record more than eight tracks simultaneously. Harmonic Dog's Multitrack DAW records up to eight tracks, and GarageBand can assign only two separate inputs, and record just one of them at a time - despite teasing us with an input selector that shows all eighteen inputs provided by the 1818. 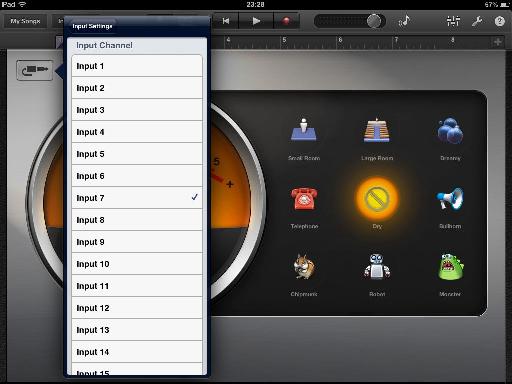 Lots of inputs in GarageBand - but you can only record using one at a time...

RME's Fireface UCX is also an 18 x 18 interface for the Mac, sonically outperforming the PreSonus, but then so it should at roughly twice the price! However it only allows eight ins and outs (analog) when operating with Auria. So here's the difference then '" the PreSonus AudioBox gives a full complement of eighteen inputs when recording with Auria on the iPad. Of course you will need a set of ADC/DAC converters to get analog signal in and out of the ADAT and S/PDIF connectors, but nevertheless this is a potentially awesome combination! 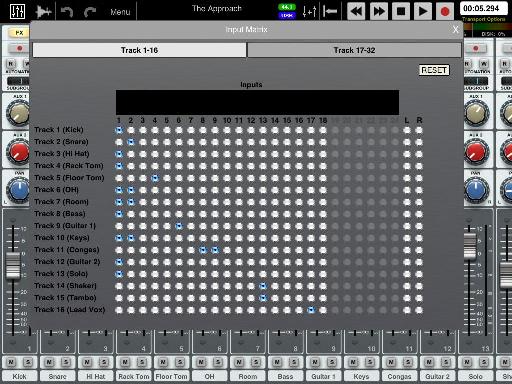 The latest version of Auria now have an output matrix, so all eighteen outputs of the 1818 can be accessed. This is not the case with other audio apps such as GarageBand or the Music app, whose stereo output does not get mirrored across all outputs, and can therefore only be monitored via outputs 1 and 2, and not the headphone jack. Note that at the time of writing it is a requirement that the 1818 is plugged into a powered USB hub, which is then plugged into the iPad via the Camera Connection Kit.

You should also be aware that the features offered by the VSL software are of course not available when working with an iPad. On the plus side, you can also use your iPad to run the free PreSonus SL Remote app, with which you can remote control VSL software running on your Mac, over Wi-Fi.

The iPad is unlikely to be used in a situation where top end ADC/DAC and very high sample rates are required, or the benefits of which can be heard, so, as a well specified, well-made, sensibly priced interface, the PreSonus AudioBox 1818 VSL is a perfect match. The fact that it works flawlessly with both your Mac and iPad as well makes this a great choice of interface for home studio and live sound recording.