All Articles
Review: Qu-Bit Electronix Synapse
Scott Riesterer on Sun, December 9th 0 comments
Synapse is a crossfading switch with a signal path that can be rearranged on the fly, capable of turning static waveforms into evolving soundscapes. Scott Riesterer took it for a spin.

A synapse is a structure in the nervous system that allows neurons to communicate with each other via electrical signals. Similarly, the Synapse from Qu-Bit Electronix facilitates the passing of electrical signals from one place to another. The flexibility that this module offers in this process make it a capable nervous center for your Eurorack system in a variety of fun and exciting applications.

Synapse offers eight inputs with four main outputs, along with an additional three outputs that sum the left four inputs, right four inputs, and all inputs respectively. This means that you can easily set up a stereo mix summing four stereo signals, or sum eight channels into one mono output. The inputs are set up in groups of two, with each pair featuring a crossfader knob and CV input. 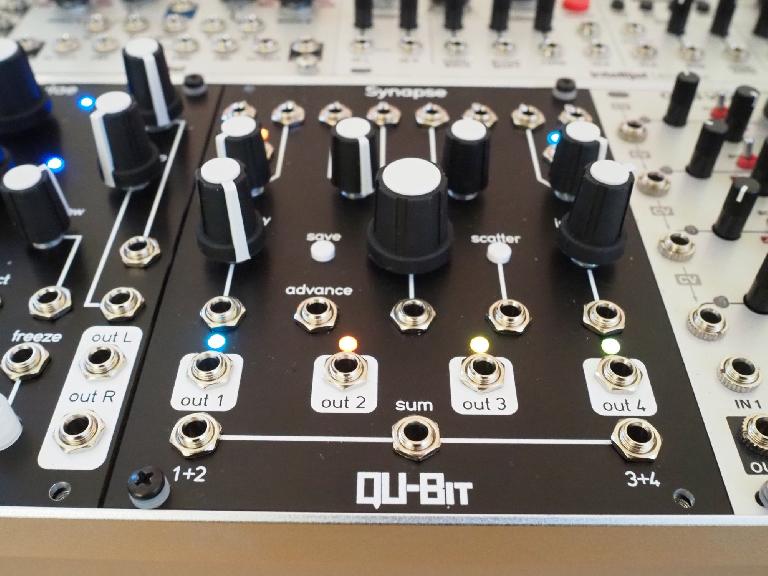 This allows you to either manually dial in your desired mix, or dynamically sweep between two input signals. Synapse also provides an internal LFO that can be used to pan between inputs, but I’ll cover that in greater detail later. Furthermore, the positions of the crossfaders can be saved to eight memory slots. Another factor that makes Synapse much more interesting than a standard mixer is the fact that the four main outputs can be dynamically reassigned.

Each input pair and the four main outputs have LEDs, which indicate important functionalities of the module. Most importantly, they display which input pair correlates to which output using matching colours. Panning with the crossfader will transition from one colour to another, and this is mirrored by the corresponding output LED. These assignments can be rearranged by scrolling with the large Terminal knob to shift them one step at a time in either direction, or they can be randomly scrambled by pressing the Scatter knob. Scatter can also be activated using a CV input, and another CV input called Advance shifts the channels one output to the right whenever it receives a gate. Whatever their arrangement may be, the assignments can be easily snapped back to default by pressing the Terminal encoder. 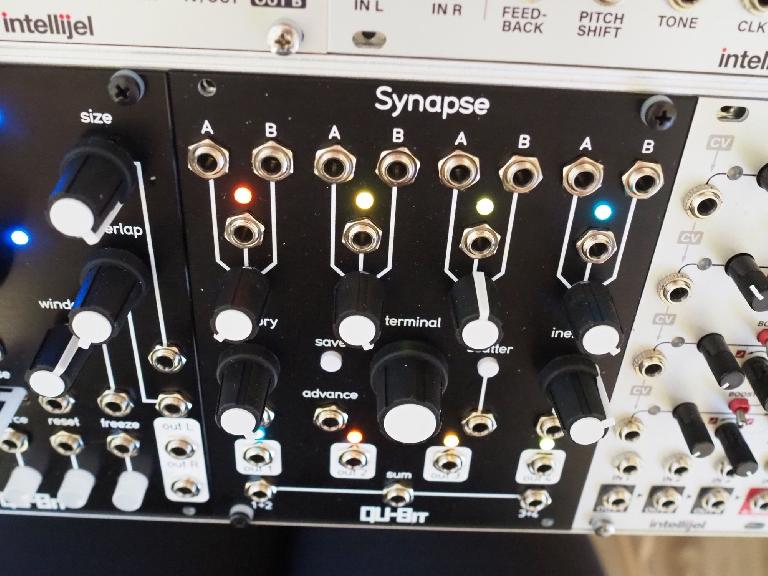 While reconfiguring which inputs feed which outputs, the Inertia knob can be used to add a slewed transition time when the assignments are changed. The LEDs also flash to indicate if a crossfader position memory slot has been selected. The Memory knob is free from saved slots when fully counterclockwise, then steps through the slots which are positioned from the top left inputs to the bottom right outputs. As you step from slot to slot you will see the LED flash to indicate a memory slot has been activated. Selection of a memory slot to determine the crossfader position deactivates the CV inputs, but not the knobs.

Not Your Average Mixer

By this point you’re probably starting to see how flexible and powerful this arrangement can be. Input levels and blends can be saved in preparation for a live set; A signal can be bounced between different effects; or four voices can be rotated through drastically different filters, and so on. Furthermore, it’s possible to activate a five volt signal on the B side of each input pair. This means that the crossfader position can now be used to dial in a voltage value at the output, opening up the possibility of sequencing with Synapse.

More straight-ahead sequencing can be done by triggering the Advance input, or you can manually rotate the Terminal control, or you can randomize steps using Scatter, or you can make use of the memory locations, or any combination of all of the above. The four outputs allow you to control four targets at once similar to a Shift Register. I found this was a lot of fun for rhythmic drones by controlling multiple parameters on Morgasmaton.

Now we get into the more obscure features. First and most importantly, a triangle LFO can be used to control the crossfader position. The amount of LFO modulation is set by holding the Scatter button and moving the crossfader knob, with zero modulation while counterclockwise. Holding Scatter and adjusting the Inertia knob determines the rate of the LFO. Holding Scatter and moving the Memory knob scrolls through four possible LFO relationships between the four input pairs.

The panning of all channels can be synchronous, they can be offset in phase using two different methods, or they can be set to cascade. Holding Scatter and pressing Save will randomize the LFO settings, while holding Scatter and pressing the Terminal encoder will reset all LFO settings. It would have been nice to have the option to synchronize or reset the LFO using a clock signal at the Advance input, but an external synchronized LFO could always be used at the crossfader CV inputs. 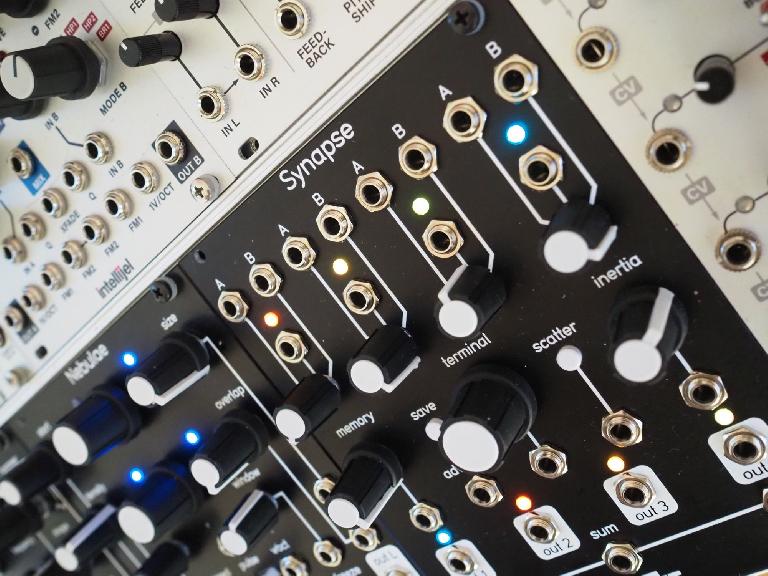 Because the LFO settings all utilized the Scatter button, I found them easiest to remember. Pressing Terminal generally resets things, and Scatter most of the time randomizes things, and that consistency also helped me remember their functions. For example, holding Save and pressing Scatter randomizes the crossfader positions in the eight memory slots, while pressing Save and Terminal together clears all memory locations. Most of the other features accessed by button combinations I found more opaque and had to refer to the manual.

Luckily they’re probably not things you will have to do often. For instance, the five volt normaling on the B-side channels that I mentioned earlier is activated by pressing the Terminal encoder and turning the memory knob. The LED on channel one will turn blue to show when it has been turned on. Because these features are not indicated on the panel, you will have to rely on your memory or the manual to access and configure them. Once you dial in your desired settings, you’re probably safe to forget them until you find you need to change something before setting up a new patch. Of course, I can imagine that it would have been impossible to clearly identify these features without making the panel needlessly complicated. Instead the panel is fairly spartan, clearly laid out, and easy to follow, which is exactly what you want in a mixer. 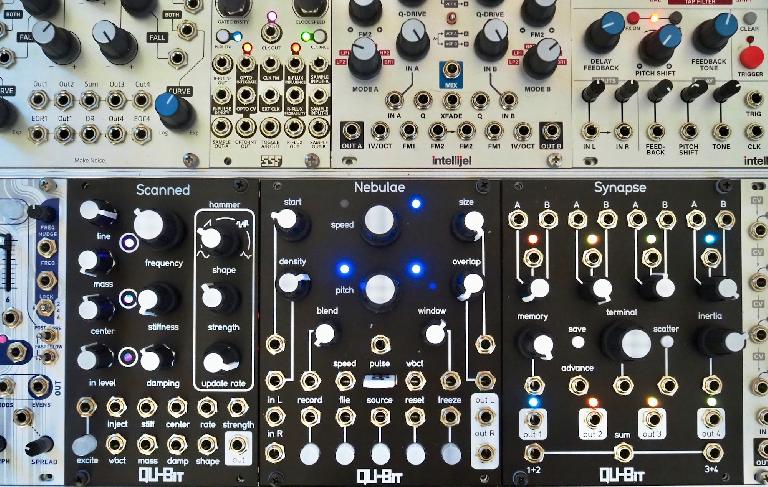 Overall, I really enjoyed getting to know Synapse. The flexible architecture opens up some fun and powerful options for routing audio or CV through your system. It’s a uniquely designed mixer and at home within the Eurorack realm that rewards live manipulation, but also has intelligent CV connectivity to allow it to breathe and pulse with your patches. Qu-Bit managed to pack a ton of functionality into 20HP, and while the more buried features may lead to some confusion and potential frustration, they aren’t necessary for the lion’s share of the tasks performed by Synapse. If you’re looking for a nerve center to tie your system together, this module might be the smart choice for you.

Cons: Configuration of hidden features can be confusing; Internal crossfader LFO cannot be synchronized or reset.

Learn much more about Eurorack and hardware synthesis: https://ask.audio/academy?nleloc=category/audio/topic/eurorackmodular 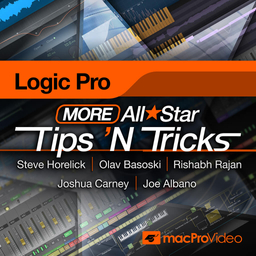 Dream It. Do It.
Do you want to learn More All Star Tips and Tricks?
Yes, I want to learn!
No Thanks, I just want to read the article.
Feedback
How are we doing?
We'd love your thoughts, feedback and questions regarding our new site. All feedback is appreciated!
We do not respond to this form! If you need support, please visit our support page.
Thank you for your input!
Your message has been successfully sent
Course Advisor
Don't Know Where To Start?
Ask A Course Advisor