Radial has been a cornerstone in the direct box world for some time now. Their reputation for making rock solid gear that is noise-free (and could, quite frankly, withstand a tank driving over it) is widely known throughout the keyboard and pro audio world. A few years back they introduced the USB Pro, their first direct-box / audio interface hybrid. Building on the success of that, they recently dropped the Key-Largo - a ‘do it all in one box’ mixer, USB audio interface and pedal trigger that aims to become the ‘hub’ of your keyboard world. As expected, this box is built to withstand a nuclear blast (all right, a *slight* exaggeration, but it’s really solid). That brings a bit of weight to your setup, but if you’re using this device, your setup is likely already pretty massive and it’s not an issue. There are three stereo analog 1/4” inputs on the back for keyboards, and each one feeds to a channel strip with volume control and EFX send. There is a USB I/O which also has its own dedicated volume/EFX slot for combining a computer/MainStage/Ableton Live type setup with your hardware synths.

Can You Summarize This Please?

In a nutshell, you can plug in three separate physical hardware keyboards/synths/workstations, a computer setup, have control of all the volume, and send ‘front of house’ or your mixer/recording setup a single stereo feed of everything. If you’ve got your own reverb or want to have control over which keyboard gets a specific amount of said 'verb, you can do so. If you want to completely disengage the effect loop with the press of a button, no problem. Heck, with a 1/4” cable connected to the side you can even utilize the sustain ‘button’ on the Key Largo as a sustain pedal. Oh, and did I mention standard MIDI jacks on the side that interface with the USB bus? This thing really does everything. 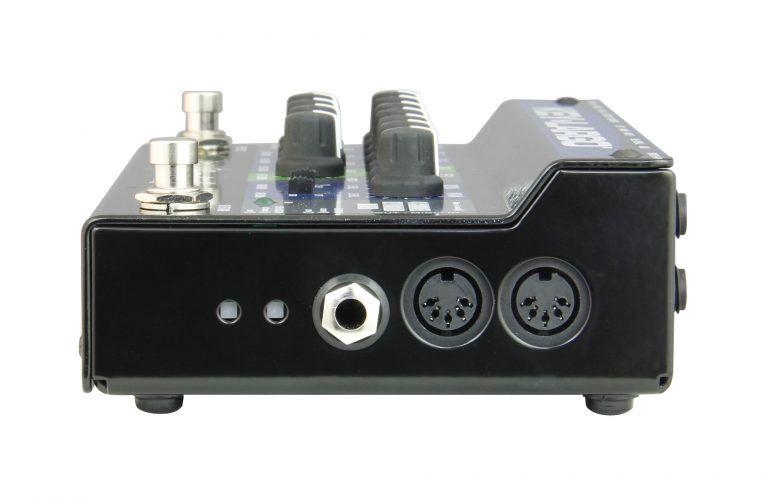 But Does It Blend?

In a nutshell, yes. If you’ve got a multi-keyboard setup that you want to wrap your hands around and control, the Key-Largo is absolutely the way to go. If you’ve been using a small sub mixer to do this before your sound gets to the main board or your audio interface, the Key-Largo will accomplish the same but in a smaller, more effective and likely better-sounding package. My only tiny request would have been to find a way to make the interface completely bus powered when available, but I did notice that even without the power brick, my computer detected it as a USB out audio interface. I couldn’t utilize the mixing aspect of things or power the pedal portion, but maybe we’re not too far off from seeing that added in future models.

Pros: Built like a tank, incredibly quiet sound, cleans up your audio chain, provides a TON of functionality in a very small package, a multi-keyboardist’s dream, allows for combination of software and hardware synths quite easily.

Cons: Not solely bus powered when using a computer