All Articles Review
Review: Roland AIRA TB-3
Hollin Jones on Thu, March 6th 0 comments
Language
Roland has done quite a job of teasing its new AIRA series of instruments, but it's finally here and we got our hands on some of the first hardware units in the country, starting with the TB-3.

Anyone with even a passing interest in electronic music will have heard the sound of the legendary Roland TB-303, if not actually known its name. The diminutive bass synthesizer was the sound of acid house as well as many other genres, and it's been endlessly emulated or approximated in software and hardware forms by others, with varying levels of success. Now though, Roland itself has come up with an official successor in the form of the (similarly monophonic) AIRA TB-3, a very different-looking beast, and one that's ready for the modern age. 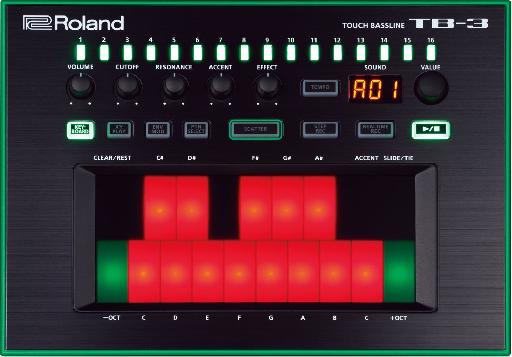 The first thing to note is that the TB-3 is digital, not analogue. While this will irk a few purists, they are still free to search on eBay for costly originals if the analogue thing is that important to them. Roland has obviously made a decision about this, and that's fair enough. What you do get is Analogue Circuit Behavior (ACB) technology, a new method of sound generation that Roland says 'fully reproduces both the sawtooth and square wave oscillators as well as the 18 dB/octave ladder low pass filter used in the original TB-303, capturing that unmistakable cutoff and resonance character'. 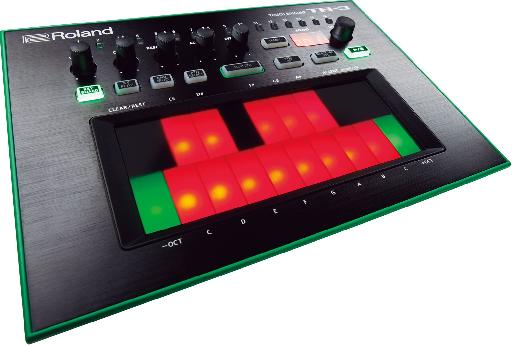 As you might expect, it really does sound like a 303. But there's much more to it than that. The unit itself is small and lightweight but solid and powers either from the mains or over USB, where it can also send and receive audio and MIDI to and from your computer. As well as headphones out you get stereo audio jacks, MIDI I/O and a USB port, as mentioned.

"As you might expect, it really does sound like a 303. But there's much more to it than that."

The front panel is a whole new experience, with a pressure-sensitive touch screen for input as well as 16 step LEDs, sound shaping controls and some other nifty buttons. There are two sequencing modes: Step and Realtime, and in Keyboard mode, the screen becomes a playable keyboard with red squares being notes and green ones letting you move up and down the octaves. In Step mode you also get accent and slide/tie buttons, and a clear/rest button in either mode.

There are 134 sounds built-in and 64 patterns, with bank A being the original 303 sounds and B, C and D new bass, lead and effect patches respectively. Perhaps inevitably it's the classic sounds that are the most instantly gratifying, fat, squelchy basses gaining that unmistakable nasal crunching sound as you move the cutoff and resonance controls up and down. The other sounds are really good too, with variable effects including delay, reverb and more.

"A new feature is the Scatter effect. This turns the touch pad into a sort of glitch / stutter effect that repeats sections of the signal rhythmically."

A new feature and one that's pretty cool is the Scatter effect. When activated, this turns the touch pad into a sort of glitch / stutter effect that repeats sections of the signal rhythmically, making performing with the TB-3 really straightforward and fun. Of course as well as playing the instrument manually you can hook it up to your DAW for MIDI control and make it part of your studio rig.

The TB-3 is a great little bass synth and dare I say it, rather easier to use than the TB-303 ever was. Then there's the price. At just Â£245 it's an affordable way to bring the classic 303 sound into your life. There's tons of technical detail on Roland's site, which is well worth checking out.