All Articles Review
Review: Roland AIRA TR-8
Hollin Jones on Wed, February 26th 0 comments
Language
Roland's drum machines more or less defined the '80s, but can the TR-8 do the same for a new century?

The Roland TR-808 and TR-909 Rhythm Composers (or drum machines, if you prefer) are among the most iconic pieces of music tech hardware ever produced. As well as soundtracking a lot of early hip hop and '80s soul, they remained popular well into the 21st century, thanks to the ever-fragmenting genres of electronic music that still valued their unique drum sounds. As with all classic hardware, originals became scarce and expensive, and samples and software took their place for most musicians. 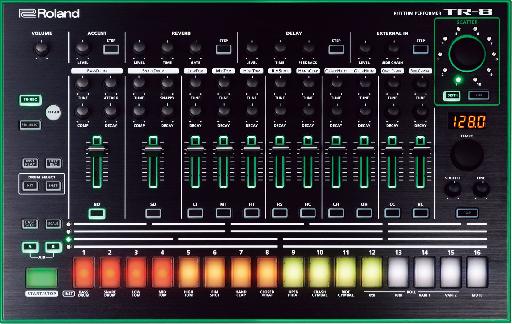 Now though, Roland is back with the TR-8, part of its brand new AIRA range. A 'Rhythm Performer', it incorporates the company's new Analogue Circuit Behavior (ACB) technology to faithfully model the exact components, sounds and operation of the original 808 and 909 models, based on Roland's own designs.

It's surprisingly lightweight but feels solid and well built. Around the back is MIDI I/O, phones and stereo mix out, two assignable outputs and stereo audio in, so you can route other signals through the unit's effects. There's USB audio and MIDI to and from your computer, though no power over USB since the unit is too large. It syncs easily with other models in the AIRA range.

"The front panel is a wonderland of backlit controls."

The front panel is a wonderland of backlit controls, with the 16 buttons representing the drum pads each containing multiple colored lights that change based on their currently selected function. There are 16 drum kits, 16 patterns and up to 32 steps per pattern which taken together isn't loads, but it's generally better to do a few things really well than to try to do everything and fall short. 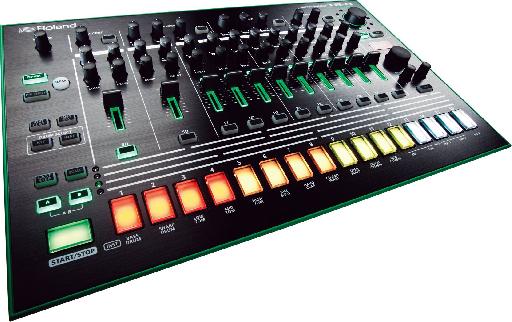 Of course the TR-8 is more advanced than its predecessors but some of the basic concepts remain. There's an evolved version of the TR-REC pattern creation technique and you can easily program in rolls and variations, using the 16-step sequencer to switch between variations A and B with continuous playback.

"With the TR-8 you can create some amazing cut-up effects while staying perfectly in sync."

Each individual drum sound is tweakable and there are tune, attack, compression and delay knobs available directly on each one as well as a level fader for quickly mixing your kits. Reverb and delay effects can be controlled using the sections at the top, and accents can be added to steps to create more involving patterns. There's tap tempo, shuffle and fine tuning of tempo too so you have complete control, plus it can all be synced via MIDI of course.

Like the TB-3, the TR-8 has the new Scatter effect built-in, but here it's more advanced. A knob at the top right hand corner lets you activate up to ten scatter effects and each one has ten levels. These perform various kinds of glitch, stutter and reverse effects on the beat and sound incredible. By punching the effect in and out and changing type and depth as you do, you can create some amazing cut-up effects while staying perfectly in sync.

There's much more to know about the TR-8 and you'll find detailed information on Roland's website. Suffice it to say, however, that this is an amazing sounding drum machine with some groundshaking bottom end, crisp snares and all the sonic character you'd expect. Brought up to date with computer integration, the cool Scatter effect and a dazzling lightshow that it does when left untouched for a few minutes, it's fun, powerful and intuitive to use.

"This is an amazing sounding drum machine with some groundshaking bottom end, crisp snares and all the sonic character you'd expect."