All Articles Review
Review: Roland DJ-202
Sara Simms on Wed, November 22nd 0 comments
2 channels, 4 decks and even a built-in sequencer. Could Roland's DJ-202 be the ultimate portable controller for DJs and performers? Sara Simms finds out.

Roland's latest offering for DJs is the DJ-202, a two channel, four deck controller with a built in sequencer. The DJ-202 promises DJs the features and layout of a professional controller in a smaller, portable unit. I put the DJ-202 through its paces in my studio and discovered that it's fun to use and offers more than a few unique features. Read on to learn more... 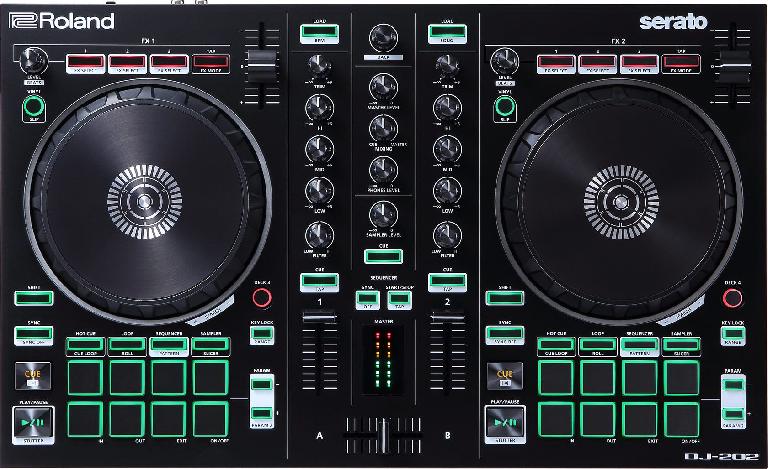 The DJ-202 is a portable yet rugged two channel controller that offers four deck mixing capabilities and comes packaged with and mapped for Serato DJ Intro. The top panel of the controller features three sections: browser, decks and the mixer. A main feature of the controller is two large jog wheels that feel solid and are well-constructed. The front panel features a 1/4” phones jack, while the rear panel features a USB port, a MIDI out port, a pair of RCA outputs for the Master Output, a 1/4” Microphone In jack and a Microphone sensitivity knob. 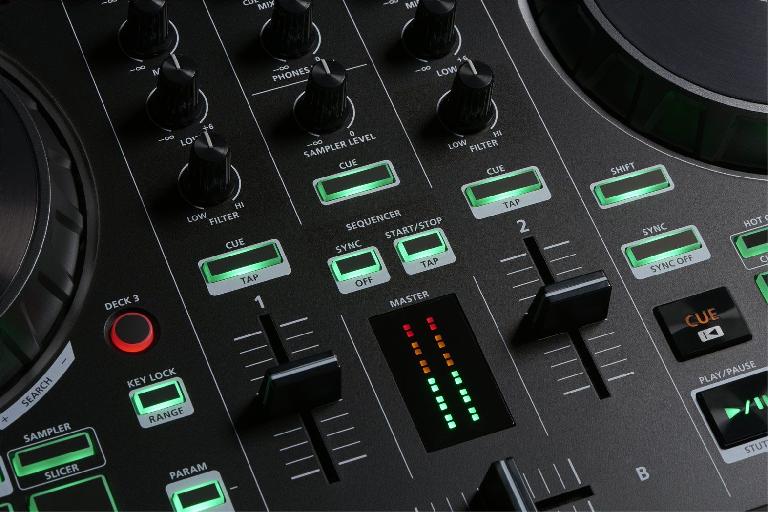 In the centre of the DJ-202 is the mixer section. The mixer layout is basic and DJs will find it easy to navigate. At the top of the mixer section is a rotary controller for scrolling through Serato's crates and a Load button for loading songs into the software's Decks.

Moving further down the mixer, each of the DJ-202's two channels feature controls for Trim, a Three band EQ, a Filter, Cue and a Channel Fader. In the centre of the mixer are controls for the Master Level, a control for mixing Cue/Master Level, Phones Level and Sampler Level. The Sampler area is featured in the middle of the mixer, as well as Cue and Level control for this section. 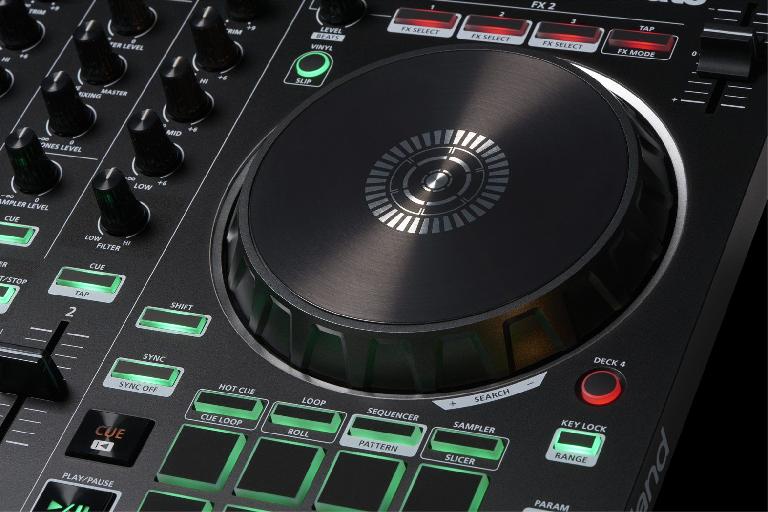 The Deck section is well thought out and features a lot of functionality in a small amount of space. The DJ-202's large jog wheels are one of the main features in this section. They are solidly constructed, can be used for basic scratching and respond quickly to movements. The Deck Section features traditional controls such as Play/Pause, Cue, Sync On/Off and Key Lock. There's a small button that switches Deck One to Deck Three and Deck Two to Deck Four. The four deck mixing option gives DJs more versatility, yet presents a challenge as the mixer shares the controls for two decks. The four channel/two deck mixing configuration gives DJs flexibility, but means that they must pay careful attention to the Deck they're making adjustments to.

On top of the mixer is the FX section which has three FX slots for Serato FX and a Level control that controls the Dry/Wet of all of the FX. Each effect can be turned on or off individually. To the right of the FX section is the Tempo slider, which is in an uncommon yet useable position. 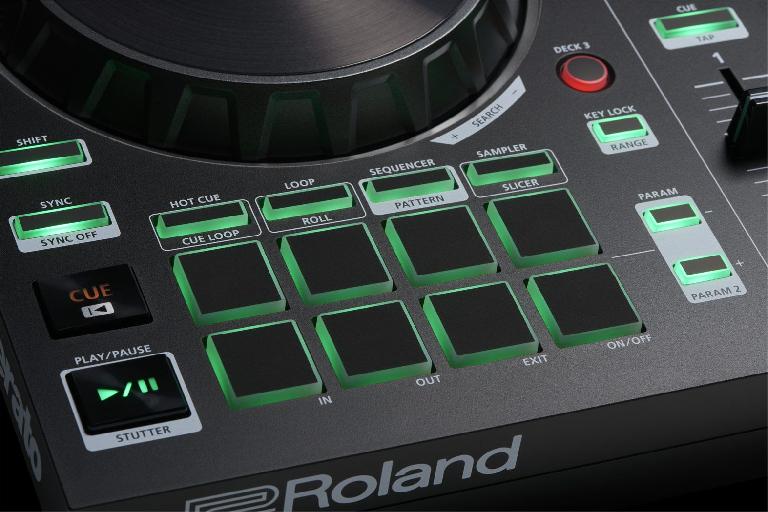 A great feature on the DJ-202 is the Pad section, which offers modes for Hot Cue, Loop, Sequencer and Sampler. The Looping section works well and I like how adjustments can be made to the start point of the Loop using the Jog wheel.

The Sequencer is a unique feature on the DJ-202 that really sets it apart from the other controllers on the market. It comes loaded with eight built-in drum kits from Roland's TR-808 and TR-909. (A kit for the TR-606 is coming soon!) The samples themselves sound great and once DJs push past the sequencer's slight learning curve, its a joy to program. The sequencer can be synced to the tempo on the DJ-202 so that newly programmed drum patterns can play in sync with the tracks. Samples can be loaded in Serato and sequenced, adding to the DJ-202's creative uses. Patterns and kits can be backed up onto a computer via USB, meaning you'll always be able to save your creations.

'Under the Hood' System Settings 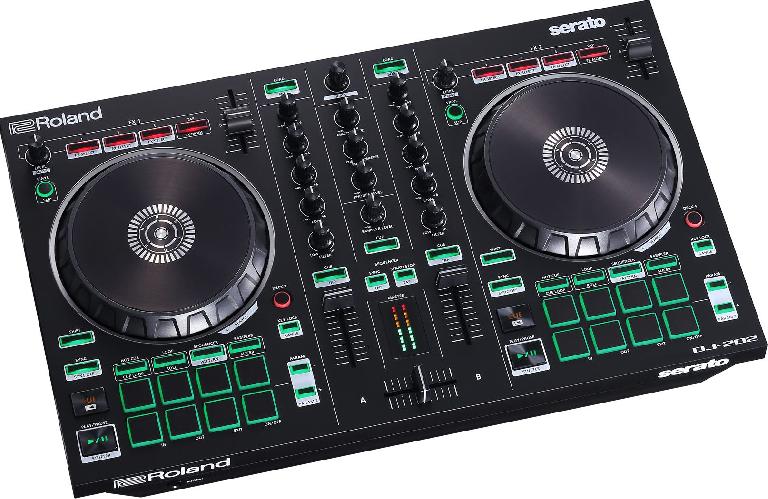 The DJ-202 features some interesting 'under the hood' settings that allow the controller to be modified in useful ways. In the System Settings, effects like Reverb and Delay can be added to the Microphone. In addition, the brightness of the LEDs can be adjusted and the reference level of the Master Output can be changed. Its worth delving further into the controller's manual to fully explore what this powerful controller is capable of.

The DJ-202 was a pleasant surprise as it proved that good things can come in small packages. My favourite features on the controller are the Sequencer with the on-board Roland TR-808 and TR-909 sounds, as well as the fact that the mixer can be used to mix four decks. The DJ-202 packs a ton of features into a small footprint and this is a solid investment for beginner or intermediate level DJs who are looking for a forward-thinking Serato controller.

-Offers up to Four Deck Mixing

-More output options, a booth output and Microphone XLR input could have been useful