All Articles Review
Review: Soulsby Synthesizers Oscitron
Scott Riesterer on Mon, March 27th 0 comments
With a unique wavetable PWM synth engine, a huge selection of waveforms and filters and wavetable capture via audio input, could the Soulsby Oscitron be the synth of your dreams?

The Oscitron from Soulsby Synthesizers is a lot of things. It’s their first Eurorack synthesizer product. It’s an 8-bit digital oscillator with wavetable sampling, selectable audio engine resolution, multiple filter types, scale quantization, portamento, bit reduction and preset memory. Amazingly, they managed to squeeze all this functionality into just 14HP. This is achieved through the clever use of two knobs that also function as buttons.

You Know I Got Soulsby

The top function knob has two menu rings, and pressing it toggles between the red and green menu sets. This selects the page of parameters that the bottom button will edit. Additionally the Oscitron has knobs to control fine tuning, pulse width, filter frequency, filter resonance, and phaser offset. It provides 1v/Octave CV inputs for pitch and filter cutoff frequency, as well as inputs for pulse width, filter resonance and phaser position. There is also a clock and audio input for sampling new waveforms. 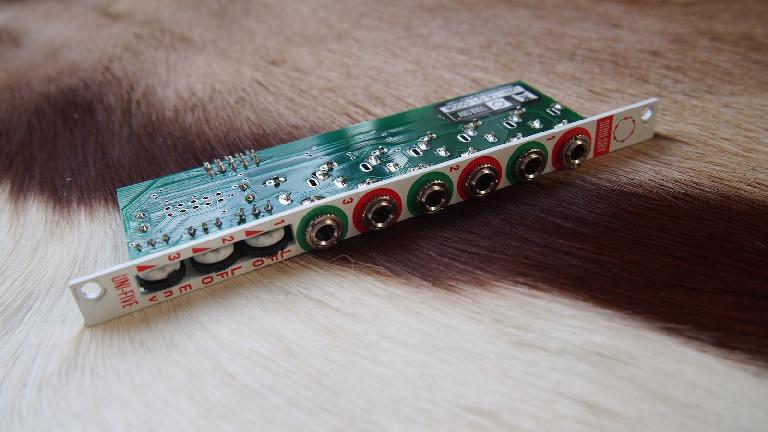 I was pleased when I opened the box to see both a detailed manual, a quick reference card, plus a cute pair of mini wood cheeks. I really appreciate it when manufacturers make this kind of extra effort. I generally prefer hands-on manuals to PDFs and I’m a sucker for wood cheeks on synths. Another unexpected discovery in the box was a little 2HP module called the Uni-Five with its own reference card. I reached out to Paul Soulsby to ask him about the Uni-Five and he was happy to give me a thorough explanation.

Paul explains : "the reason for the Uni-Five module is partly because the Oscitron is digital and partly to do with Eurorack theory! Like the Atmegatron, it’s 8-bit digital and only recognises voltages between 0V - 5V. In fact, voltages outside of this range would cause damage, but luckily it has loads of protection against this. If anything is connected out of that range it’ll just clip it to either 5V or 0V.  There’s two approaches to deal with this in the Eurorack world, where anything between -10V and +10V is fair game. I can have on-board attenuation, but the issues with that are: What kind of attenuation do I provide? Bias, attenuation, both, and over what voltage range? Or I can say: better to handle all bias and attenuation myself, so I can customize it for my own system."

He continues: "when I developed the module, I felt that user customization was more appropriate. However, when I got to beta testing, users kept wanting to put a bipolar LFO into the filter, to make it go wah-wah-wah(!) and found the negative part of the LFO cropped off. I decided it should have some biasing and attenuation for the most common situations (5V LFO and 8V envelope). So I had the option to redevelop the entire product (which would have increased the HP and would have needed all parts prototyped again), or create a separate module, which would be much quicker, cheaper, and simpler, and could also be used with other 5V modules. So that’s basically the option I went with!"

Therefore, the Uni-Five is not necessary for the Oscitron, but it’s a useful tool that allows you to effectively shape the control signals sent to the modulation inputs. I did find that sending full range signals and having them clipped produced some interesting results, so it’s worth trying that too. 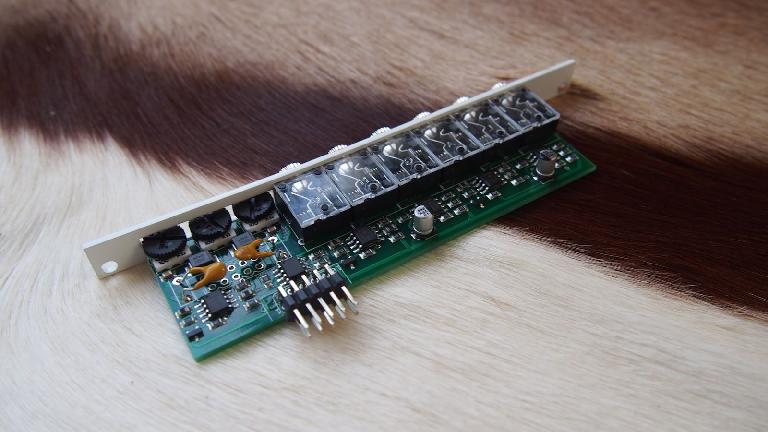 The Oscitron has two banks of 16 wavetables each. There’s a few from the Juno 60, a couple of Casio CZ-101, Multivox and PPG waveforms, and a pulse wave (that I had to look up) labelled RP2A07. It turns out that this is referring to the Ricoh RP2A07 chip used in PAL format Nintendo systems. These waveforms will sound quite different depending on the setting used for the audio engine. Resolutions of 16, 32, 64, or 128 samples will determine whether the timbre of the oscillator is more gritty or complex. There’s further potential to add lo-fi grit and grunginess with the wave crusher. The various wave crusher options reduce the bit depth and sample rate of the waveforms rather than the audio signal.

A slow melody cycling through the various audio engine resolutions.

The Wavetable sampling feature really excited and intrigued me before I received the unit. The Oscitron can either take a gate signal to trigger recording of a wavetable, or a clock signal to continuously record new wavetables. The length of the sample can be set to one of 8 settings ranging from 4 to 252 samples. I really enjoyed using this technique on a simple drum loop, but I also discovered some interesting timbres using my voice. 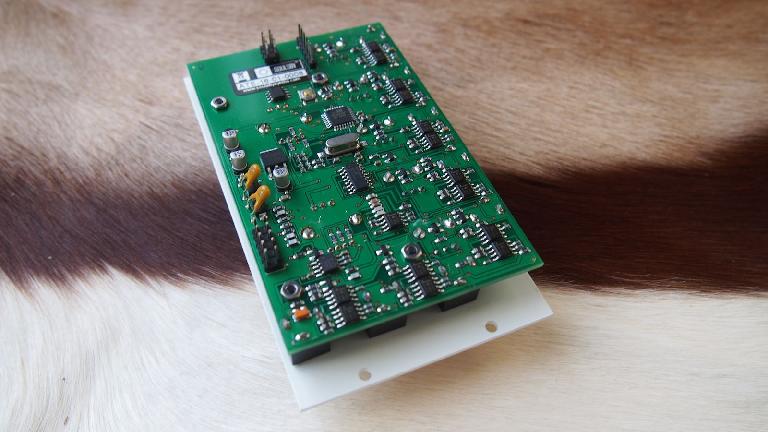 The clock input is actually much more than the label would suggest, as it can be assigned to one of 16 different functions. Effectively, it lets you set the clock input as a modulation source to toggle through settings of the various parameters such as wave shape, filter type, wavecrusher setting and so on. This opens up some powerful potential for your patches to evolve in interesting and dramatic ways.

Oscitron boasts 16 different filter types, with the usual high pass and low pass offerings, but also some parametric EQ settings with different levels of gain. With certain settings of the audio engine and wavecrusher, the filter resonance can produce some unexpected lo fi overtones and aliasing, really showing off the character of this 8-bit gem.

With so many features available to control, thankfully the Oscitron has the ability to save and load presets to 16 memory locations. If you’re so inclined, the unit can also be reconfigured by programming and uploading new software. It was created using the Arduino platform and the existing software is available for download and hackery.

The scale quantization feature makes it easy to create fun chiptune style arpeggios by feeding it LFOs and envelopes. 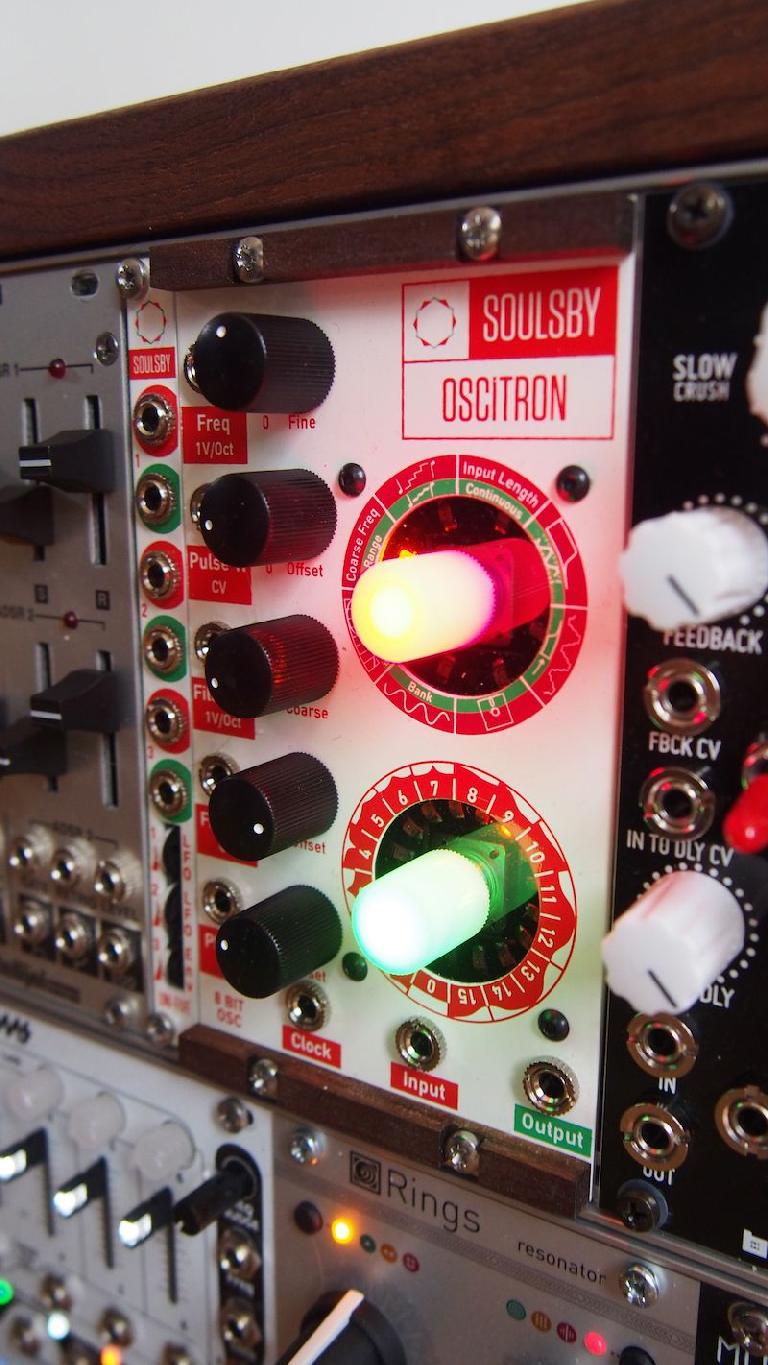 The Oscitron delivers  great value for your budget and your rackspace with an extensive feature set that is bound to provide new discoveries for years to come. It offers great lo fi digital character, ranging from gritty to smooth and an elegant user interface that allows for fairly quick navigation. The reference card is handy to have nearby to help you learn the main functions behind the menu symbols, and the manual has further detailed information with charts and tables. There’s a definite advantage to adapting an existing product to Eurorack. Soulsby didn’t need to reinvent the wheel when they made the Oscitron from the framework of the Atmegatron, but they were able to bring something new and unique to the (wave) table.

Cons: 0-5v range requires an attenuator like the Uni-Five or it will clip your modulation input. Easy to lose track of active settings.