All Articles Review
Review: Traktor Kontrol Z2 Mixer
Sara Simms on Wed, July 31st 0 comments
Language
Native Instruments have a 2+2 channel DJ mixer? Yup! And as you'd expect it's designed for Traktor, but can be used as a standalone DJ mixer too. Sara Simms pushes and pulls in our full review. 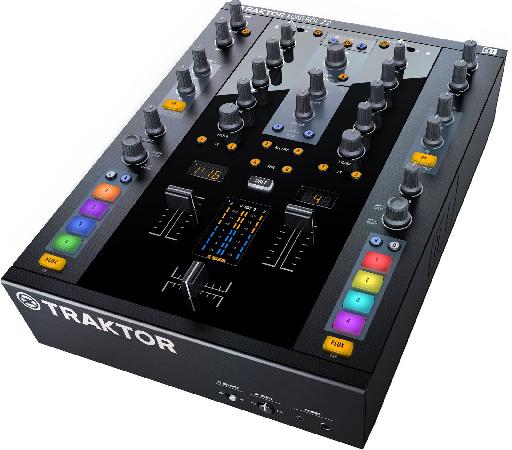 The Traktor Kontrol Z2 is Native Instrument's first 2+2 channel DJ mixer, and combines together the best of both digital and analog worlds. Built for professional club use, the Z2 is a powerful stand-alone mixer, with Traktor Scratch Pro and an additional two channels for Remix Decks built into the package. The Z2 is sure to become a favorite amongst turntablists and club DJs alike, given its versatility, intuitive layout and attractive yet sturdy build.

The Z2 is a two channel mixer, and can be used as an analog mixer for classical DJing. The mixer also functions as a DJ soundcard, and is compatible with Traktor Scratch. This means you can use the Traktor control CDs or vinyl that come with the mixer to control your digital music, and Traktor Scratch software. Best of all, it can function as a MIDI controller for Traktor Scratch, and control the new features included in Traktor 2.6. Forward-thinking DJs may be happy to learn that the Z2 also offers advanced HID integration with CDJs.

The Z2 is designed as a scratch/battle style DJ mixer, and offers DJs full control of Traktor's four decks. 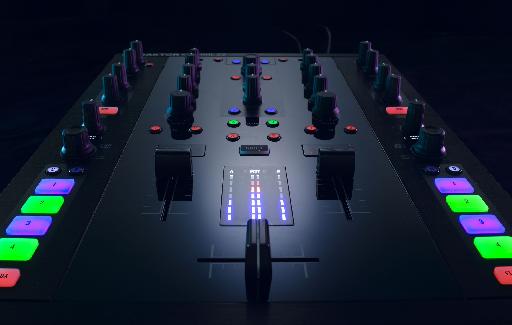 Channels One and Two can be used for your main Decks in Traktor (Decks A and B) and each have a dedicated channel fader and EQ section. These two main channels give you control over Traktor's features, including FX, cue, sync, loop and load features. I like the fact that Native Instruments has chosen to include a large filter knob, which comes in handy for mixing.

The additional Decks (Decks C and D) can be controlled by a single auxiliary volume knob on the mixer. These decks are best suited to Traktor Remix's decks, or for dropping samples and loops into the mix. Beneath the auxiliary knob is the loop encoder button, and four cue buttons, that can be assigned to Decks A/C or B/D. Each of the channel faders and the cross-faders are innofaders; a reputable fader brand made from specially designed steel rails, and constructed to withstand heavy DJ use.

The Z2's layout is based on an industry-standard design, which is sure to make you feel instantly comfortable performing. The mixer section is spacious, and allows enough room for performing scratch, juggling and/or controllerism routines.

Constructed from an ultra-stable, aircraft-grade aluminum chassis, the Z2 is a mixer built with quality in mind. It features the standard Native Instruments knobs, buttons and encoders that you'll recognize from the NI line of controllers. The backlit buttons allow you to see the mixer's controls even in dark environments. The Z2 delivers great sound quality from its low noise audio power supplies, Cirrus Logic converters and premium 24-bit soundcard. The Z2 is meant to be used alongside Traktor 2.6 (or later updates). Traktor 2.6 includes three new innovative updates that allow increased creative control, and can be accessed directly from the mixer.

The Macro Effects are a new feature in Traktor that combine multiple effects to a single knob. Traktor has made it easy for you to apply interesting sonics to your sets, without having to take the time to program a complicated FX chain. They've even created a whole new variety of Macro FX, with interesting names like: Wormhole, PolarWind and Zzzurp.

Traktor 2.6 allows you to choose to apply your effects pre or post-fader, giving you more kontrol.

Flux mode tracks the time while you loop, re-edit or scratch the track live, and lets you drop the track back in at exactly the right time. The track comes back in to where it would have been if it had run uninterrupted. It's a feature that gaining popularity on a range of new DJ equipment in the industry.

The front panel of the mixer is fairly simple; you'll find a cross-fader reverse (or 'hamster' switch),  a cross-fader curve adjust, and a 1/4' headphone input jack. 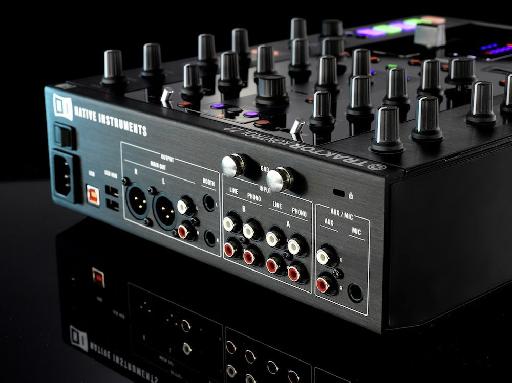 On the back are two line and two phono inputs, two ground posts for the phono inputs, an aux input, and a TRS microphone socket. On the output section, there's a balanced XLR and unbalanced RCA main output, and two balanced 1/4' booth outputs.

There's also three USB ports on the back, one main computer USB socket, and two hub sockets. These can be used for connecting your other Native Instruments controllers, such as a Kontrol X1, or F1.

The back panel also features an AC power input, and an on/off switch.

This flexible mixer can be easily integrated into any DJ's setup.  Here's a few forward thinking setup ideas you may want to consider: 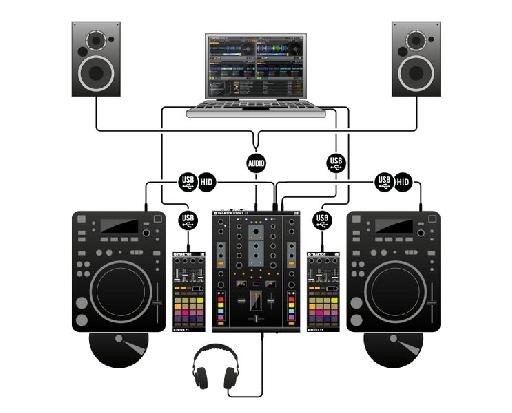 This setup shows the Z2 alongside the latest CDJ models; Traktor's Advanced HID integration allows for quick setup with CDJs, and allows you to browse your Traktor collection or trigger cue points directly from the unit, with visual feedback on its display. 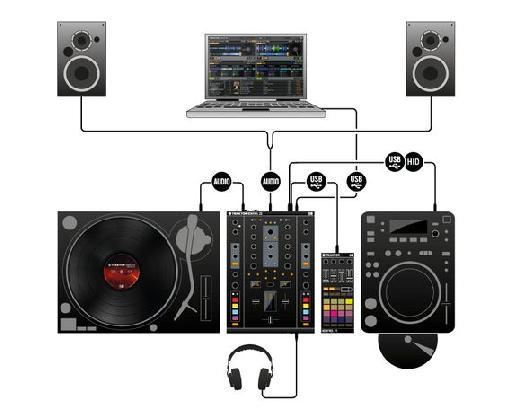 This "hybrid" configuration shows how the Z2 can be used as the centerpiece of an advanced setup. '¨'¨Traktor Scratch timecode control is used next to a DJ CD player, connected via Advanced HID integration. Additionally, the Traktor Kontrol F1 gives you hands-on access to all 64 slots of a Remix Deck for loops and one-shots, and can be mixed in via the 'Deck D' knob on the mixer. 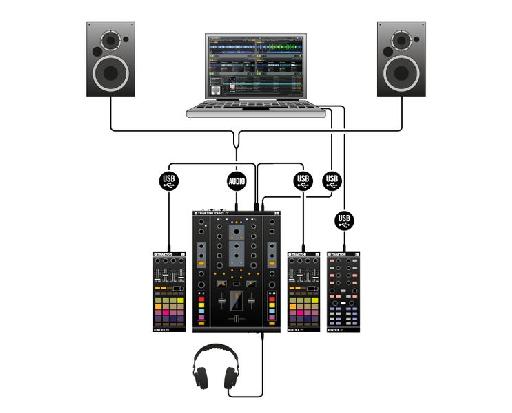 This setup is is ideal for DJ-producers who want to be able to improvise during their sets, and create exciting, unique performances.

In this example, the X1 gives in-depth control of track decks 1 and 2, while decks 3 and 4 are used for Remix Sets controlled via the F1s.

I was personally impressed with Native Instrument's first stand-alone DJ mixer; its a professional quality build with excellent sound quality. The Z2 includes a few unique features, including the Macro FX control knobs, and the addition of USB ports on the back. Turntables will appreciate the three innofaders, which make the Z2 a solid choice for those looking for a scratch/battle-style mixer. Traktor users will appreciate its seamless integration with the software, and ability to control many software features directly from the Z2. Priced at less than $1, 000, the Z2 is an affordable option for those looking for a futuristic, stand-alone DJ mixer.

The Not So Good: