All Articles Review
Review: TronicalTune (Automatic Tuning for Serious Guitarists)
Andy Bowen on Tue, March 4th 0 comments
Language
A guitar that can tune itself? It's something many guitarists have dreamed of. TronicalTune, a clever bit of auto tuning kit, is designed for the pro & amateur crowd and Andy Bowen gives it spin. 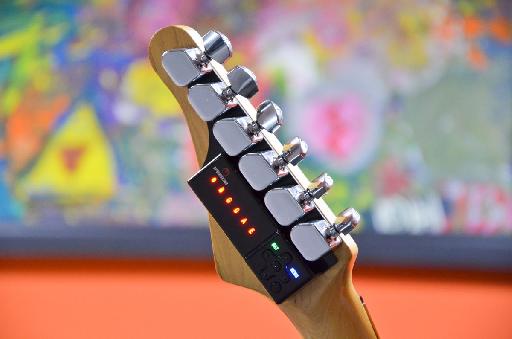 Ask any guitarist for a tour of his rig and you'll probably find a road-tested BOSS TU-2 or one of TC Electronic's PolyTune pedals. And while each stompbox brings a unique functionality to the table, like bypass routing or polyphonic capabilities, respectively, they both have one thing in common: the grunt work is left to the guitarist. That's where Tronical comes in.

Admittedly, the idea of automatic tuning is reminiscent of products geared toward the beginner or 'Guitar Hero' musician; take Rock Band III's hybrid guitar/controller for example. Antares' Auto-Tune for Guitar system managed to break new ground when it hit the market a few years back. Though, most serious players would never perform while relying on a digitally corrected render of their axe's intonation and tuning, much less record with it. At that point, you begin to lose bits and pieces of its uniquely copper and solder soul. The magic of the TronicalTune, however, lies in robotic tuning heads. Its mechanical approach isn't susceptible to the same criticisms as Antares' software-based rig'"which potentially makes it the world's first professional grade automated tuner.

If the TronicalTune looks familiar, it's probably because you've seen it before, only by a different name. Originally, it was known as the Min-ETune, found exclusively on higher-end Gibson guitars like the Firebird X. But in early 2013, Tronical gave it a rebranding and added more than a few variations, each one with a form and style compatible with most any standard guitar on the market. But enough history'¦ let's get tuning.

Tronical managed to cram quite a bit into an impressively unobtrusive, $300 package. From the front of my Alvarez Classic, the TronicalTune I use (type C1) barely peeks out from behind the headstock. Flip the guitar around and you'll find a rectangular LED display module surrounded by six self-contained roboheads, all powered by an exchangeable, rechargeable battery good for approximately 300 tunings. To the right of the display are the six buttons responsible for navigating the tuner's features: a D-Pad with a centralized 'Enter' option, as well as an 'On/Back' button located at the bottom right of the housing.

In terms of functionality, the TronicalTune performs like a clip-on tuner and measures the frequency of your strings resonating in the headstock, only in automated fashion. Once its sensors lock on, which is almost instantaneously, the roboheads kick in and wind away. Or, you can go old fashioned and tune your guitar by hand whether the battery is dead or not. Manually turning the roboheads produces a high-pitched grinding sound that will make anyone feel like they're doing harm, but it is indeed a normal function. 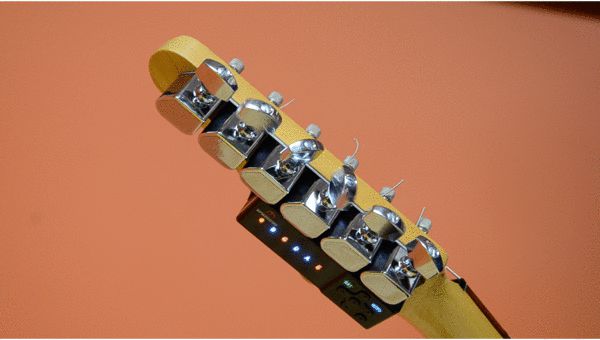 Between three banks (RED, GREEN and BLUE), there are six customizable and 12 factory presets to choose from when tuning; 'DADGAD,' 'Dobro,' 'All 4th,' etc. Though before diving right in, it's pertinent to mention that there are two distinct tuning modes: single- and multi-string. (As you may have guessed, single-string mode tunes one string at a time, whereas multi-string mode tunes all six at one.) In addition, there are also two different ways to tune your guitar.

For what I like to call a 'quick tune,' simply power up the device by pressing the 'On' button and it will be armed with the last preset that was used. Give the strings a quick, even strum, then wait four to five seconds (multi-string mode). By that time, most of the LED indicators for each string will be green or flashing yellow. Proceed to palm mute the guitar and see which indicators are red, then pluck them accordingly one at a time (single-string mode) and let the roboheads take care of the rest. Depending on how badly out of pitch your instrument is, a complete tune-up takes only 10-20 seconds. In comparison, that's just as quick as a thorough manual job. Using a factory or user present requires two presses of the 'On' button and use of the D-Pad making the selection, otherwise it follows the same structure.

Regardless of features or extra goodies, the TronicalTune would be less than practical if it couldn't survive in a performing environment. Thankfully, it passed several live tests with flying colors. Small venue settings with minimal stage volume didn't seem to phase the tuner's accuracy. Nine times out of ten, whether tuning during or between songs, I was completely satisfied with the pitch of each string, right down to the cent. It wasn't until cranking the onstage cabs before I noticed a slight increase in tuning time'"some of the strings even seemed to bounce back and forth, never landing on the right pitch. However, I was able to more or less overcome the issue by simply putting a good distance between myself and the wall of sound.

In situations where my strings were extraordinarily out of tune, the TronicalTune did require a bit of manual guesstimating before it could lock in on certain strings. I also found that switching from severely dissimilar tunings, like from standard to drop C, took at least two passes before the strings were ready to go (it's worth noting that my guitar packs a floating bridge, so results may vary for those with a stationary model).

On a slightly different note, I immediately found that performing with the TronicalTune allowed me to maintain eye-contact with the audience while simultaneously tending to that ever-cursed G string: an unexpected, yet interesting perk. 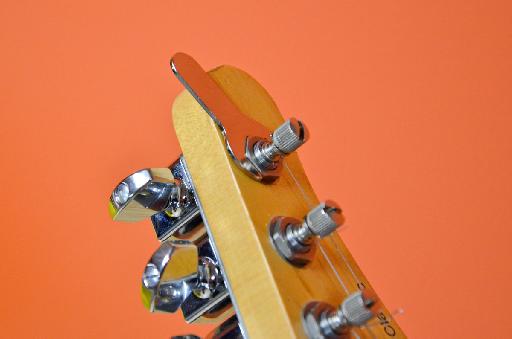 Installation is another major area where the TronicalTune outshines Antares' system'" the process requires no modification and takes less than 20 minutes from start to finish. Tronical's website hosts an assortment of printable templates to compare with the pin placement on your instrument's headstock. From there, retrofitting your guitar is almost as simple as swapping out the old with the new. But if you're shredding something of the rare variety, (a custom warrior perhaps), the holes in the TronicalTune's mounting board are large enough to accommodate some leeway. For instance, none of the templates matched perfectly with my Alvarez Classic, but since each robohead is separate from the others, I was able to shift each one slightly around until it fit; as long as each tuning mechanism lines up with conductor plates on the baseboard, there should be no problem. Otherwise, they won't have power, which happens to be inconvenient for robots.

It's obvious that Tronical took their design seriously from the ground up, in that almost all of the tuner's settings are completely adjustable and relevant to the dedicated guitarist. Out of the box, its accuracy, robohead speed and delay, button functions and interference level are optimized for best performance, but each can be honed in to compliment your guitar's strengths and correct its weaknesses. Personally, I found that a lower interference level and slight robohead delay gave me the quickest and most precise tuning experience.

There are also three different system configurations that can be tweaked: guitar type, gain and pitch window. Choosing the right guitar type is essential for the best performance, as acoustic and electric guitar strings behave differently and require a different amount of torque from the roboheads. Though, the manual warns against altering the gain and pitch window unless there are certain issues that can't be resolved in with the basic settings. 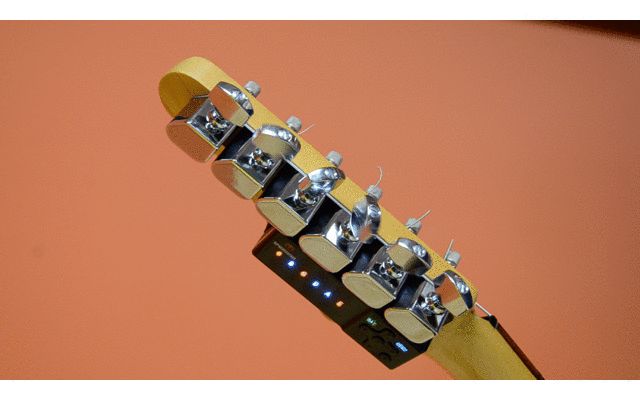 The territory of automatic guitar tuning is vastly uncharted, so comparing the TronicalTune with another device is, well, difficult. That being said, it's a fantastically capable first generation product. At $300, it's probably that of a luxury for most guitarists, but Tronical's convergence of mechanical fortitude and analog tradition truly has exciting potential.