In the world of analog 'character' compressors and their digital emulations, one of the most respected names is dbx, and perhaps their most classic model is the dbx 160'"the very first compressor design from the company. dbx was founded by David Blackmer in 1971. Blackmer is most known for his VCA (voltage-controlled amplifier) and RMS detection circuit designs. The 160 was the first compressor from dbx, and utilized those technologies to achieve its unique characteristics.

Early compressors often had relatively slow response times'"the famous LA-2A, with its optical circuit, is a good example of this. VCAs are fast, making them more suitable when you really need to clamp down hard on a signal. But the trick is to ensure that such a compressor sounds 'musical''"that it doesn't introduce an unpleasant gain reduction characteristic, sucking the life out of the sound. The 160 achieves this with its combination of the Blackmer VCA and RMS detection circuit. The original 160 (and the Waves emulation) had only Threshold, (continuous) Ratio, and Makeup Gain controls'"attack & release were determined by the circuitry. A very fast attack and a slightly less fast release give the 160 a musical quality. Though it can be pushed to the point where its action is quite noticeable, even when driven hard it can still add something desirable, especially to instruments with strong transients, like drums and bass.

There is one important point to make about the 160. People who know the dbx name will probably also be familiar with one of their marketing buzzwords'"'over-easy' compression. This refers to a compression circuit that begins to apply gain reduction more gradually as the signal approaches and crosses Threshold, instead of abruptly, as soon as Threshold is crossed. This behavior'"often referred to as a 'soft knee''"is common to many vintage compressors, and it's also a feature of many dbx models, but not the 160. dbx's 'over-easy' behavior was introduced in the 165, a later model'"the original 160 (and the Waves model) is a 'hard knee' compressor, giving it a more aggressive characteristic. This is part of what defines the 160'"it can clamp down on just about anything, hard, and yet still retain that elusive 'musical' quality so prized.

In collaboration with dbx, Waves set out to model the original 160, emulating the response of the classic VCA and RMS detector designs, along with the distinctive non-linearities of the hardware unit's discrete circuitry, to capture the characteristic quality of this classic compressor. So how did they do? Let's take a look at the Waves dbx 160 and find out. 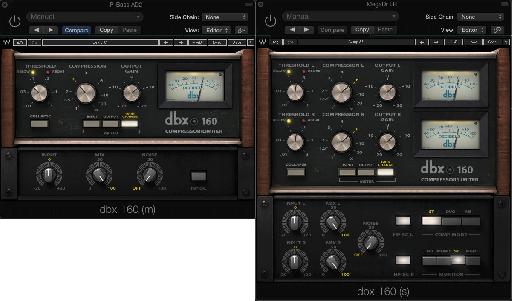 The Waves dbx 160 is a faithful recreation of the original, but there have been some additions, to enhance the feature set and simplify common studio compression techniques. The front panel of the Waves plug-in has the same layout as the original'"Threshold, continuously variable Ratio, and makeup Gain. Just as in the hardware unit, attack & release are a function of the (virtual) circuit design, which, as I already mentioned, emulates the Blackmer VCA and RMS detection circuits. There are level indicators for signal below (yellow) and above (red) threshold, and, of course, there's the big VU meter'"the defining visual element (the original is often referred to as the 160 VU to distinguish it from later models).  The meter can be switched to display input, output, or gain change. An additional control panel can be kept hidden (for a more vintage look) or displayed, via the 'Collapse' button, and contains a number of features that Waves has added to provide greater utility.

In this extra panel, there's an input (calibration) knob, and Waves' standard 'Noise' option. The latter allows you to either add in noise and hum that would be typical of the original unit (for that last degree of realism), or keep the signal path clean & pristine (the default).

Like the original, Waves' 160 is a Feed-Forward design, utilizing a side-chain for signal detection.

Waves has added the option of a highpass filter in the detection sidechain (HP-SC), to minimize the compressor's response to low-frequencies, which can help provide a smoother response to low-frequency instruments, like kick drum and bass. Waves also includes a 'Mix' knob, which lets you blend the uncompressed signal with the compressed signal, facilitating parallel compression without the need for extra routing and auxes'"this is a convenience that's becoming more common in virtual compressors, and Waves was smart to include it here. The 160, with its fast response and aggressive character, works well for parallel compression'"I used to have a similar dbx model, and used it in that mode all the time for drums, to excellent effect.

While the original was strictly a mono device (later models were stereo), the Waves plug-in is available in both mono and stereo versions. The stereo version features Waves' standard enhancements'"the ability to run the plug-in in linked stereo operation, split stereo, for independent L & R settings, or M-S (mid-side) mode, where L controls the Mid, and R the Side.

I ran a bass and some drums through the Waves dbx 160. Bass was always one of the most popular applications for the original 160'"I used my studio's dbx on it regularly'"and the Waves version does not disappoint. It clamped down nicely on several bass tracks with wide dynamic swings and sharp pop & slap transients'"just as its hardware namesake is famous for. On drums, it added some nice 'push', while keeping transients in check.

Like the original, the Waves version is fast and aggressive'"I found that employing the highpass filter sometimes helped  keep low-end signals sounding full under heavy compression, and I was glad Waves decided to add it in. Likewise, the Mix control proved handy'"a strongly compressed signal can be dialed back just a little by blending in some of the original, and it's a quick and convenient way to fine-tune the balance between 'squash' and 'snap'.

I've had the chance to test several of Waves' analog emulations of classic gear, and they've all captured the essential character of the hardware they're modeled on. The Waves dbx 160 continues that tradition'"it has the classic, 'punchy' sound you expect from any compressor with the name 'dbx' on it, and the extra features Waves provides are a welcome workflow enhancement. If you're looking for a tight, fast, compressor, with a vintage character, and a proven track record, you can't go wrong with Waves' dbx 160'"another excellent addition to the virtual vintage toolbox.