All Articles News
RT-311 Swarm Is An Advanced DSP-Driven Eurorack-Compatible Oscillator Module
Rounik Sethi on Tue, March 28th 0 comments
Announced at NAMM 2017, the RT-311 Swarm Oscillator from Radikal Technologies, a eurorack-compatible oscillator on steroids, is now shipping. Check out what it's capable of below.

MÜNCHEN, GERMANY: having turned heads, opened ears, and blown musical minds with a successful showcase at The 2017 NAMM Show, January 19-22 in Anaheim, California, high-quality synthesizer developer Radikal Technologies is proud to announce availability of its RT-311 SWARM OSCILLATOR — an advanced DSP-driven Eurorack-compatible oscillator module that, as implied by name, goes far beyond the realms of standard oscillator fare, firstly thanks to two oscillators that can both build swarms of (up to eight) oscillator ‘clones’ capable of being pitched in musical intervals, chords, clusters, or fat detunes, dutifully backed by having all parameter settings saveable as interpolatable snapshots, enabling even more radical results — as of March 28...

A dictionary definition of swarm typically reads: a large number of things... or oscillators, in the case of Radikal Technologies’ radical RT-311 SWARM OSCILLATOR, which, when switched to its highest SWARM setting, sees a maximum of 16 oscillator ‘clones’ running simultaneously. Something that stands out from the sound of the (ever-expanding Eurorack modular) crowd — to (partially) paraphrase the early-Eighties British breakthrough hit from synth-pop pioneers The Human League (themselves no strangers to the small-format modular system popularised by fellow German developers Doepfer Musikelektronik) — and surely something to behold? But building swarms of oscillator clones using both (OSCILLATOR 1 and OSCILLATOR 2) banks’ specialised set of TUNE, OCTAVES, DENSITY, SPREAD, and DETUNE controls to create pitched musical intervals, chords, clusters, or fat detunes does not necessarily mean that all 16 of those clones have to sound simultaneously. 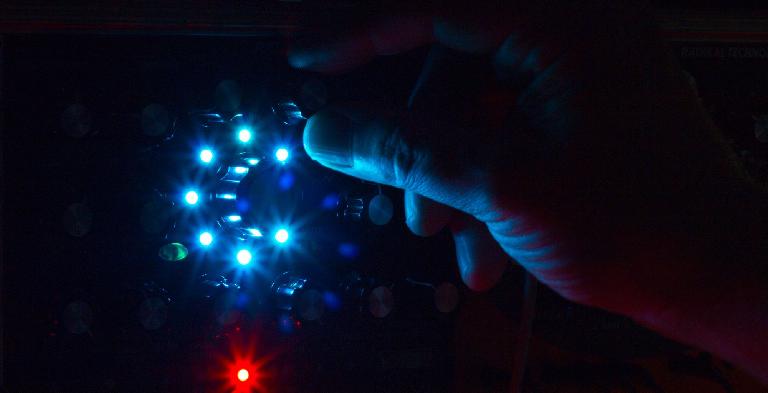 Switched into its default startup Manual-Mode of operation, the RT-311 SWARM OSCILLATOR can function much like any other Eurorack-compatible all-analogue oscillator out there with OSCILLATOR 1 and OSCILLATOR 2 respectively appearing at the two (OUT 1 and OUT 2) outputs as sound sources for further manipulation elsewhere — using Radikal Technologies’ own RT-451 DUAL MULTIMODE FILTER module, for instance.

In this scenario, the sound of the RT-311 SWARM OSCILLATOR module matches exactly what would be expected from the potentiometer-controlled parameter positions on its 32 HP (Horizontal Pitch) sized front panel; putting yet more controls at adventurous users’ fingertips, both banks of oscillators feature WAVE controls for smooth transitions between waveforms and TLM (Timelinearity Modulation), a variation of pulse-width modulation — known from Radikal Technologies’ SPECTRALIS 2 ANALOG SYNTHESIZER/ BEATMATRIX/FILTERBANK desktop hybrid — that can be applied to all waveforms, while exponential FM (Frequency Modulation) and linear FM modulation or PM (Phase Modulation) are also available alongside oscillator synchronisation. Pitch is, of course, controlled by the (calibrated) 1V/OCT input (which can be quantised so that only pitches of a certain tone sequence or scale are output). 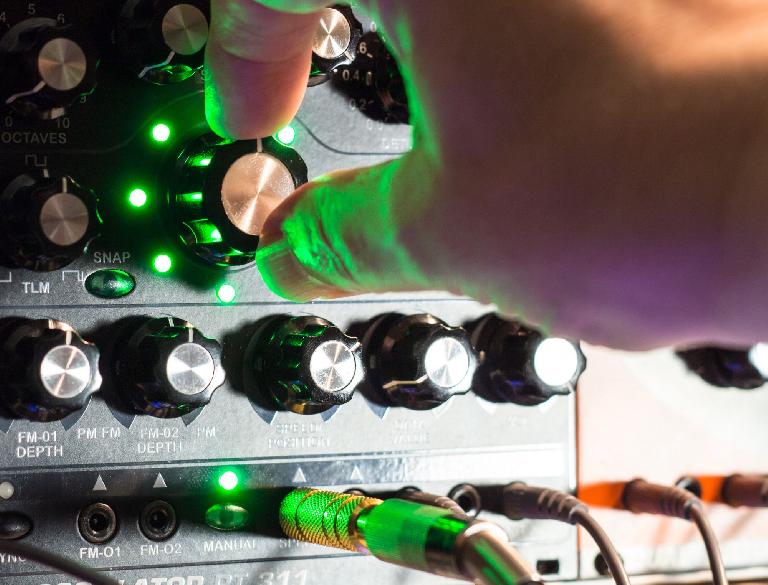 Other operational modes make more radical results really shine through, though. Switching Snapshot-Mode into play permits the RT-311 SWARM OSCILLATOR to store up to eight memory setups, each with eight snapshots, saving all oscillator settings and memorising them even after whatever Eurorack small-format modular synth system is playing host to the module has been powered down!

Such snapshots are assigned to one of eight positions accessible via the ‘big knob’ dominating the RT-311 SWARM OSCILLATOR’s front panel. Put it into Interpolator-Mode and everything (literally) revolves around the cyclic traversal of those snapshots, smoothly crossfading from one to the next with transitions taken care of via voltage control, an internal LFO (Low Frequency Oscillator), or the big knob itself — either way, the surrounding eight LEDs (Light Emitting Diodes) illuminate accordingly in user-chosen colours, helpfully highlighting which snapshot is playing at any given time. 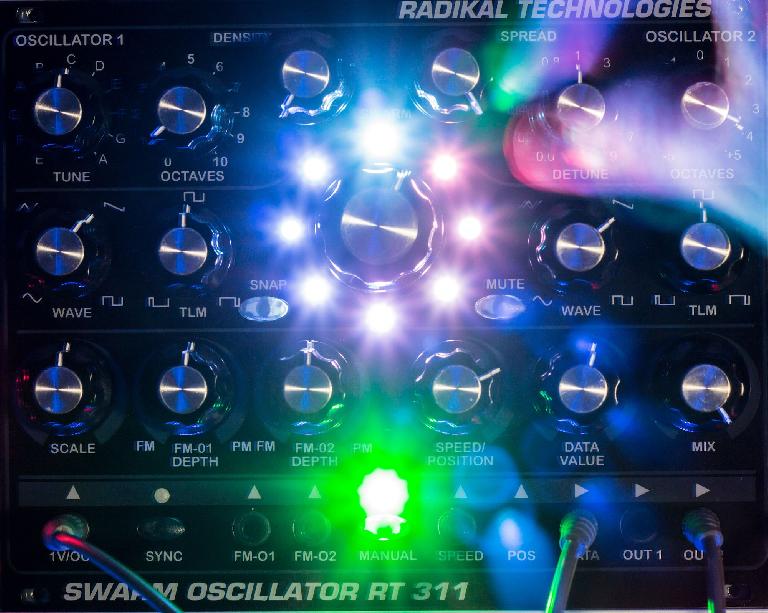 You could reduce the brightness of the RT-311’s colourful LEDs...

To make room for an RT-311 SWARM OSCILLATOR in any Eurorack small-format modular system means making more sound colours available to the sophisticated synthesist... Radikal by name, radical by nature, now a swarm of oscillators need not take up too much valuable rack space, so why not add one (or more) modules to your setup today to start putting Radikal Technologies’ latest DSP-driven design through its unique-sounding paces?

Now shipping, the RT-311 SWARM OSCILLATOR is available for purchase from Radikal Technologies stockists at an MSRP of €598.00 EUR (in Europe) and $659.00 USD (in the US).