Based on the original 1973 hardware unit, Universal Audio's RE-201 Space Echo combines echo/delay and reverb features into a single plug-in. This tape-based classic from Roland has graced countless hit records over the years with its unique analog tone. But hey, what's better than using a single Space Echo on a track? Using two of them of course. Let's take a look at a cool technique shown to me by keyboardist extraordinaire Bruce MacPherson to help add stereo depth and dimension to your productions.

First, create 2 stereo Auxiliary tracks and assign each of them to a RE-201 plug-in. Now, lets dial in a sound.

Since the RE-201 is a Tape Echo and Spring Reverb, the Mode Select knob selects any of the 12 different combinations of reverb or echo sound. To get started, turn the knob to find a combination that works best for your needs. I've found setting 9 (which is reverb and echo) to be my favorite, so we'll pick that for now. 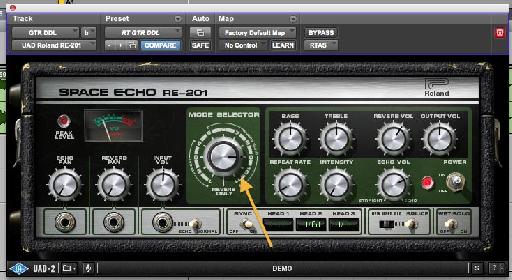 Next, on the bottom right hand side, switch to Wet Solo ON, since we're using it as a bus-based effect on an Auxiliary track. Or, if you're placing it directly on a track as a channel insert, turn the Wet Solo Off. In that setting, the dry signal is mixed with the processed one.

Now, adjust the Echo and Reverb Volume knobs to determine how much of each effect you want in your signal path. Turning them hard left (counter clockwise) takes the effect out, and turning it clockwise brings in more effect. 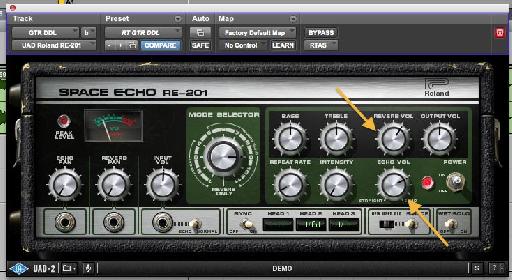 It's time to dial in the interval of echo effect with the Repeat Rate knob. Note that if Tempo Sync is ON (a feature not found on the original hardware), the unit will quantize the echoes to the BPM of the host session. The Intensity knob will dial in the repeat level (feedback) of the echo, and some cool effects can be had by turning that knob up and sending the unit into self-oscillation.

'¨Ok, so now you've got a sound dialed in and you're happy right? Not yet! Try turning the Echo Pan and Reverb Pan knobs to the left side. Then call up the same settings on the second RE-201 plug-in. But this time, turn the Echo and Reverb pans to the opposite side of the first '" the right. 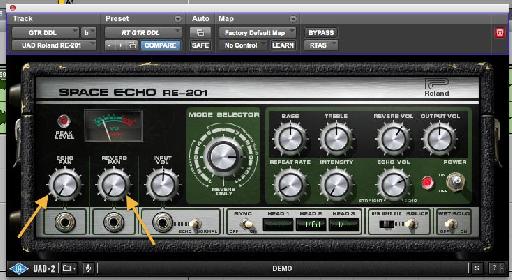 Once you've followed the above steps, you can change the repeat rate of the echo to either a shorter or longer one than your first '˜201. Now you can dial in a super wide stereo echo and reverb sound that can enhance any production. Try it on keyboards, guitars and even vocals. You can't go wrong with a pair of good old Space Echos.

Dream It. Do It.
Do you want to learn Spatial Effects?
Yes, I want to learn!
No Thanks, I just want to read the article.
Feedback
How are we doing?
We'd love your thoughts, feedback and questions regarding our new site. All feedback is appreciated!
We do not respond to this form! If you need support, please visit our support page.
Thank you for your input!
Your message has been successfully sent
Course Advisor
Don't Know Where To Start?
Ask A Course Advisor