Even though so much audio processing nowadays is done inside-the-box—much of it utilizing the plethora of high-quality emulations of classic analog gear—there’s one area where the real thing is still in use: the studio’s analog “front end”. The term front end, of course, refers to the chain of analog hardware processors that microphone (and other) signals are run through before hitting the console/interface and the AD converters that bring them into the digital world. For many smaller studios, this is the one chance for those signals to get a touch of real analog magic, and studio operators often carefully assemble the basic components of a good front end.

But a popular alternative to assembling a chain of separate front end boxes is the analog channel strip, or recording channel. This is a single hardware box that includes all the (basic) front end components—preamp, EQ, and compression—and sometimes even additional stages, like de-essing or gating. These have become popular as an alternative to separates, and there are many available at all price points for the studio operator who wants to take advantage of the option for one-stop shopping for his/her analog front end. Here’s a brief survey of some of these recording channels; to winnow out the many preamp/EQ and preamp/compressor models, I’ll include only units that incorporate (at least) all three of the basic front-end components—preamp, EQ, and compression. 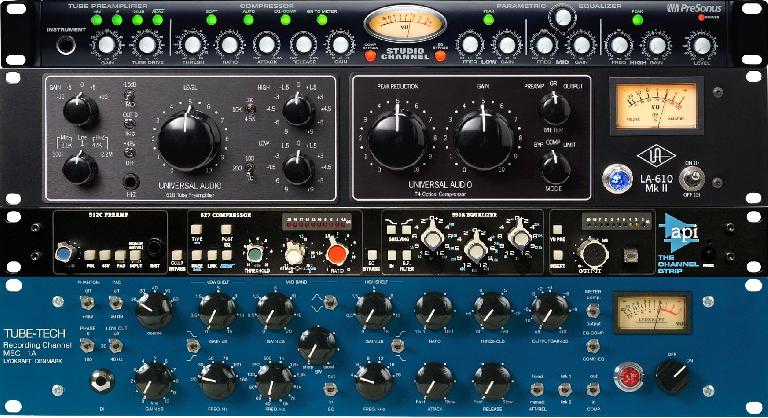 It’s not surprising—given the fact that they combine multiple processors—that the majority of recording channels are fairly pricey, falling in the $1500-$3500 range. However, there are several that come in at a budget price, making them affordable for smaller studio setups and solo operators. These may not offer the kind of high-end design and circuitry that their pricier siblings do, but they still provide good-quality front-end processing in a comprehensive package.

The dbx 286s is a basic recording channel, with a solid preamp and classic Over-Easy™ dbx compressor. I’m including it even though it lacks EQ, because it makes up for that with a number of useful extras. Taking the place of the missing EQ are high and low frequency enhancers for subtle tonal shaping, and there’s a de-esser and an expander/gate, providing all the necessary components for an all-in-one front end.

This channel offers a Class A tube preamp along with its standard VCA compressor and 3-band semi-parametric EQ. While tube preamps at this price range may not provide the same level of detail and warmth as high-end models, at this price point it’s a welcome touch of analog character.

The ART Pro Channel II also includes a tube preamp, and ups the ante with an opto compressor and 4-band semi-parametric EQ. Another nice touch is a variable impedance selector—not common in this price range—which can be used to optimize the preamp for different microphones. The Voice Channel is geared more specifically to vocal recording, adding a de-esser, an option for higher tube voltage (which should provide smoother sound and better headroom), and digital output.

The LA-610 recording channel from UA incorporates some of their classic analog circuits. It includes their 610 tube preamp with variable impedance, and a basic two-band high and low shelving EQ. The compressor is an optical design that uses the same T4 cell as the classic Teletronix LA-2A (also made by UA), a favorite for vocals (as well as other instruments), and a big selling point. At a somewhat higher price point, the company also makes the 6176, which combines the same preamp and EQ section with an 1176-style compressor, for those who’d prefer the more aggressive FET compression of that design.

Like the UA offerings, the ISA430 incorporate some of Focusrite’s classic circuits, including their well-regarded ISA mic preamp, which features a Lundahl transformer for analog warmth. The EQ combines two bands of shelving with two additional fully-parametric bands, and the ISA also adds a full-featured gate and a de-esser. The compressor can be switched between a transparent VCA design and a more colorful optical circuit. The highly flexible feature set is wrapped up with a soft limiter on the output, and an optional digital output card.

API’s Channel Strip is made up of several of their classic console/lunchbox modules. The preamp is the 512c, and the compressor is their 527 model with optional hard/soft knee and their signature “Thrust” feature, which switches in frequency dependent sidechain control for a punchier quality. The EQ section is the three-band semi-parametric 550A—another API classic—known for its proportional-Q design, which offers less interaction between bands for what many describe as more “surgical” EQ.

The RND Portico brings the Neve sound—as implemented in current RND 5088 consoles—to the channel strip format. It includes a Neve-style transformer-based preamp, parametric EQ, and a transparent compressor with a choice of feedforward or feedback operation (for a more modern or vintage response, respectively). A distinctive “Silk” feature selectively adds 2nd- & 3rd-order harmonics, and a Texture controls dials up the desired degree of enhancement. The Shelford Channel combines aspects of various Neve designs past & present, including circuits derived from the classic Neve 1073 preamp & EQ, inductor-based EQ, and a vintage-style diode-bridge compressor that echoes the classic Neve 2254 console compressor, offering the distinctive “character” compression of that vintage design.

The term “cassette” here refers to EMI’s use of that word to describe the console modules for their TG-series consoles. These were the consoles designed and used in Abbey Road studios, from their initial use on the Beatles’ Abbey Road album throughout the 70’s on recordings from Pink Floyd and other classic artists. The solid-state TG consoles replaced the earlier REDD tube designs, and the TG sound is undergoing a resurgence, with software and hardware reissues—including this recording channel from Chandler—created under the auspices of Abbey Road studios. On tap are a preamp, a classic EMI “Tone Bender” EQ section, and an optical compressor with a distinctive response.

The Avalon VT-737 is a modern classic, combining a preamp, opto compressor, and four-band parametric EQ.  The preamp incorporates an input transformer, and the preamp, compressor, and output stages employ tube circuitry, while the EQ is a Class A transistorized design. The compressor’s response rages from soft to hard knee, depending on settings, and—as with many of these units—the processor order of the EQ and compressor sections can be user-selected. I had occasion to use a 737 for many years at a client’s studio, and it always provided the highest quality signal path, whether run cleanly or pushed for a little extra analog character.

Tube-Tech processors also can be described as modern classics—their designs often pay homage to vintage circuits like Pultec EQs and opto-compressors, often with additional controls and features. The MEC 1A combines several of their signature designs—the MP1A preamp, EQ1A (active) EQ, and CL2A opto compressor. It’s an all-tube design, with input & output transformers. The opto compressor provides the classic opto response characteristic, but extends it with user-adjustable attack & release, and optionally faster response times than many vintage opto comps. Having used Tube-Tech gear in my studio (preamp & EQ) I can vouch for the Tube-Tech “sound”: warm & full, but at the same time clear & detailed; I’d expect no less from this recording channel.

While many (most) of the units I’ve included here are known for their analog “character”, Millenia is most commonly associated with the other approach to signal processing—the “straight wire with gain” paradigm, where the circuitry is designed to be as clean and transparent as possible. But while the SST-1 can be run ultra-clean in full accordance with that philosophy, it also includes tube signal paths as well. The SST-1 incorporates Millenia’s Twin-Topology design, which includes alternate solid-state and tube stages for the preamp and EQ sections, and three paths for the opto compressor—solid-state, tube, and passive. There’s also a solid-state/tube de-esser, and an optional input transformer. The flexibility of these options should provide the best of both worlds when it comes to deciding between ultra-clean and “character” processing.

While there’s something to be said for mixing and matching the various components that make up a front end recording chain, recording channels can be an elegant solution, providing well-matched processors, that—in the best cases—don’t surrender any flexibility to the separates approach. Available at all price points, they’re well worth a look when it comes time to assemble the analog side of a modern studio.

Dream It. Do It.
Do you want to learn Advanced Metering?
Yes, I want to learn!
No Thanks, I just want to read the article.
Feedback
How are we doing?
We'd love your thoughts, feedback and questions regarding our new site. All feedback is appreciated!
We do not respond to this form! If you need support, please visit our support page.
Thank you for your input!
Your message has been successfully sent
Course Advisor
Don't Know Where To Start?
Ask A Course Advisor