All Articles Guitar
Mixing Guitars: Layering Acoustics
Rich Tozzoli on Wed, August 27th 0 comments
Language
So you've decided to record some beautiful acoustic guitar parts to go along with your electric sections? Here's some tips from session guitar veteran, Rich Tozzoli, on how to layer them in the mix.

Acoustic guitars are not just for fingerpicking and strumming. In a lot of my TV work, I use them to double the electric guitar parts, which helps to create a crisp clean overall sound. Let's take a look at a few tips to use acoustic guitars in a slightly different way.

If I am going to layer acoustic guitars, I will pan the electric part to one side of the mix, and pan the acoustic to the opposite. This way, you have a full range guitar spectrum covering the stereo field.

Track Them Right Away

When I cut my electric guitar parts I like to record the acoustic ones right away. This way, you remember not only the part overall, but all the little nuances you just played.

If you don't record them right away, you may have to relearn the part. What I will do then is to make notes on the DAW software. This is especially relevant if you are using different tunings or capo. For example, even if I'm not recording the acoustics immediately, I will create channels for them and put in notes like '" Capo on fret 4 '" Drop D tuning. Believe me, you may think you will remember but if it's days later, or a dozen tracks later, you'll forget. Notes have saved my butt many times.

Close but not Exact

I tend to play the acoustic part very close to the electric, so that in the mix you don't notice the acoustic sticking out. So I will basically double the exact part most of the time. However, there are times where I will play an obviously different acoustic track, if I want to deliver an '˜acoustic mix'. It's all a matter of what you're going for in the overall production.

When I'm tracking acoustic guitars for layering purposes, I record both with a mic, and using the guitars internal DI pickup. On my Martin 0-15, I have a Fishman blender pickup installed, which I run through a high-quality DI preamp. I also use a microphone, typically something from Earthworks or DPA, which record clean flat and clear. I will use a blend of both in the mix, as each has a distinct sound.

Acoustic guitar DIs are notoriously midrangey and honky sounding. By themselves, they generally don't sound that great. But with a little bit of work, and when added to a miked up track, they can add a lot. It's best to record the DI with the mic and at least have it to work with.

The key is to treat the DI with some EQ. Since the midrange frequencies are usually the offensive ones, I will tend to cut them down. Since every guitar will be different, you'll need an EQ you can easily adjust. Sweep the mid frequencies around and cut them until you hear that honkiness go away. This would usually be in the 1 kHz range down to around 500 Hz.

With acoustic guitars, especially when doubling electric parts, you generally will not need too much bottom end. It will just get lost and probably even help make the mix muddy. So especially on the DI, you can cut the lows out almost completely, from as high up as 150 Hz. If you do need lows in the acoustic, its best to add them on the mic track, not the DI

I use the acoustic DI track to add some sparkle and lift. I will add some high EQ around 10 kHz and up, which helps with the over all clarity of the guitar. Don't be afraid to push the EQ up very high until it works. Loose that '˜it's not technically right' mentality, and push it until it sounds good. 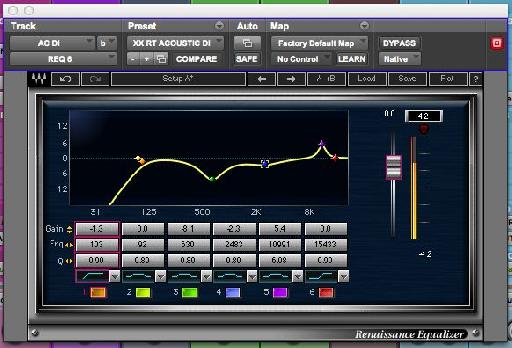 If you use a good mic on an acoustic, you shouldn't need too much EQ to get it to work. Sometimes, I do like to add a bit of 10'"12 kHz for pick attack. Also, like the DI track, I will remove a lot of the low end from 150 Hz and below. This is mostly true when using the acoustic as an electric guitar double, as there will be plenty of low end in the other tracks as it is.

On both the DI and miked up track, I will add some harmonic enhancement with a plug-in such as the Sonnox Inflator. What it does is push up the overall presence and excitement of the acoustic, and I use it in addition to EQ. 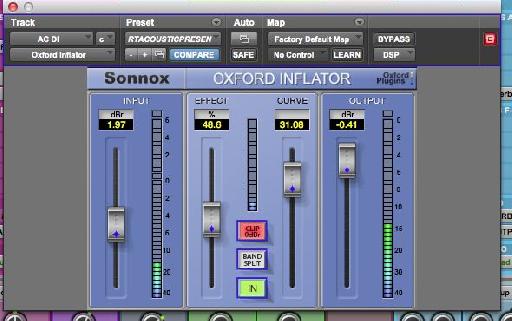 With acoustic guitars in a dense mix, reverb is not always necessary. In fact, sometimes it does get in the way, making things a bit muddy. But also, depending on the track, reverb can work. What I have found to work the best when layering acoustics with electrics is a short, small room sound. I will cut all the low end out of the room and possibly even make it a bit bright. By adding just a little bit, it can give the acoustic a touch of depth. But be careful. If it doesn't work, don't be afraid not to use any at all.

Listen to this mix without acoustic guitars:

and now, with acoustics: