All Articles Review
Review: sE5 Stereo Microphone Pair
Hollin Jones on Tue, August 26th 0 comments
Language
Getting a good matched pair of microphones when recording audio in stereo is crucial. sE Electronics' sE5 provides a solid base from which to start and at a price that won't hurt your wallet.

Stereo recording is something that is useful and even necessary in a variety of situations. Most often it's when you're capturing a physically larger instrument like a piano or a drum kit, or when you want to get a bigger soundstage than a single mono mic can offer. It's usually a good idea to use a matched pair of mics for stereo recording because you want each one to behave the same way so that the character of the sound captured in both channels is broadly the same. You will already be dealing with issues of directionality and phasing, so if you can remove the added complication of two mics inherently sounding different, so much the better.

sE's new 5 model is available as a single unit of course but also as a stereo pair, at a bit of a discount if you buy both. If you do, you get a nice metal carrying case and a stereo bar which makes mounting both mics on a single stand much easier, and angling them relative to one another much more straightforward. You also get two shock mounts for minimizing vibration, or a single shock mount if you just buy the one mic. 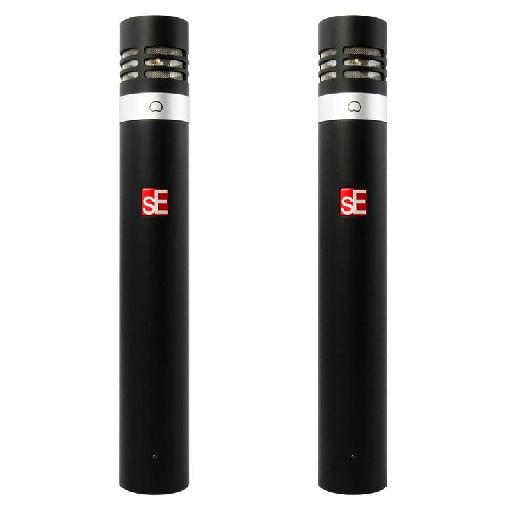 The mic itself is extremely well built and feels solid and professional in your hand. It has two switches onboard, the first of which is a 100 Hz bass cut switch that can be useful for decreasing the proximity effect that can result from placing the mic very close to a source, or to cut out low frequency rumbling from other sources during a live recording. The second is a -10 or -20 dB pad switch that is handy for recording very loud sounds like drums or guitar amps. It has a maximum SPL of 170 dB and requires 48v phantom power, and is a cardioid mic with a frequency range of 20 Hz'"20 kHz. 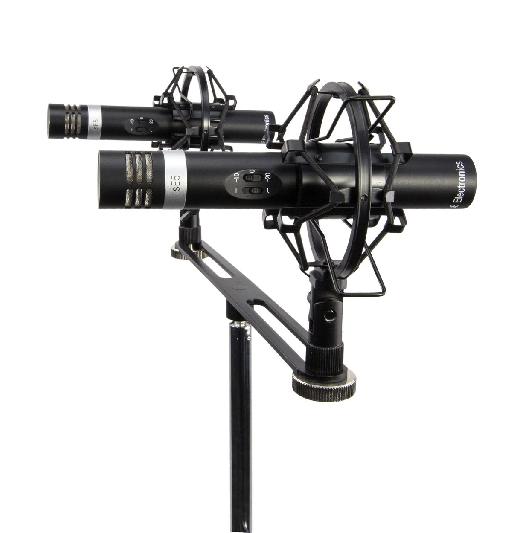 In use, the pair of mics was a pleasure to use on acoustic guitar, really opening up the soundstage and giving a much fuller sound by angling the mics at the sound hole and also down towards the neck past the bridge.

In use, the pair of mics was a pleasure to use on acoustic guitar, really opening up the soundstage and giving a much fuller sound by angling the mics at the sound hole and also down towards the neck past the bridge. By capturing from two mics it was possible to achieve a much more natural sound and pick up a little of the fret noise from the player's hand as it moved around the fretboard. They would also be ideal used as more ambient overhead mics for a drum kit or for angling strategically into an acoustic piano, or even at several string players to capture a natural sound. Using a single mic was equally good and it exhibited a smooth response across the whole frequency range and dealt well with transients in dynamic material.

As a general purpose instrument mic the sE5 is excellent and affordable, and as a pair they make for a good way to explore the creative world of stereo recording without breaking the bank. Factor in the stereo bar and shock mounts and you should have hours of stereo recording fun!