All Articles Logic Pro
10 Logic Pro X Key Commands That Will Rock Your Workflow
Jay Asher on Mon, June 8th 0 comments
Language
You might be a Logic Pro X expert, or you might be a novice. It doesn't matter. These key commands from Jay Asher (there's actually more than 10) can improve your workflow. So check them out now.

I admit it, I have a prejudice. When I see videos or watch guys in person using Logic Pro, no matter how good they are, and they are mousing around all over the monitor to accomplish tasks, I think 'Amateur Hour.' Any task performed with a mouse move rather than a keystroke to me is a waste of effort and an invitation to carpel tunnel syndrome.

This article is not about the ones that the developers consider so vital that they have assigned a single digit key command, so I will dispense with those right away by listing them. All of these open areas of the Main Window rather than the standalone versions of the editors:

Logic Pro X gives you a lot of created key commands for certain tasks but has not assigned others. Also, you may wish to change some of the assignments. Simply pressing Option-K opens the key commands window.

Logic Pro X gives you a lot of ways to zoom in, zoom out, show/hide things in the Track List header and Mixer, open plug-ins either one at a time or multiple, etc. Sooner or later you will want to get back to a default view and will find it difficult if you have not locked the screenset. In Pic 1, you can see that with the default key commands, there is not one assigned to locking/unlocking a screenset as there was in previous versions of Logic Pro. 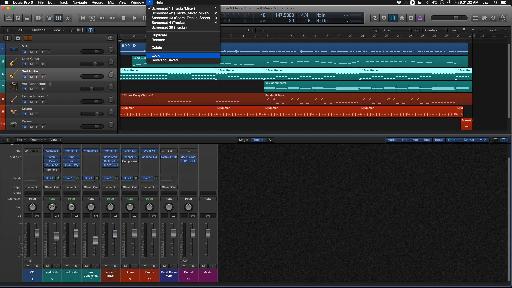 So I need to assign a key command for this important task.

I open the Key Commands window and in the search field, I type screenset. In Pic 2, you can see the one I want and that it is indeed unassigned. 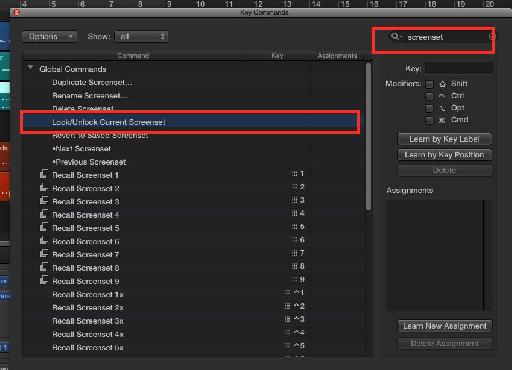 I click learn by key label and after trying some combinations that Logic Pro X tells me are already assigned, I settle on Control-Option-L.

I then uncheck learn by key label, close the Key Commands window and press that combination to toggle the screenset lock on, and as is evidenced by the dot to the left of then screenset number, as you see in Pic 3, Bob's your uncle.

Navigating around your project is a huge part of workflow and grabbing the Playhead and dragging it around is, well, a drag.

Logic Pro has a pre-assigned key command to simply type in your position, either by bars/beats or SMPTE position. It is assigned to the forward slash on the keyboard next to the right Shift key and it opens. See Pic 4 and Pic 5.

If I want to go to e.g. 4 3 1 1 I simply type 4, hit the spacebar, then 3, and hit the Spacebar, etc., click OK and the Playhead moves to that position, Next time I open the Go To Position window it will remember the last position entered.

This used to be called Pickup Clock in previous versions of Logic Pro and it is assigned to the semi-colon. In Pic 6 I have a bunch of regions that I want to move to measure 1 but preserve the timeline relationship.

I press the semi-colon and it is done.

So valuable I probably should have listed it first. Select a region or regions in the Workspace and press Shift-Spacebar.

If I have regions with different transpositions, settings for dynamics, gate time, etc., as I do in Pic 7 this allows me to write them to the MIDI without having to change them.

Simply press Control-N and those setting are preserved but all the numbers of those parameters return to the default values.

This task allows me to take regions on the same track that have different quantization settings and merge them without losing those settings. This is also very important for exporting a standard MIDI file to be used in another

This time I press Control-Q to accomplish this.

Select the regions or events in an editor and press Command-T. 'Nuff said!

#9 Cut Selection Between Locators and Insert Silence at Locators

The developers threw me a little curve when they changed this behavior in Logic Pro X. Pressing Command-R with regions selected used to bring up the dialog box you see in Pic 8. No more. Now pressing that key command repeats them one time and as you can see in Pic 9, there is no default key command for that dialog box to repeat multiple times. 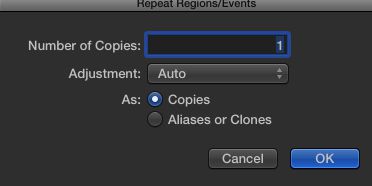 BONUS KEY COMMANDS: Go To Next Marker and Go To Previous Marker

In Pic 10, noticed I have created some markers, which is a great way to navigate through your project. There are no default key commands for these but I use them so often I have assigned them to my F5 and F6 keys respectively.