All Articles Logic Pro
10 Reasons To Upgrade From GarageBand To Logic Pro X
Jay Asher on Tue, November 21st 3 comments
GarageBand shares a lot of its DNA with Logic, but the bigger app has a ton of features that GarageBand lacks. Here are 10 reasons to make the leap.

In 2002, Apple bought it and Steve Jobs tasked Dr. Gerhard Lengeling and his Logic development from Emagic with making it more user friendly and also with creating an entry level version, with the result being GarageBand, announced in in 2004. (PC development was unsurprisingly discontinued.) In those days, the two programs did not look much alike or necessarily behave all that similarly, but over time they have become far more obviously related.

Here is a new GarageBand project with one software instrument. 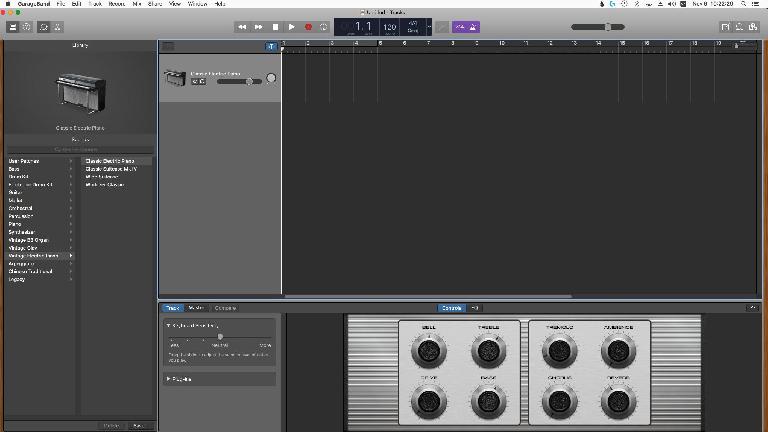 Here is a new Logic Pro X project with one software instrument when the Advanced Tools are unchecked. 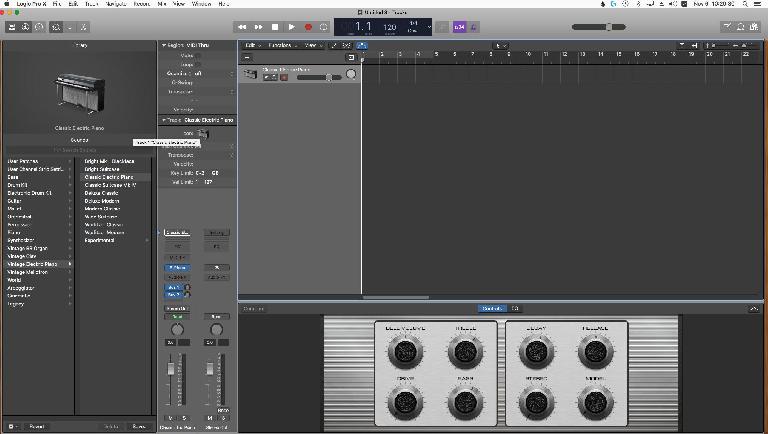 A picture speaks a thousand words, no? With the Advanced Tools turned off, Logic essentially is GarageBand. So if you are a GarageBand user (and most new Logic Pro X users do begin with GarageBand) why bother transitioning to Logic Pro X? There are a lot of reasons. Here are ten of the most compelling.

In a GarageBand project like this I see volume sliders on each track and pan knobs but if you want a full fledged mixer, sorry, you do not have one. 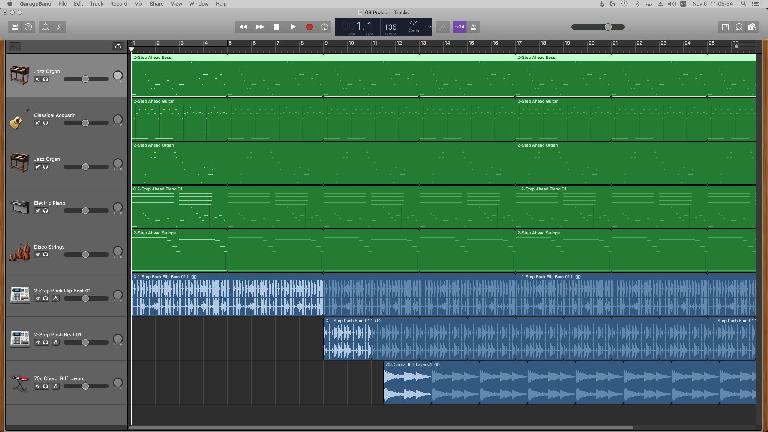 In Logic Pro X you do, available as part of the Main Window, toggled on/off with the key command X, or as a standalone window. 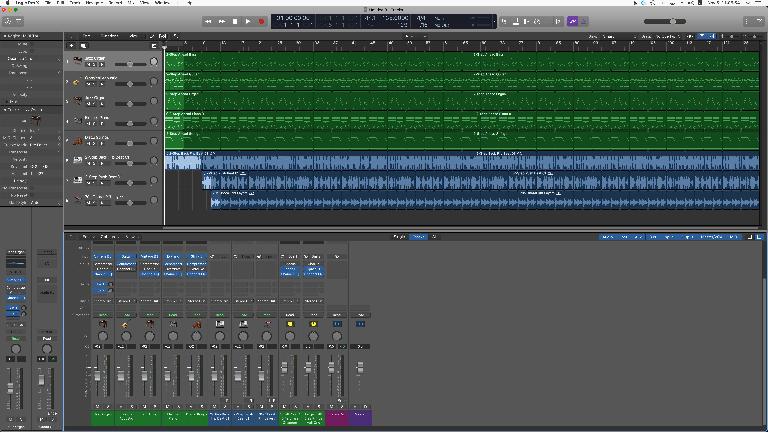 Which means when you are mixing on the fly and making adjustments in real time, it is far easier. It is also enables you to add the same plug-in to multiple channel strips and easily copy plug-ins from one channel strip to another. While GarageBand users obviously manage to mix music without a full featured mixer window, I can’t imagine mixing a project without one.

Logic Pro has an Inspector that you can easily toggle on/off with the key command I, for each track which allows you to control things that affect regions, channel strips, plug-ins, and what comes next in the signal flow (in this picture the stereo output) or sends if they are instantiated as well as add, remove and alter plug-ins far more easily than GarageBand. 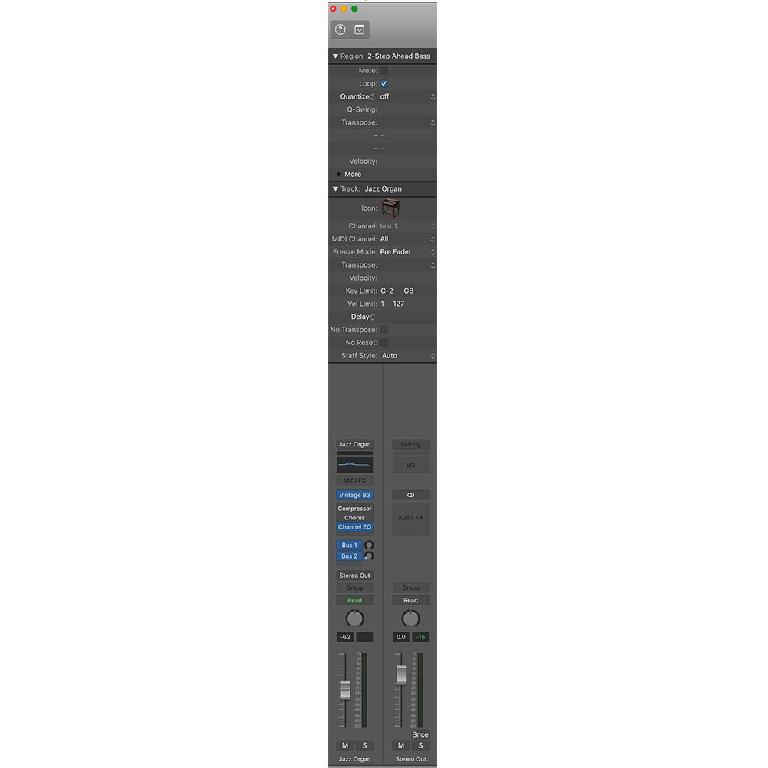 These simply do not exist in GarageBand as they do in Logic Pro X, so if you want to e.g. send a bunch of tracks to the same reverb, it is not doable in a console workflow emulation. 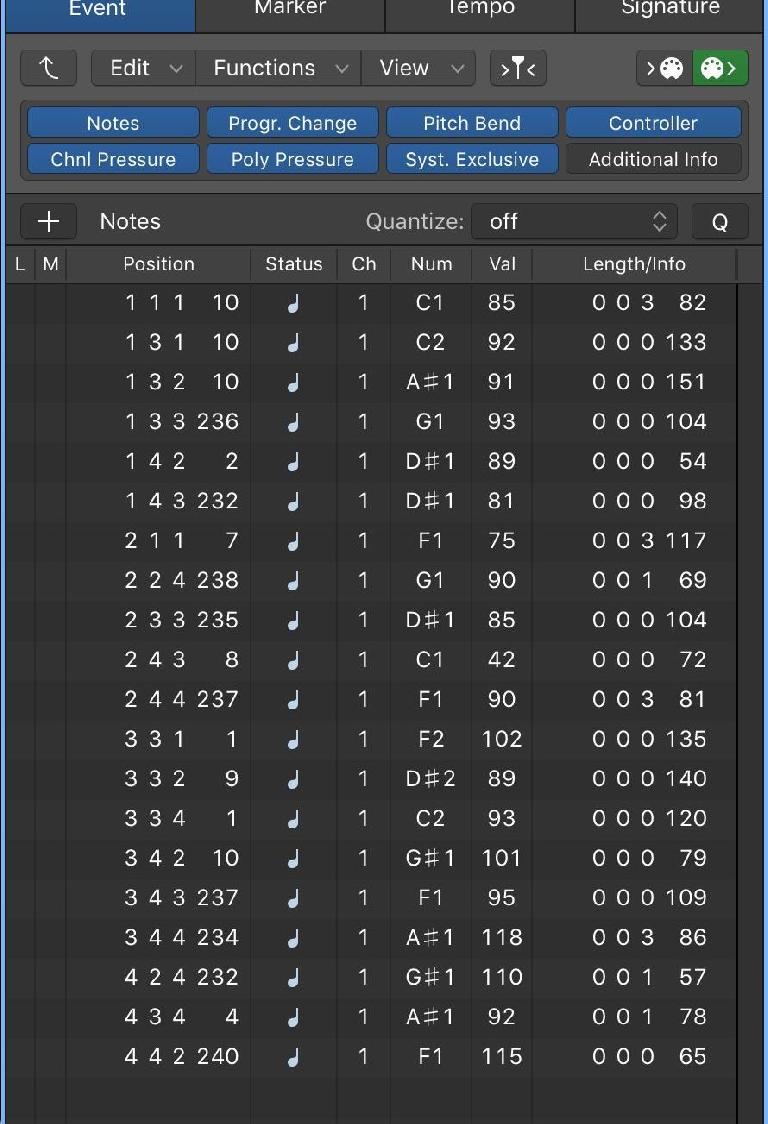 Whether alone or in tandem with the Piano Roll or Score Editor, the Event List shows you details down to the tick level, which is invaluable. It is personally my most relied-on MIDI editor.

The key to efficient workflow in either GarageBand or Logic Pro is using key commands for shortcuts. In Logic Pro, almost everything can be done with a key command and with the exception of a few that are “hard wired”, you can create your own. GarageBand also has a great number of them but you are stuck with the ones they give you.

Logic gives you two kinds of Track Stacks: Summing Stacks for creating layered and split patches that you can save in the Library and Folder Stacks for simple track organization. Both incredibly useful, both do not exist in GarageBand.

Go into cycle mode and keep singing or playing your part and you can see all your passes in a Take Folder. You can then simply drag over the sections of each take you like for a comp that you can leave as is, flatten, which lays out the regions for editing, adding further fades, or flatten and merge to create a new audio file. A great way to record audio that again, simply is not available in GarageBand. 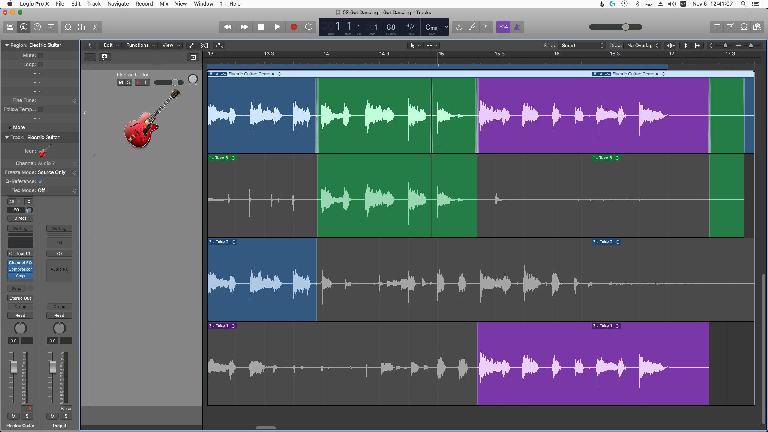 You can easily open fantastic arpeggiated parts ranging form the most simple or complex or create your own with all kinds of sounds. Great, great tool, only in Logic Pro.

While both Logic Pro and GarageBand have the Drummer instrument to help you create great drum parts quickly without requiring much knowledge about what the real guys play, Drum Kit Designer allows you choose between a ton of individual kit pieces to create your own drum kits.

Quite simply this is the best way to navigate through a project. While both Logic Pro and GarageBand have Arrangement Markers for use with Drummer, only Logic has Markers for navigation that you can name, color, and use key commands to go from one to another or to a specific marker. 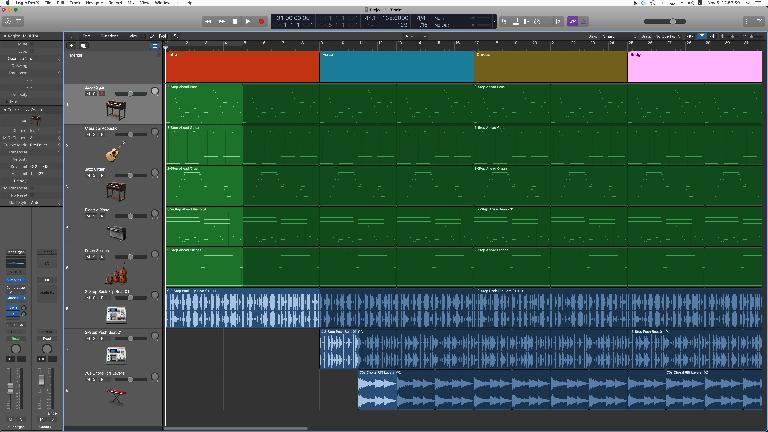 These are only ten examples and there are many, many more. That said, please do not think that I am dumping on GarageBand. It is a remarkable program and I have heard terrific music created with it, and it is free. And given the similarities, It is not a coincidence that most new Logic Pro X users come from GarageBand.  But it is the difference between a basic tool that is suitable for hobbyists who do not have deadlines to meet, and a full featured program that busy professionals with deadlines and hobbyists who want to up their game can enjoy creating music with. The learning curve from GarageBand is no longer nearly as steep and at $199, Logic Pro X is an incredible bargain. And you can start projects in GarageBand on the Mac or IOS devices and then work on them in Logic Pro X.

If you are a GarageBand user who is serious about creating music, this is a transition worth making.

Learn everything you could dream to know about Logic Pro X in the Ask.Audio Academy here: https://ask.audio/academy?nleloc=application/logic
Related