All Articles Audio Software
5 Tips For iZotope Stutter Edit
Mo Volans on Fri, May 4th 1 comments
Language
There's no doubt that iZotope's Stutter Edit is the go-to plug-in for glitch effects, both in the studio and when playing live. Here are 5 tips by Mo Volans to make Stutter Edit positively purr!

iZotope's Stutter Edit is one impressive bit of kit. There have been buffer / glitch based plug-ins in the past but none have quite nailed it like Stutter Edit. If you are interested in getting into this edgy effect here are a few tips that'll make sure you hit the ground running.

One of the main thing that trips people up when using Stutter Edit is the initial routing and set up. Even though there is a pop up that explains this it still seems to be a stumbling block for many.

I think the mains reason for this is that Stutter Edit works in a different way to most plug-ins. In most DAWs (Logic 9 for example) you'll need to load Stutter Edit as a MIDI controlled instrument as opposed to a straight up insert effect. 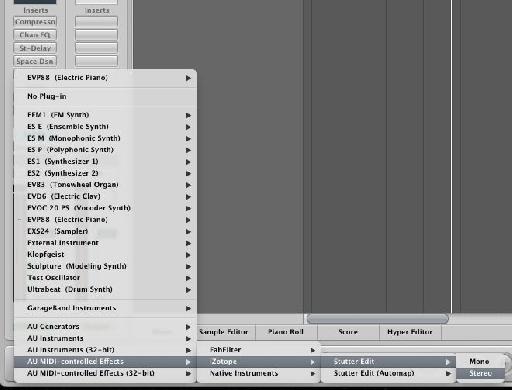 The signal that you want to process is then fed into Stutter Edit as a side chain. You can then control Stutter Edits output with your keyboard and the original audio's output can be muted. Get your head around this simple concept and you should be able to set up the plug-in in any App.

Routing audio in to stutter edit as a side chain input.

Stutter Edit can control plenty of parameters in realtime, which is ideal for performance and remixing on the fly. A couple of key controllers that are hard wired in Stutter Edit are the pitch and mod wheels.

The Mod wheels controls the '˜time line' position. A core feature of Stutter Edit is the fact it morphs continuously between two parameters in each of its internal processors. This is usually a timed effect controlled by something called a gesture.

The mod wheel will actually override this internal automation and allow you to decide the exact position of the buffers and timeline whenever you feel the need. As soon as you stop tweaking the timed movement of your timelines will continue where it left off.

The Pitch wheel also gets in on the action here as it is hardwired to a multimode filter. An upward sweep of the wheel gives you a high pass, while a downward motion results in low pass filtering. Both of these are pretty resonant and acidic.

The Global Filter can be controlled nicely with the pitch wheel.

By default the motion of Stutter Edit's timelines goes from start to end in a looping fashion. If you would prefer to create something a little more hypnotic in nature then you can switch to something called Palindrome looping. 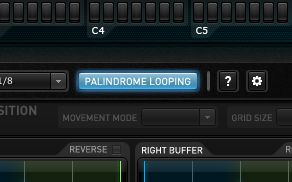 The Palindrome looping button is an essential parameter.

This is activated by using a large button at the top of the plug-in's interface and causes the various timelines to loop forwards then backwards ... And on and on! This creates a very cool, almost seamless, effect and is a fresh alternative to the default looping mode.

Below the timeline in each processor you will see a secondary slider. At each end of this slider there are small icons representing a convex and a concave wave shape. These control the speed and nature of the transition between the start and end of each timeline.

When in the centre the fades are both totally linear.

You can adjust the speed at the start and end of the time lines movement. If you want a truly linear curve you should leave this right in the centre.

One of the great things about Stutter Edit is the fact the timing can be set so that it's almost bullet proof (or fool proof, depending on which way you look at it). This means you can set your quantize grid and never worry about your stutters and buffer effects being out of time with the rest of the mix. Perfect if you are a DJ or performing live.

However, sometimes you may let go of the key a little early or late. This could result in the dry audio coming in at the wrong time and therefore may not be quite as tight as you'd like it to be.

Quantized release will give you even tighter transitions.

By setting the '˜Release Mode' to '˜On Grid' everything will be kept perfectly locked and you don't need to worry about embarrassing slip ups again. The crowd goes wild etc.

Dream It. Do It.
Do you want to learn Stutter Edit: Explored?
Yes, I want to learn!
No Thanks, I just want to read the article.
Feedback
How are we doing?
We'd love your thoughts, feedback and questions regarding our new site. All feedback is appreciated!
We do not respond to this form! If you need support, please visit our support page.
Thank you for your input!
Your message has been successfully sent
Course Advisor
Don't Know Where To Start?
Ask A Course Advisor