All Articles Mixing & Mastering
8 Pro Mixing Tips: Processing the Master Fader
Rich Tozzoli on Fri, May 9th 0 comments
Language
Chances are, you're using a Master Fader on your DAW to control the overall mix. If you do, there are a few tips and tricks that can help make the sound leap out of the speakers.

While everyone wants to make their mix louder, it's important not to push it to the point of distortion. Loud mixes can be nice, but I've heard far too many that actually sound like crap because someone put too much procession on the master fader. Be careful not to overdo it to the point where the music sounds compressed, crunched and unnatural. When applying processing on the Master Fader, go easy at first. You can always push it later after you've dialed in the various plug-ins first.

The variety of plug-ins you choose to apply to the Master Fader depends on what you want to get out of the final product. Do you want it to be just a bit louder? Try a limiter. Does it need some crispness on the top? Call up a good EQ. How about something to '˜glue' everything together? A nice buss compressor can help. Is it too dry overall? Go for a little reverb (but be careful applying master reverb!). '¨'¨I tend to have a go-to selection of plug-ins for the Master Fader that I import in to just about every session I do. That way, they are ready to go when called upon, and I can tweak the mix with tools I'm quite familiar with. Here are a few Master Fader choices that make it onto just about every mix I do.

'¨One of my favorite Limiting tools is the Sonnox Oxford Limiter. I'll apply it as the last insert on my Master Fader, and by pushing up just a few faders, it gives me both punch and clarity. 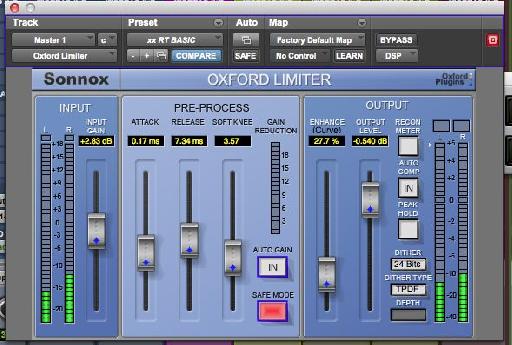 The Input Gain allows you to add up to +18 dB of gain to the overall mix. I'll always pull down the Output Level Fader to just below 0 dB, so that it doesn't clip. My favorite tool on the Oxford Limiter is the Enhance fader. By pushing it up just a bit above 20%, it adds a harmonic enhancement to the mix that is best described as '˜air'. You can push it up even to 125% without it being offensive, but with this'"just a dab will do you right.

For Master Buss EQ, I turn to the Brainworx bx_digital V2. There are a few cool features that make it special for buss use. First, it offers the ability to separately EQ the sides and middle of your mix (called M/S processing). On the left is the Mono section, where you work on the middle of the mix. This lets you work on tweaking the area of the vocal, bass, kick and snare. It offers five tweakable bands from 20 Hz to 22 kHz. I'll typically push up a touch of bass (around 100 Hz and cut some frequencies below 10kHz (for a smooth sound).  Remember, this is only affecting the middle of the mix. 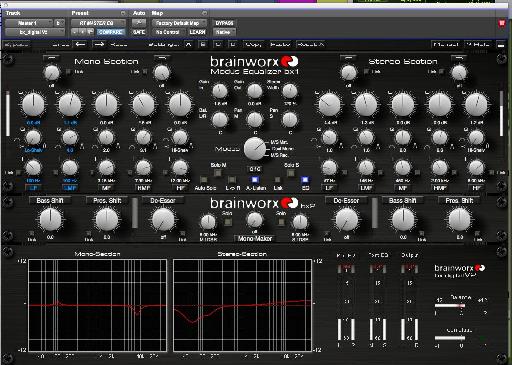 Next, the Stereo section offers the same 5 bands from 20 Hz up to 22 kHz. But this lets you affect only the harder left and right portions of the mix, where things like guitars, overheads, reverbs and effects usually reside. There, I'll usually pull down some of the low-end information, which helps clean up the mix. I may also boost up some of the highs from 6 kHz up to add a touch of air. It's all done on an individual basis, but these are my starting points.

Finally, I'll also add in a touch of Stereo Width, which helps widen the overall image a bit without sounding overly processed or fake.

One of my favorite compressors is the UAD 4K Buss Compressor, based on the classic SSL 4K model. There's something about how this can help all the various instruments become one in a mix, and it adds punch as well. I adjust the Threshold so the needle only moves at loudest peaks (avoiding overcompression). I'll typically leave the Ratio at a simple 4:1 setting, and the attack somewhere in the middle at 1 or 3 ms. Release is set to Auto and I just about 4 dBs of Make Up gain. That's it'"simple and effective. 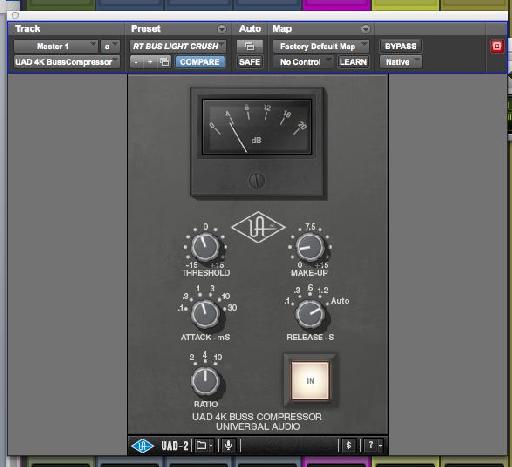 Another tool I sometimes turn to, especially on rock tracks, is UAD's Shadow Hills Mastering Compressor. This monster features two separate stages of compression, and the choice over such things as Nickel, Iron or Steel transformers. I use a touch of each stage, Optical and Discrete compression, to create a hybrid compression blend that can make heavy tracks really scream. 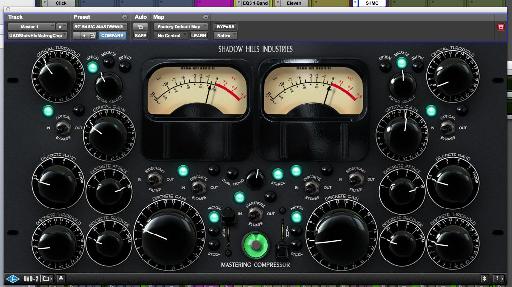 Some products, such as Ozone 5 from iZotope, offer a complete mastering system in one plug in. Ozone is great because it features a variety of tools to get what you need'"EQ, Multiband Dynamics, Maximizer, Multiband Stereo Imaging and Harmonic Exciter, Post EQ, Reverb and Dithering. I like to use Ozone 5 on my laptop sessions because it's no fuss!

The good thing about products like Ozone is that the processing modules are all there for you in one plug-in interface. So you can simply click on the various tools and tweak away. If you don't feel like individually tweaking each element, there are some useful presets that can help you polish up the mix.

If you're not going to have your final product mastered by someone, then it's probably safe leaving the processing on when you print. Not to sound like a broken record, but make sure not to overdo the processing and try to go for as natural a sound as possible.

'¨If you are going to have someone master the tracks, make sure to create a print with no Master Fader processing. This lets your mastering engineer have plenty of sonic space to do the thing they do best. If the mix is edgy and crunched to begin with, there's nowhere for them to go. It may sound a little weak without the master processing on, but that's the mastering engineers job to make it crank.

If there are certain effects that I like on a master, I will make a mix with and mix without processing and just let them hear both. They can then have some idea of just what it is that my ear is going for, and can then use their tools for that sound. Usually, the high end gear mastering engineers have are better than those on my Master Buss, so the mixes come out great. But that's not to say you can't do a good job on your own! Just do it with taste so that years down the line, you can proudly listen and say'"hey, I did that!