While a good, quiet area to record your vocals is always quite necessary, a lot of people forget that is only just the beginning for making vocals sound good! What's so ironic is that the main reason people want the driest vocals possible is so that they can put effects on the vocals to make them wet!

And, why is that, anyway? What is the reason that people feel the need to put these echoes, and ambience on their voices? Ironically, again... They don't want it to sound like they recorded their vocals in a studio, or a closet!

No, seriously, producers and artists want to pull you in to music that takes you somewhere else. They want to paint a picture in words, sounds, and really draw you in to their environment. Creating an environment is more than just adding in piano, guitar, drums, etc. It's about placing those instruments within the kind of room that we'd want to imagine the artist in, not some sterile studio.

We want the country singer to sound like he's in some old, country bar with his old guitar, and his dirty, ol' band behind him running through the old PA system. The walls are wooden, as well as the floor. Producers are aware of this need from listeners. With this in mind, they try to create an environment through effects that makes the dirty, ol' band and their lead man sound like they are in that bar... But, without the feedback, whistling and drunks wandering around.

In your own recordings, even though you have been recording the right way, you may have noticed that your vocals just seem plain and boring. With this in mind, let's examine reverb in GarageBand, and how a little reverb can make you sound like you aren't in your closet anymore!

With this in mind, I generally recommend shelving some of the low end off of my voice (less as much for female vocalists because their voices don't tend to go so low) to free up room for drums and instruments.

Here are my vocals before and after. Notice the extra space!

I used the Visual EQ in GarageBand under the Edit page to shelve off small amounts of low end to free up some room for my vocals. 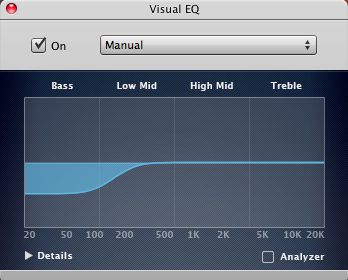 Step 2 - Add Some Dimension Through Reverb

Okay, now I'll click on one of the empty slots in the edit page and select Track Reverb. 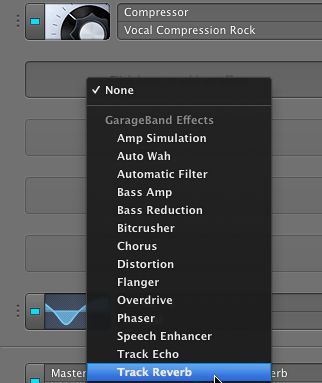 Now, GarageBand comes with quite a few presets for reverb, and if you're new to '˜the verb', I'd highly recommend playing with the presets first, as they do generally emulate what they are labeled as.

However, within this page of reverb settings, make sure and play with the Reverb Volume Slider. 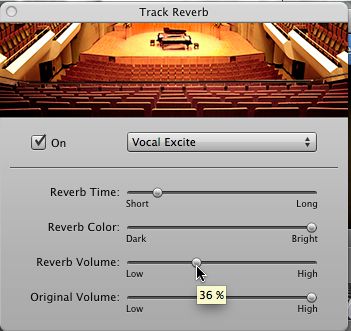 I would recommend tampering with this, as it increases how much reverb is on, or off your voice. You may decide you want more or less. But, keep in mind, you don't want this much...

It's better to go with subtle. Remember, toilets also provide reverb if you stick your head in one as well, as they are ceramic. But, just because you can do it, doesn't mean you should, or that it will sound good.

I'll go with the Vocal Excite preset because it's shorter, meaning that there's no long decay on the end. It's also brighter, due to the slider, which means that the higher frequencies of my voice are being accentuated and slightly reverberated. This gives that good airy feeling. Above all, this setting demonstrates how the reverb is pretty low in the mix, but just enough. 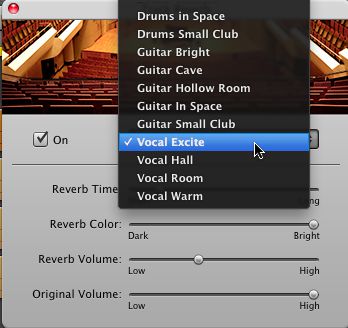 See, there is obviously reverb there, but it's just enough to separate the vocals from the rest of the music, and give you the impression that I'm singing in a cool, open room, and not a closet.

It's really that simple! Remember, you don't need much, only just a hint! This takes you out of boring, dry, and muffled, and gives you open, airy and... working. Keep in mind, your music, style, etc. may call for more, or possibly less reverb. For example: If you're doing rap, and you have tons of words going in 16th notes, you may want to have none!