I guess we're all pretty familiar with the new compressor/mangler Pulverizer now in Reason 6. This is a welcome addition to Reason for me as I'm quite partial to mangling drum sounds and well, anything else really!

Although it may seem a bit strange to animate/automate a compressor the technique has been around for years in the form of side-chaining. This uses the signal of one piece of audio to control the amount of compression on another. In this article though, I'm going to do this using the Matrix Pattern Sequencer to control the amount of Squash on a loop.

So here you can see I have a Dr.Rex loop player. This is loaded with a loop from Reason's Factory Soundbank. I have a bandpass filter across it just to give it a bit of sonic character. The basic loop sounds like this:

Inside the Pulverizer I've just added a bit of Dirt to grunge it up a bit. The Squash setting is at zero (we'll come to this in a bit) and the Filter section is bypassed. Here is the loop now:

So now we get to the fun part. Go ahead and create a Matrix sequencer by going to Create > Other > Matrix Pattern Sequencer. Hit Tab to show the rack cabling and wire the Gate CV into the Squash CV Modulation Input. Using the Gate sequencer on the Matrix module we can drive the amount of squash on our loop to create some nice dynamic effects.

Here you can see I've programmed a sequence in the bottom row on the Matrix. The resolution is set to 16th notes. Because the gate also contains velocity information you can control just how much squash you want by adjusting the values in the Gate row. Here's an example of the effect on my loop: You can also tweak the overall amount of effect sent by the Matrix by adjusting the CV input level on the Pulverizer to taste. 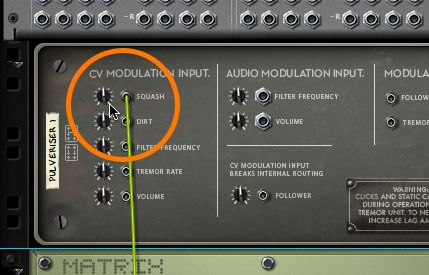 You'll find you can get some really nice pumping effects on drums and other musical loops using this technique. The Matrix also has two other parameters available, Note and Curve. These can also be used to drive other parameters on the Pulverizer as well at the same time, say the Filter cutoff being modulated by the Curve. This also works really well using the Dirt amount.

The nice thing about the Matrix sequencer is that it has 32 available patterns that can be sequenced on a track allowing for many different variations through out a track.