All Articles News
Audified SpeakUp Plugins Streamline Voice Over Production With Auto-Ducking Feaures
Rounik Sethi on Mon, May 28th 0 comments
The new SpeakUp series of plugins from Audified are designed to auto-duck quickly and effectively so the spoken word is always intelligble above the levels of background music and sounds.

BRNO, CZECH REPUBLIC: host application and audio effects developer Audified is proud to announce availability of SpeakUp — streamlining and simplifying the process of voiceover and YouTube show creation by bundling two responsive, purpose-built plug-ins, SpeakUp Sensor (for working with voice tracks) and SpeakUp Performer (for working with video/audio tracks), to automatically and effectively handle ducking such that the spoken word adjusts music volume with carefully controlled fading in and out while also improving speech intelligibility as the background music analyses the speech spectra and attenuates any corresponding spectra within the music track to easily enable smooth blending of voiceover and music — as of May 28…

SpeakUp can be seen and heard in this informative introductory video here:

SpeakUp sprang from Audified acknowledging the need to streamline and simplify the process of voiceover and YouTube show creation. SpeakUp succeeds in doing just that by bundling two responsive, purpose-built plug-ins — SpeakUp Sensor and SpeakUp Performer — with user-friendly controls to free up users to focus on the creative job at hand rather than getting bogged down with time-consuming technicalities. After all, voiceover projects typically take a long time to professionally prepare.

Meanwhile, mastering the multitasking skillset demanded during manual voiceover productions — perfectly adjusting music and advertising volume levels while hosting a radio talkshow, for instance, is far from simplicity itself. If only an easy-to-use tool to allow those radio talkshow hosts to likewise free themselves from those technical stresses and strains was actually available. Actually, it is… SpeakUp succeeds in doing that, too.

SpeakUp’s streamlining and simplifying success is down to its core attribute: automatically and effectively handling ducking — a technique for allowing a narrator’s voice to be heard clearly and consistently when there is other audio happening at the same time, such as background music. In principal, it is simple (but in practice, not necessarily so). Say some music is to be used in either a voiceover or video project that will have a narrator, and that this music will play at the same time as when the narrator is speaking, then the voice should take over as the main audio while the music effectively takes a backseat — background music, in other words. When the narrator is not speaking, however, the music should then be both clear and present — the main thing to listen to, in other words. Which is exactly where SpeakUp comes into play… by bundling those two responsive, purpose-built plug-ins. Putting them into action is straightforward (though there can be several instances of SpeakUp Sensor and SpeakUp Performer inserted in a project simultaneously). 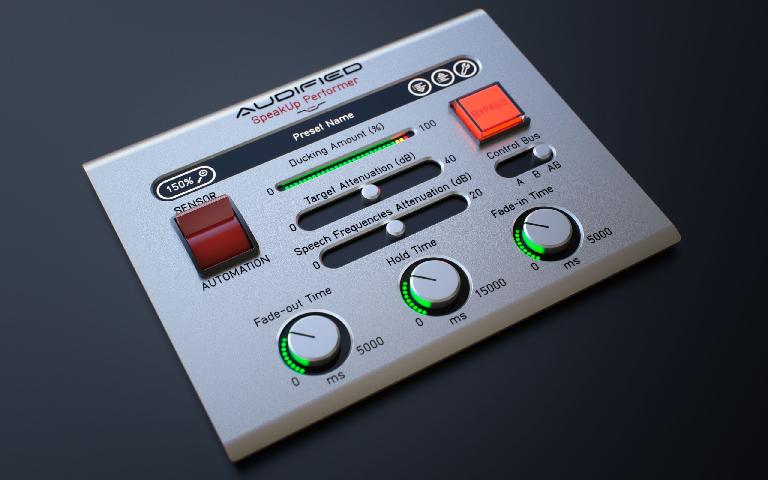 SpeakUp Sensor should be inserted at the end of the voice track effect chain, whereupon it analyses the track and switches the reduction/filtering process, offering just the right amount of adjustment via several straightforward controls. These include: Sensitivity, which sets the speech detection threshold value — by between -60 to 0 dB; Lookahead, which can be used to delay the original speech track — by between 0 to 300 ms — so that after rendering the project the ducked audio track appears to fade before the speech starts; Control Bus, which allows for more sophisticated scenarios via two independent control busses; and FORCE TALK, which allows the speaker to be heard immediately regardless of whether the Sensitivity threshold has been reached or not (so users can manually handle voiceovers by pushing the onscreen button). SpeakUp Sensor also allows for frequency analysis, actively sharing information with SpeakUp Performer so that filtering is customised in accordance with the speaking voice concerned.

Conversely, SpeakUp Performer should be inserted on the video/audio track, whereupon — when switched into SENSOR mode — it ‘listens’ to the information received from SpeakUp Sensor in order to reduce the volume and process frequency filtering. Fortunately, making manual adjustments is similarly straightforward, thanks to another suitable selection of creative controls: Ducking Amount, which defines the currently applied amount — 0 to 100% — of desired attenuation (representing the rate of required action to be done in SpeakUp Performer); Fade-out Time, which sets the transition time to between 0 to 100% of the Ducking Amount (affecting the speed of the fade-out process after speech is detected in the SpeakUp Sensor plug-in); Fade-in Time, which sets the transition time to between 100 to 0% of the Ducking Amount (affecting how long it takes the signal to return back to its original level); Hold Time (between 0 to 15000 ms after the last signal is sourced from any SpeakUp Sensor plug-in), which keeps the Ducking Amount value at 100%; Target Attenuation, which sets the target attenuation applied to the music track when the Ducking Amount is 100%; Speech Frequencies Attenuation, which sets the attenuation of speech filtering applied to the music track to enhance intelligibility of the voiceover — not so much reducing the music level, but rather reducing only the part of the spectrum where the speech should not be masked; and Control Bus, which sets SpeakUp Performer to ‘listen’ to SpeakUp Sensor on up to two independent control busses. 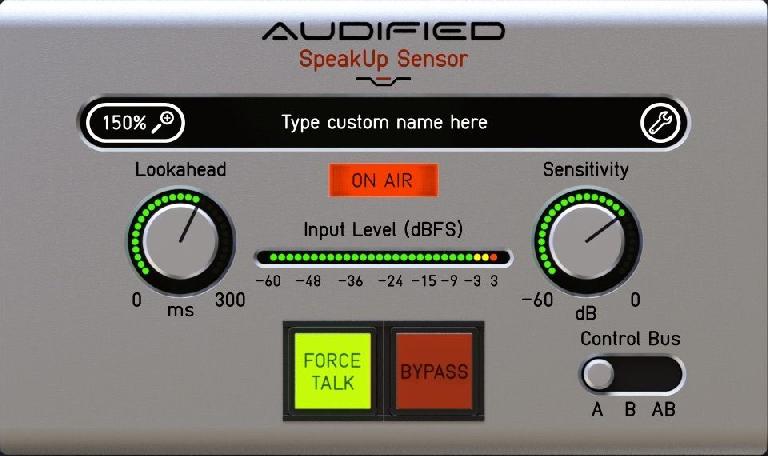 However, having written the Ducking Amount parameter automation curve directly to the host DAW (Digital Audio Workstation) in SENSOR mode, switching SpeakUp Performer into AUTOMATION mode means that it is only controlled by the Ducking Amount parameter automation value read from the DAW with SpeakUp Sensor signals having no effect on processing proceedings. Simply speaking, SpeakUp Performer automatically does its magic!

Thanks, then, to Audified’s achievement, adjusting spoken word volume in a video production need not be the time-consuming process it once was — just add music… and SpeakUp!

SpeakUp is available to purchase at an introductory promo price of $99.00 USD until June 31, 2018 — rising to $139.00 USD thereafter — from Audified’s online shop here: https://shop.audified.com/products/speakup (Note SpeakUp requires iLok License Manager 3.1.6 or newer as it is protected by PACE Anti-Piracy Inc.’s software machine license or USB smart key device, details of which are highlighted here: https://shop.audified.com/pages/how-to-activate-ilok-license)

SpeakUp can be directly downloaded as a multi-format (AAX, AU, VST2, VST3), 32- and 64-bit native plug-in bundle for MacOS (10.9 and above) and Windows (7, 8, and 10) — alongside a fully-functional, 30-day trial version — from Audified here: https://services.audified.com/download