The first plug-in we'll look at is Waves C6, then onto Brainworx DynEQ, then onto a new and simple effect by WavesFactory called TrackSpacer. 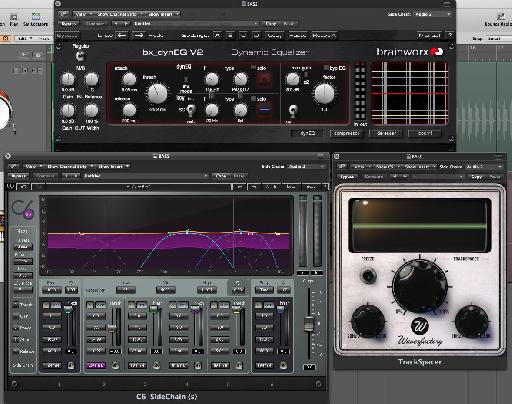 So most of us know how to sidechain a kick to a bass to get that classic dance pumping sound, but what about using the kick to duck the bass by a specified frequency? Or, reversing the actual frequency the kick takes up onto your bass, instead of just volume? For example, instead of lowering the bass volume overall when you feed a kick signal through a compressor, the kick frequencies can actually invert those same frequencies on your bass sound, or you can specify a frequency range to reduce. This technique, is called frequency ducking. I'll be using a kick and bass that are intentionally uncomplimentary.

Step 1: Listen to the un-effected original

Here's a sample of how they sound together without frequency ducking. Put your headphones on, or listen on your studio monitors. This lesson I'd consider 'deep listening,' so the examples might not be as obvious to some. Use this original unprocessed example as a reference. Go back and forth between this, and the processed examples:

Listen closely to the kick... it never seems to hit exactly the same way, this is because both the kick and bass are competing for the same frequency space. Also, it sounds messy, phased and slightly distorted, like someone left an empty glass vibrating on the speaker! This may be desirable in some ways, but not in dance music. You want that kick to punch through precisely every time.

Let's first take a look at Waves C6. If you own own C6, you may have noticed there are two version of it. The Regular C6, and the C6 Side Chain. The Side Chain version is the one you want. I'm going to place the Waves C6 SC onto my bass line sound. From its Side Chain drop-down menu, I'll select my kick sound. Look at the bottom of each band, there's a drop-down menu where you can select whether C6 SC's bands respond to the direct signal, or to the Side Chain source. Choose 'external' on band 2. Since C6 SC separates its 6 bands across the entire frequency spectrum, by doing this you'll only be lowering the volume of the bass sound from 16 Hz to 92 kHz (C6 SC's default value for band 2). Adjust the band's Threshold (the slider), and the Range (Ratio) setting. When you get the 'bounce' you want, adjusting the Range/Ratio will deepen the effect by lowering the volume more. 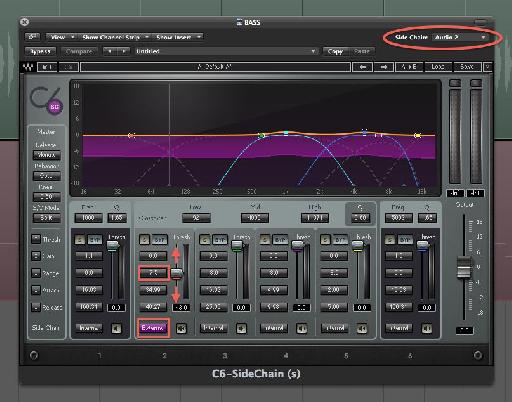 This is how that same kick/bass combo sounds with C6 SC:

Listen to how much better that sounds. They went from being a couple fighting for attention, to being made for each other! You can adjust the vertical grey divider for a wider or narrower bandwidth. The Wider the bandwidth the more pronounced the ducking effect will sound. 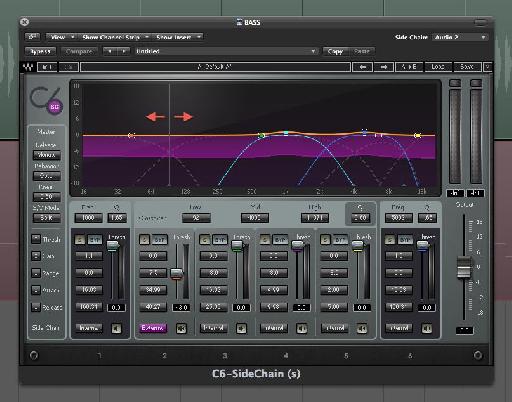 Now let's take a look at Brainworx/Audio Alliance's DynEQ. This is a dynamic equalizer. Just like Waves C6 SC, we can dynamically adjust a specific frequency range, but DynEQ focusses on being an equalizer, rather than a compressor like C6 SC. In fact, DynEQ's default behavior is to 'boost' frequency ranges. We won't be doing this since the focus of this article is on the reduction of frequencies triggered by a kick, but think about the creative possibilities here... you could send a hi-hat (with its output turned off) through DynEQ that triggers an increase in the specified frequency on another sound. Cool. 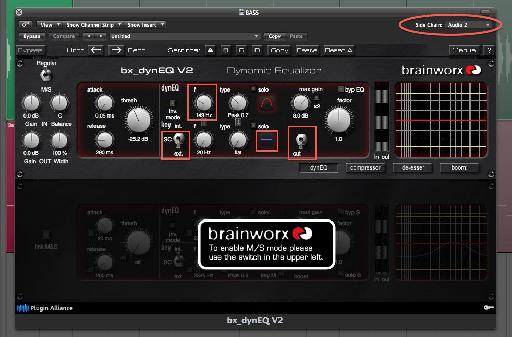 Let's say though that you want to be very specific, or you're not entirely sure what to set the frequency to. You could look at your kick with an analyzer. Wherever it hits the hardest, is the frequency you should set back in DynEQ. 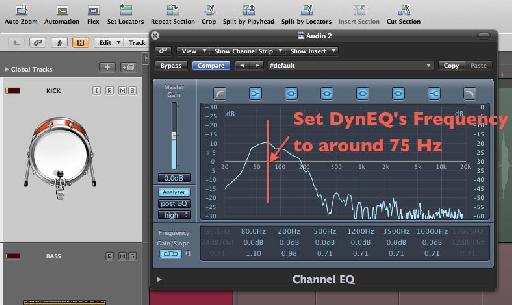 Like a compressor, DynEQ has a threshold you'll need to adjust before the dynamic adjustment kicks in, so I'll push it up till I see and hear the change. Here's a sample of how DynEQ sounds on the bass:

I like the way this sounds, especially after adjusting the Peak/Q parameter to broaden the frequency width a bit (You can do this in Waves C6 also if you use either of the two floating bands).

The last one, and most inexpensive one I'll show is Track Spacer. This plug-in is new, but it really does the trick and in a way the others don't. On Track Spacer, you don't have to choose the frequency or compression band. It listens to the incoming Side Chain input and inverts the equalization it receives, thus, punching a hole in the bass sound for the kick to sit within.

You place the effect directly on the sound you want to duck, and set its Side Chain the same way as the other plug-ins above. The large dial in the center allows you to adjust the percentage/ratio of the effect. Higher percentages pronounce the effect more. You also have low cut and high cut filters that allow you to shape the reduction if necessary. The large display shows you a great visual of what is actually happening to the sound. The top lighter colored analyzer waveform shows the incoming signal, and the bottom inverted waveform displays what is actually being done to the sound. 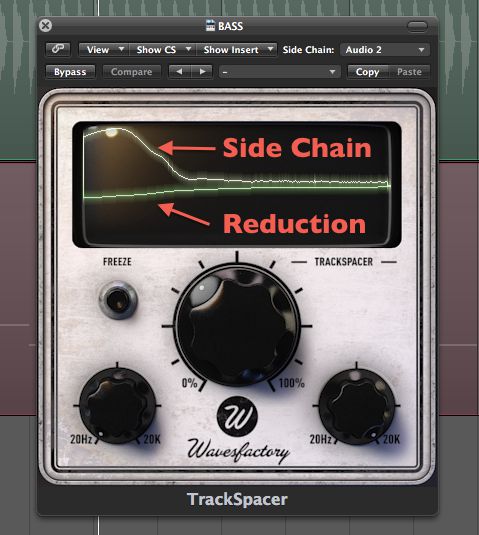 Hope you enjoyed the article!

Dream It. Do It.
Do you want to learn Superior Drummer: Killer Drums?
Yes, I want to learn!
No Thanks, I just want to read the article.
Feedback
How are we doing?
We'd love your thoughts, feedback and questions regarding our new site. All feedback is appreciated!
We do not respond to this form! If you need support, please visit our support page.
Thank you for your input!
Your message has been successfully sent
Course Advisor
Don't Know Where To Start?
Ask A Course Advisor