Logic's new MIDI FX Arpeggiator can add instant complexity to sustained chords, and even single notes. Based on the parameters you set, it can play notes in sequence up, down, up and down, across multiple octaves, and much more. When you go to record the arpeggio, it's a bit of a let down though. The actual notes it creates are not directly recorded, only your held chords or single notes. In this article I'll show you two ways of capturing the output of the arpeggiator. One method is actually built right into the arpeggiator itself! Let's get started.

First we'll explore how to use the Arpeggiator's MIDI Drag feature:

Step 1 - Add the Arpeggiator to a Software Instrument

Open a new Empty Project in Logic, and choose the ESP synth (the Setting 'Fat Square Bass' should work well with the Arpeggiator), then add the MIDI FX Arpeggiator to the channel strip. Hold a chord down and watch the small icon that looks like steps in the top left corner. Now release the chord. When you're holding a chord down, the icon is 'lit up.' This is a MIDI drag! Basically whatever pattern Arpeggiator creates, you can drag it out and into the Workspace/Arrange area. 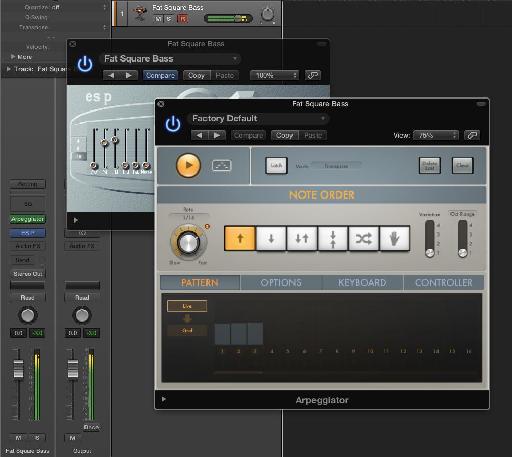 Step 2 - Drag the Pattern to the Track

Hold a simple three note chord down with one hand, and with your other free hand click the icon with your mouse/trackpad and drag it to the track in the workspace. There's your arpeggiation! Now you might be wondering why it's such a small slice, but remember what the arpeggiator is actually doing'¦ it's repeating the chord by playing the individual notes in sequence over and over again. 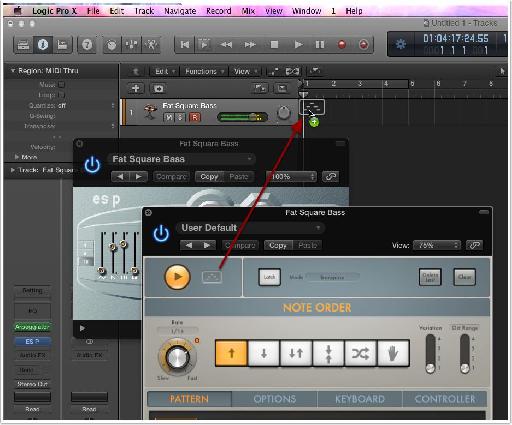 To play the arpeggiation for as long as you intended, simply loop the region for as many bars as necessary. Repeat this process for all the chords in your progression/song and you'll in effect, have built a note for note MIDI version of Arpeggiator's output. 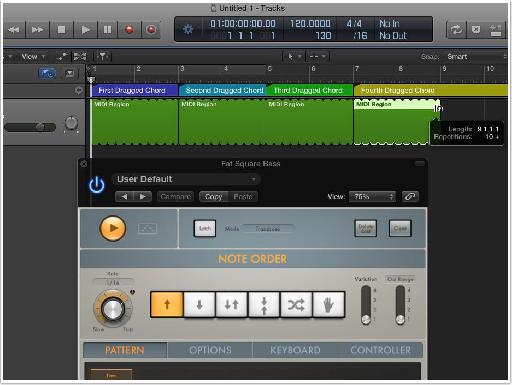 Remove or Bypass Arpeggiator now, since you're done with it! If you don't, the MIDI regions you've dragged will re-trigger Arpeggiator.

Keep in mind, when you're dragging out multiple arpeggios, position your mouse onto the next unoccupied bar. Arpeggiator's MIDI drag places its patterns on the start of a bar only. If say the patterns you're dragging are a half bar in length, and you position the second pattern in the middle of a bar, you'll overlap the dragged region onto the first. 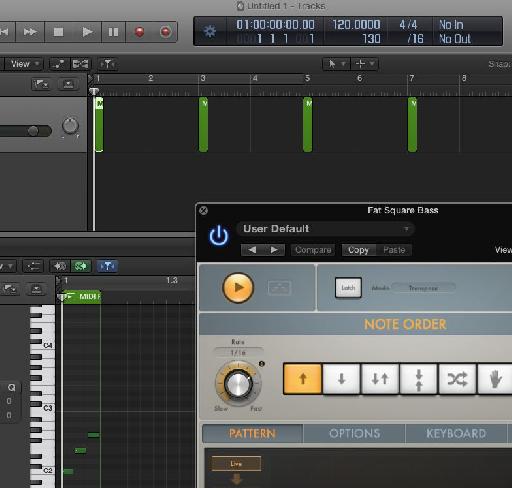 In the steps above, we simply used the default arpeggiation, but feel free to change any parameter on the arpeggiator'¦ MIDI drag will work with any pattern Arpeggiator creates. For example the default pattern simply plays 16th notes starting from the low note to the high note, if we change Arpeggiator to a more complex pattern like up and down, with an octave range of 4, the pattern you drag will be longer. 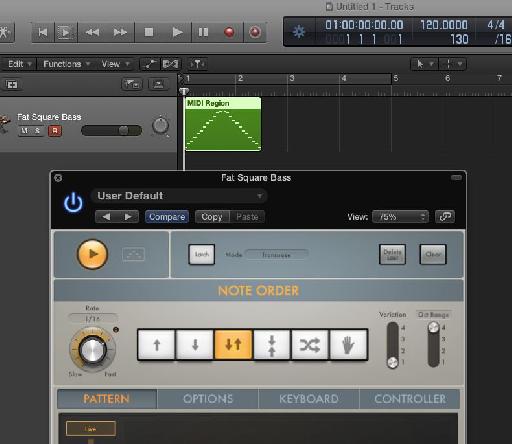 Use the Mac's IAC Driver to Capture MIDI:

OK, so now we know we can manually piece the Arpeggiator together with the drag button, but what about simply capturing the output of an already built chord structure, or for that matter, any MIDI FX output (not just Arpeggiator)? Since Logic doesn't yet allows for this, we'll need to use the Mac's built-in Inter-Application Communication driver, or IAC driver for short. This gives us a virtual path to first send Arpeggiator out of Logic, then back through as MIDI that Logic can then capture. Logic see's the IAC driver at its physical input just like it sees any incoming MIDI controller. Virtual or physical, Logic can't tell the difference.

First, we'll need to enable the IAC driver. You only have to do this once, as your Mac will remember this through restarts and shutdowns. Go to the Mac's Finder, click on the Go Menu and select Utilities. Open the application called Audio MIDI Setup. By default, only the audio side of audio/MIDI appears. Click on the Window menu, then onto Show MIDI Window. Double-click the IAC Driver icon in the window that appears. Make sure the 'Device is online' checkbox is enabled, then close the window and Audio MIDI Setup. Now that we've enabled the virtual path, let's go back to Logic. 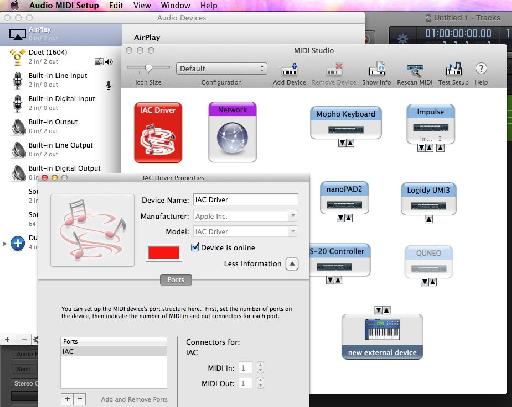 Duplicate the channel strip with the arpeggiator you want to capture. Click the New Track With Duplicate Setting Button. Change the instrument of the duplicated track from ESP (or whatever synth you used) to 'External Instrument' by clicking and holding, and then selecting it. By using the External instrument, we'll be able to send Arpeggiator's MIDI out of Logic. Click on the External Instrument to open it. from its MIDI Destination menu, select IAC Driver, then close its window. 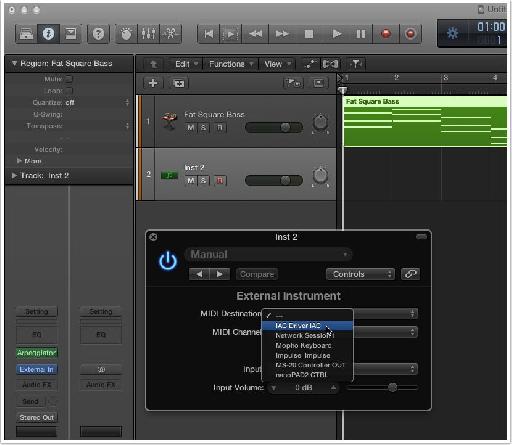 Step 3 - Move the MIDI to the External Instrument Track 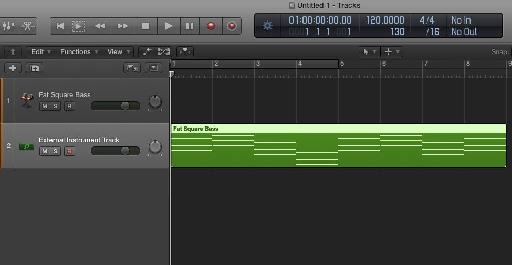 We're nearly there. Click back onto the original track, and bypass the Arpeggiator since you'll no longer need it. There should be no MIDI here since you've moved it down to the duplicated External Instrument track. Make sure the 'R' button is enabled, position the timeline at the start of the progression (that is now on the duplicated track) and start recording! Allow it to play all the way through'¦ as it records, you should see the individual notes being captured. 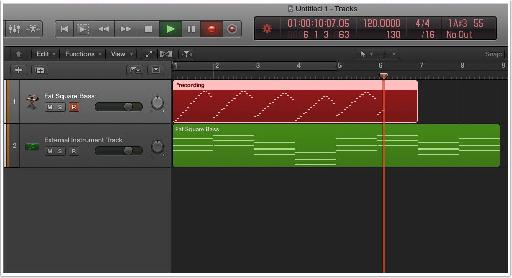 Once captured, you should immediately bypass the External Instrument and it's Arpeggiator since it's output will continue to send even when the track is muted! Depending on the speed of your Mac, how complex the song your working in is, and other factors, you might have to quantize the resulting captured MIDI. As I mentioned briefly above, this is also a great way to capture MIDI from any of the other MIDI FX plug-ins like Modulator, Note Repeater and Randomizer.

Hope you enjoyed this article, and thanks for reading it!