All Articles Logic Pro
Choosing The Right Synth Engine in Logic Pro X
Matt Vanacoro on Thu, February 9th 0 comments
Language
Logic Pro X has a wealth of synths bundled with it, but they all have their own unique character and potential uses. Matt Vanacoro sheds some light on exactly what those are.

If you're new to Logic, or even if you've been using it for a while and just haven't utilized the synth engines, trying to settle on a synthesizer virtual instrument can be quite daunting. There are a lot of choices, and in some cases the options are specifically compartmentalized to provide a very specific sound. This month, I'd love to take you through a little introductory tour through the various synthesizer instrument choices available in 10.3. There’s a lot of information available about the technical features of each synth, but I would really like to focus on the musical characteristics here, and examine what style each synth excels in.

For the purposes of this article, I'm going to focus on the instruments you would typically play with a keyboard. Ultrabeat drum synth is a bit of a beast that sits on its own and is a topic for another day! From FM synthesis to physical modeling, Logic has a ton of choices and can emulate quite a large library of vintage gear. I'll be taking a look at Alchemy, Retro Synth, Sculpture and the ES series of plugins. These plugins cover the entire scope of Logic virtual instruments designed specifically to give you thick bass, soaring leads, fat pads, and wild motion synths.

The 500 pound gorilla in the room is most definitely Alchemy. Formerly a standalone product by Camel Audio, Alchemy was integrated directly into Logic Pro X back around 2015. Alchemy is such a monster of a synth, I know of producers and engineers that switched their DAW over to Logic just because of the Alchemy integration. 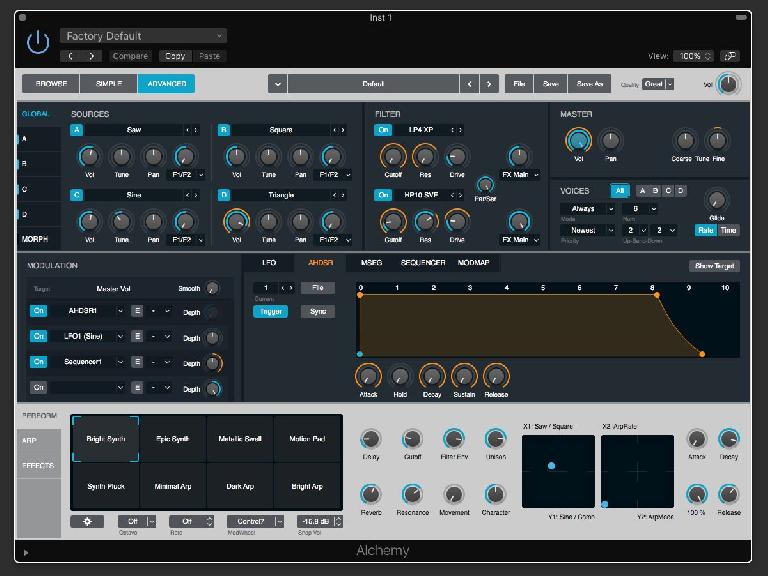 So what kind of sounds can you expect with Alchemy, and what's its deal? Alchemy's engine utilizes a hybrid of analog-style modeling and sample manipulation. That 'secret sauce' is what makes it so versatile. You can utilize standard subtractive synthesis, additive, granular, spectral, and formant engines to craft just about any synth sound in the world. You can't really pin down one specific style or sound that you'd want to use Alchemy for - it's that versatile.

Alchemy's transformation pad (the 8-box rectangle located at the bottom of the window) allows you to continually modulate just about every parameter in the instrument, letting you create 8 different 'sub-presets' for each patch. From here, you can effortlessly slide between the patches by dragging the selection rectangle from box to box. It allows for an infinite amount of possibilities.

When I'm producing a track that needs a more modern or 'timeless' sound, I often reach for Alchemy. Of course by simplifying down the engine and options a bit you can get some more classic and vintage sounds - but the staggering amount of control, modulation, and effects simply beg you to utilize the more complex tones of Alchemy.

Retro Synth is one of my favorite plugins to use, and that's saying something - I've got about a million virtual instrument libraries (a welcome side effect of working at AskAudio HQ!). Retro's Analog and Sync engines emulate standard Moog-like subtractive synths of old. Of course since you're in the digital realm, there are numerous tweaks that make working in this engine a pleasure. The hard sync effect of the synth engine particularly helps when making really distorted and rich sounding leads. 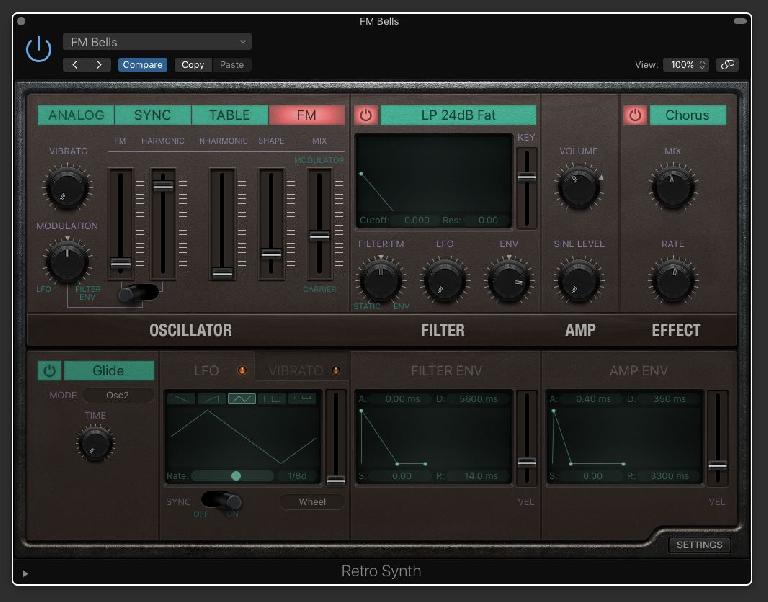 Table emulates a PPG wave table synth. Rather than specifically choosing a triangle, sawtooth or pulse wave like Analog, Table allows you to continually vary between the digital shapes with 2 shape knobs. They are notable sharper and (expectedly) more 'computerized' sounding than Analog, but they definitely cut through a mix - even the more subtle patches!

FM is a replica of the ubiquitous Yamaha DX7 synth. The graphical representation of this synth always makes me smile - Apple really killed it with nailing the 'vibe' of this synth. Truth be told, I have an actual DX7 sitting right next to my workstation in my studio, and I often reach for Retro Synth first if I want to quickly find some FM inspiration.

It may be taking the coward's way out a bit, but I'm going to honestly say I call up Retro Synth any time I am looking for a 'retro' sound. It's very aptly named, and the recreations are very faithful to the original. Any time modern dub/dance style tracks that call for some thick FM bass, Retro Synth is my first stop. If I need a Moog-style lead for a pop tune, you can bet Retro Synth is going to be at the top of my list.

Sculpture stands out from the crowd a bit simply because of its premise - physical modeling. When utilizing sculpture, you're going to be thinking about the character of every physical aspect of an instrument. Want a sound that combines the attack of a clarinet but the haunting overtones of a grand piano? It's all possible within sculpture. 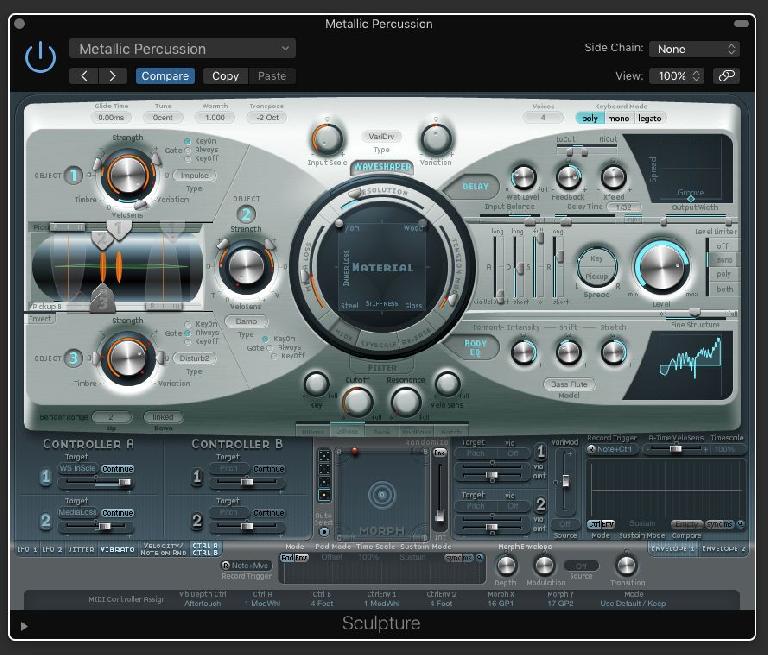 I've got a confession to make: I will often call up sculpture just for the fun of it, without a track to produce in mind, and just see what kind of wild combinations of sound I can create. It's a truly 'fun' instrument, and can make you feel a bit like a musical scientist!

So what kind of tracks will make me (digitally) reach for Sculpture? I have found that I utilize Sculpture the most when combining it with other synths. I can't even being to count the number of multitimbral sounds I have crafted using Sculpture to generate a specific attack and body tone and Retro Synth to create the sustained synth sound I'm looking for. Obviously, percussive synths sounds are a given here as well. Sculpture can often provide that finishing touch that will help you move a synth sound 'front and center' without actually having to jack up the volume in the mix too far.

The ES series synths are older workhorses that I love, but recognize that their time in future versions of Logic is likely limited. The synths are very compartmentalized, with ES E geared towards ensemble sounds (like a vintage string synth), EFM1 aimed squarely at FM sounds (like the DX7), ES P pointed at classic (Juno) polyphonic synths, and ES M for mono (or Moog? Hmmm...). ES 1 and ES 2 are much more mature synths, gaining complexity with each numerical iteration. 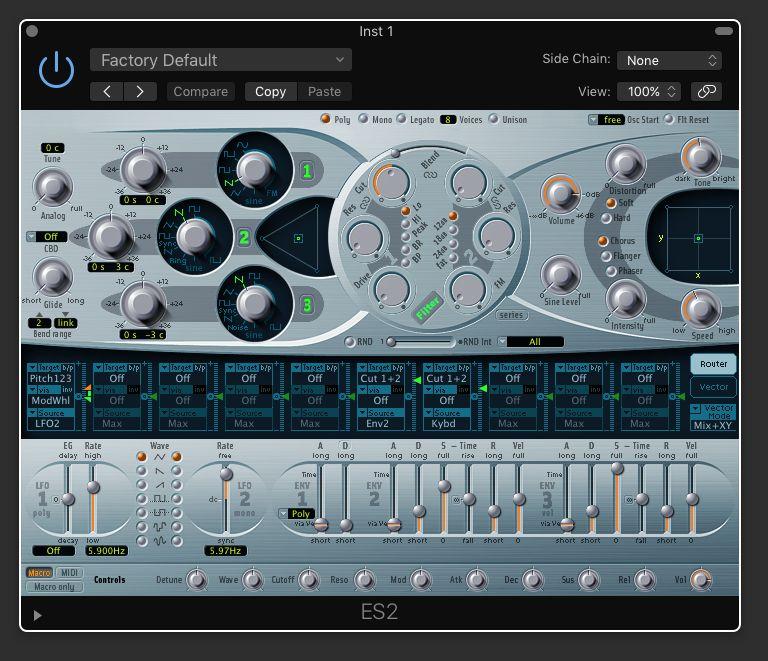 The ES synths all emulate sounds that can be created in a more modern fashion with Logic's other synths, but there's something to be said for their focused and simplistic nature. I often reach for them if I want to design a more simple sound from scratch. One of my favorite features of the entire line is how amazingly efficient they are! With many of the synths, you can see almost no appreciable CPU hit with a modern computer depending on the patch. If you’re looking to optimize your CPU usage for live performance or backing tracks, the ES series is your best bet to free up resources for your larger sample libraries on other tracks.