All Articles Audio Software
Choosing the Right Virtual Piano
Matt Vanacoro on Sat, July 2nd 0 comments
Language
What factors do you think about when choosing between the wide variety of virtual pianos out there? Matt Vanacoro recommends taking into account these 4 factors to help choose the right piano for you.

With so many choices at your fingertips, choosing a virtual piano to be your ‘main axe’ can be an intimidating task. Balancing sound quality, library size, user interface, CPU usage, and other qualities can be quite the juggling act. Luckily, most modern virtual pianos do a good job of addressing all of these points. Here are a few things to consider before you plunk down your hard-earned cash on a virtual plunking instrument!

Before we begin, I’m going to point out that a virtual piano’s sound is perhaps the most subjective thing in the audio world. I’ve had piano sounds that clients go wild for that I wouldn’t use to make a cell phone ringtone, and I’ve seen people hate on huge sample libraries that are universally adored. I’ve come to accept that a piano that sounds great to everyone is as abstract as Schrodinger’s Cat. All we have is a piano sound that sounds great to you. It’s just a very personal experience.

The size of your sample library can range from ‘no appreciable impact’ to ‘I hope you have a second hard drive just for your piano sound’. Modartt’s Pianoteq instrument generates sound through physical modeling. There aren’t any sample libraries involved, so it’s quite small. All of the sounds are generated in real time by the instrument.

Synthogy’s Ivory II, on the other hand, requires 49 gigabytes of space for a single piano library. You’ll want to carefully plan whether you are more comfortable sacrificing a lot of space for your piano sound or more CPU cycles (physical modeling is more CPU intensive than simple sample playback). 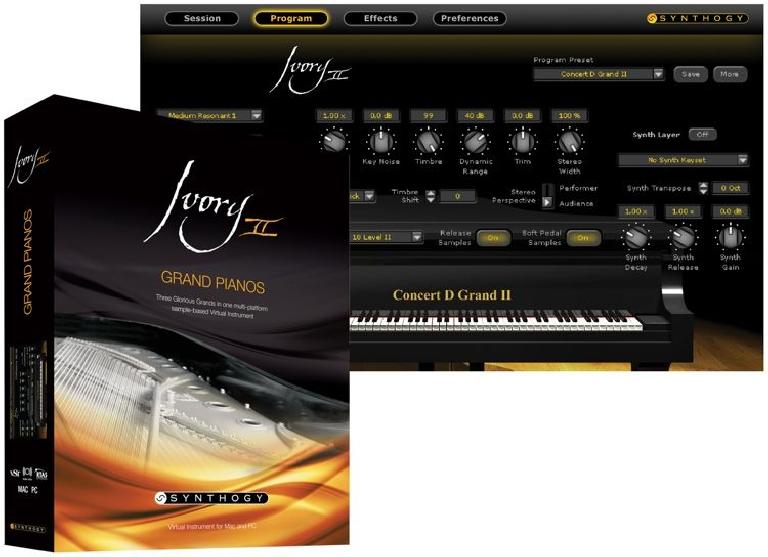 The Native Instruments acoustic piano series are blissfully simple to use. There aren’t a lot of controls on the screen. You pick a piano, you load it up, and you generally live with the sound. The good news is that they provide quite a few options for you, so you don’t really need to do much tweaking. On the other side of things, physical modeled instruments are a tweaker’s dream come true. You can adjust just about every aspect of the piano from hammer hardness to mic placement. The number of options can be daunting, but the concept is rewarding as you can truly customize your sound to fit the mix you’re working on.

While we’re on the subject of ‘the mix’, it’s important to keep in mind that a piano that sounds great on its own doesn’t necessarily cut through a mix properly. There are many presets and libraries that you may dismiss out of hand after listening to the instrument on its own, but sound fantastic inside of a mix. Why spend half an hour EQing a piano track to make it ‘pop’ out of a mix when your instrument offers a preset that is made to shine in a loud rock mix already?

This concept is why I am a fan of virtual instruments that provide a lot of preset options. It’s great to have a piano that sounds amazing on its own, but it’s even more fantastic to have a ‘pop preset’ that’s been specifically tailored to sit above a loud rock band and help craft a piano-driven song.

Try Before You Buy

With all of these options, trying out an instrument before you buy it is as important as ever! It’s best to try the instrument both on its own and inside of some kind of production if you can. Really, any one of the offerings from the major players in the game is a good buy—but these tips will help you pick the best buy for you and your music!