Logic's Score Editor has always been adept at producing a very readable score from MIDI notes without having to put too much effort into the process. Logic's algorithms '""smart code" '" are responsible for producing the time-saving automatic display of rests, as well as the proper interpretation of rhythmic values from unquantized recordings, to name two. But there are situations where these processes don't produce the desired result. Case in point:  producing piano music in the Score Editor. More often than not we need to be able to freely determine which notes appear in the treble and bass staves of the grand staff; left to its own devices, Logic will automatically display all notes below C3 in the bass staff of the grand staff. Fortunately this arbitrary split point can be overridden, allowing us to produce piano music without limitations as to which notes appear in which staff.

You can think of a Staff Styles as a mini application which shapes the appearance of musical notation based on MIDI notes and sustain pedal information in a region. Variations from one style to another include the number of staves for which notes are displayed on, the type of clefs shown, and much more. Included in Logic's library of preset Staff Styles is the "Piano" style, which displays two bracketed staves with treble and bass clefs (the grand staff). And if you've recorded a two-handed part on an instrument or MIDI track, chances are that Logic will automatically choose the Piano staff style, thanks to another one of Logic's algorithms: one that analyzes the range of notes you've played and automatically applies a staff style to that region. This feature is yet another time-saver, eliminating the step of having to manually select the Piano staff style.

(How to override this behavior, if desired, is beyond the scope of this article. But if you're curious to know more, post a question to me in the mPV Logic forum).

In Figure 1 we see a simple two-measure piano phrase which I played in and then tweaked, as described below, to produce the score as shown. It's a simple two-handed part, each hand playing a single line. A key aspect of this example is where the middle Cs appear: in the first measure they appear in the bass staff, and in the second bar, the treble.

But the score didn't start out looking this way. Let's take a step back and see what it looked like when I first opened the Score Editor on this part (see Figure 2).

In Figure 2, the second measure looks perfect: one line per hand (compare with Figure 1 above). Now, the notes in measure 1 should resemble those in measure 2, but because of the "insistent" split point set in the Piano Staff Styles, all middle Cs are going to appear in the treble clef, no matter what.

In Figure 3 below I've changed the split point to C#3. I did this in an effort to make the display look correct by trying to find a split point that would work for the entire piece. Alas, while this change causes measure 1 to look correct, it's made a mess of measure 2:

In fact, there is no happy medium here; no setting for the split point will give us the proper notation of this piece as we saw in Figure 1.

The solution to this perplexing problem is to take a different approach entirely. We'll dispense with trying to use the split point and instead utilize the Channel Assign feature of the Staff Styles. Here's how it works:

When a staff is assigned to a MIDI channel, notes on that channel will appear on that staff. With this method we can determine which notes appear on which staves just by setting them to different MIDI channels.

So here's the plan: First, decide on which MIDI channels to assign to right- and left-hand notes. In this example, the notes as recorded are all on channel 1, so I'll leave all right-hand notes on that channel and use channel 2 for the bass notes. Then, in the Staff Styles editor, assign those MIDI channels to the appropriate staves in the Assign:Chan section of the editor.

Now that we know the procedure, let's talk about how'"and when'"to perform each operation.

Before You Start (an optional step)

This is optional, but recommended: make a copy of the Piano staff style (I like to retain a copy of the original staff style in case I need it for another part). To copy the style, click/hold on "Piano" in the staff style menu. Scroll down to the bottom of the list and select ****DUPLICATE!****. Once the copy is created you can rename it, but most importantly, make sure you apply this style to all regions which are part of your piano piece. And of course, all editing described below will occur on this duplicated style. Again, this is optional.

Take Advantage of the Split. As we've seen, split points at C3 and C#3 won't work for us for the entire piece. However, with either split setting at least half of the part looks correct! So let's use this to our benefit and use a split that works for at least a good part of the piece. In this case I'm going to stick with C3 (as seen in Figure 2).

Now we're going to change the MIDI channel of the left hand notes. Start by selecting all of the notes in the bass staff.

It's clear that the middle Cs in the first measure really should be in the left hand, and we'll take care of that shortly. Changing the selected notes' MIDI channel can be accomplished in many different ways, but I recommend using the following key commands:

After using the 'Event Channel +1' command on the selected notes, they're now on channel 2. At this stage of the process the appearance of the score will remain that same, and that's OK. Two more steps to go and we'll have our score looking as we want it to.

In the Staff Styles editor, assign Staff 1 to channel 1, Staff 2 to channel 2 (note how the split point parameter disappears). 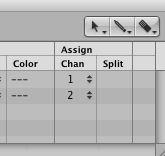 To summarize: with this approach, changing the channel of notes will move them between upper and lower staves as needed, eliminating the constraints of having a fixed split point.

Want to learn more about Logic? Check out the full range of Logic Video Tutorials.