All Articles Logic Pro
Creating Rhythmic Mayhem with Noise Gates in Logic Pro
Mike Watkinson on Mon, November 5th 1 comments
Language
Get creative with side chaining in Logic Pro. Mike Watkinson shows two different ways to set this up, with the focus on using this imaginatively in your musical projects.

The side-chain input on a noise gate has often been used for clearing up sloppy bass playing by feeding the (hopefully) tighter kick drum signal to trigger the noise gate on the bass track. The principle is that you can only hear signal from the bass guitar when the kick drum allows it. This idea can be easily extended to create chopped-up rhythmic patterns from previously sustained notes.

Let's say you have recorded a pad-like sound (maybe strings) as an audio file. You also have recorded a rhythmic part (maybe some percussion) as audio, and you want the strings to follow the rhythm of the percussion part. Proceed as follows:

Insert a noise gate on the strings track. 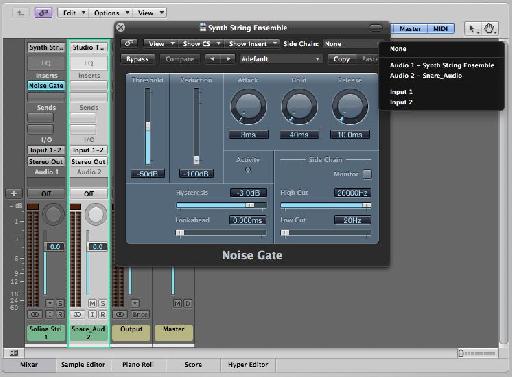 Select the percussion track as the side-chain input to the noise gate.

Adjust the noise gate threshold so that the percussion sound triggers the opening and closing of the gate. 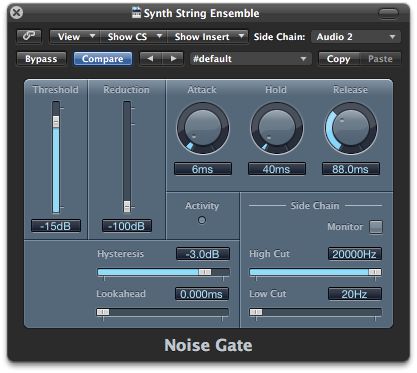 Adjust attack, hold and release times to tailor the shape of the resulting string notes.

... and the percussion part that will be used as a trigger track:

Attack, hold and release adjusted to shape the notes, and the trigger track has been muted:

In Logic Pro, noise gates can be used equally effectively on audio tracks and instrument tracks. But it is not so easy to set up an instrument track as the trigger track for a noise gate. Click on the side-chain input and you will see only audio tracks and buses listed as possible inputs. In this case then it is necessary to connect the output of the trigger track to a bus, and connect that to the side chain input.

In Logic, selecting a bus as an output (or send) automatically creates an aux track as the output of that bus. If you don't wish to hear the trigger track in the stereo mix, mute this aux track. 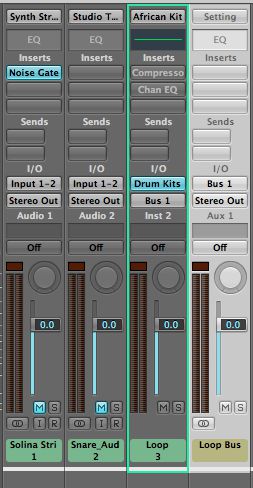 The software instrument track connected via a bus to an aux track - this will be muted.

Having connected the output of the trigger track to bus, select that bus as the input to the side chain of the noise gate on the strings track (or whatever sustained sound you are using) and adjust the settings of the noise gate as before. 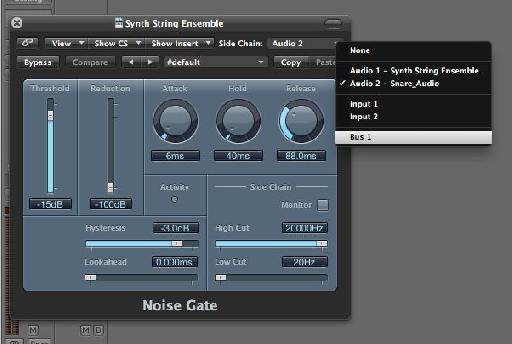 The bus shows up as an available input to the side-chain.

The second method is by far the most flexible as you can reprogram the trigger track to taste, even adjusting the velocity of some notes, which will cause the gate to respond in different ways. 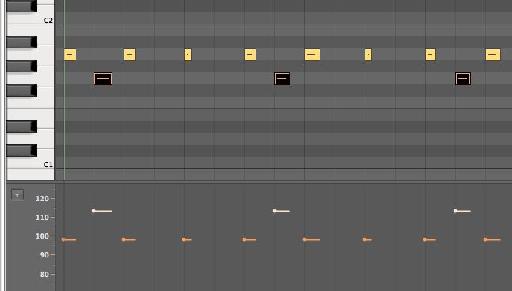 Adjusting the velocities of notes will make the gate response change.

Listen: The different length notes are caused by changes in velocity: