All Articles Logic Pro
Creating Stereo From Mono Tracks In Logic Pro X
Joe Albano on Mon, May 26th 1 comments
Language
Most times you'll record instruments in mono to a single channel, but sometimes you may want to beef these up in the mix and create stereo versions. Here's how, in Logic Pro X.

While the finished masters we create are always stereo, many of the individual tracks that make up the mix are mono'"single channel'"recordings, which are then panned appropriately to one side or the other. But sometimes, for a variety of reasons, we need an individual track to fill up space between left and right. Many engineers record in stereo whenever possible, particularly instruments that naturally have a wide spread, like acoustic piano, but even if a track's been recorded in mono, it's still possible to spread it out, for a wider image, after the fact.

There are several ways this can be accomplished, from doubling a part, to spreading a narrow image until it fills the space between the speakers. I'll go over three approaches to this that you can do easily in Logic.

1 - Double a track, Using the Delay in Logic's Region Inspector

When you need a track to fill up more space in the mix, one approach is to double the track'"add a second performance of the same part. Since no two performances can ever be exact in terms of pitch and timing, the slight differences between the two takes will keep them distinct'"they can then be panned to opposite sides of the mix, creating a nice, wide spread, with room in the middle for other instruments or vocals.

If you didn't record two distinct takes, you can still artificially double a part by making a copy of the track, and delaying the copying by approximately 20 milliseconds or so. While this won't have as loose, or human, a feel to it as a real second take, it will effectively create the doubling, and allow for the wide panning that'll nicely fill up space in the mix.

One quick and easy way to do this is to copy the recording's regions to another track, select the copies, and open the Region Inspector (to the left of the main window). 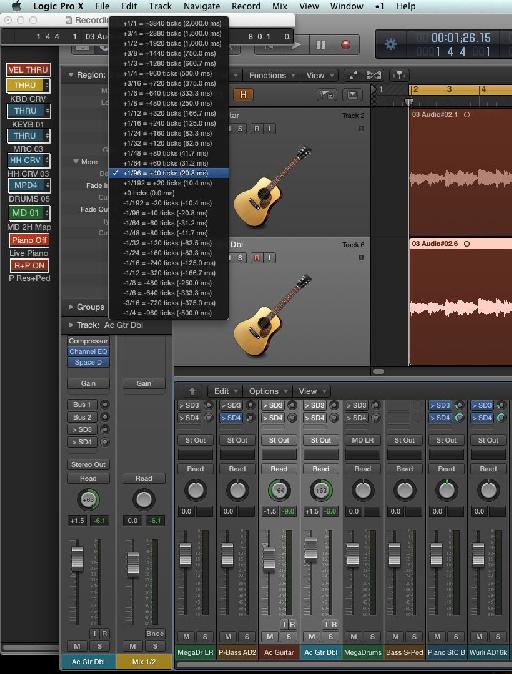 Setting a 20ms Delay in the Region Inspector for doubling.

Tab down the 'More' triangle, and you'll see the 'Delay' setting. Set this, via the pop-up menu, to approximately 20 milliseconds delay, to create the artificial doubling. 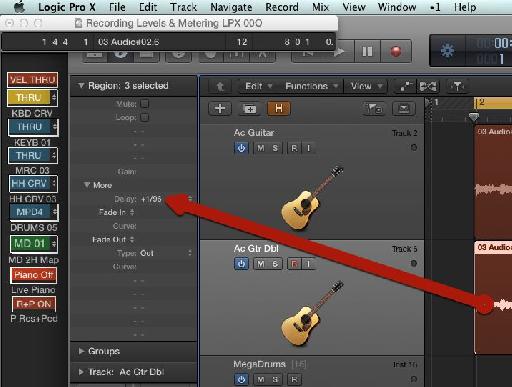 A 20ms Delay in the Region Inspector for doubling.

In the main mixer, pan the original track left and the delayed copy right. When you hit Play, you'll have a nice wide, doubled part.

Sometimes, in a busy mix, it's more convenient to double a track (or several) without having to create a new, extra track for each doubled performance. You can create a stereo doubling within a single Channel Strip by using a Delay plug-in'"specifically a mono-in, stereo-out version of the included Stereo Delay plug-in.

In the last insert slot in a mono channel, choose Delay -> Stereo Delay (Mono->Stereo) from the plug-in insert pop-up. You'll notice that the meter in that Channel Strip just changed from mono to stereo and the strip is now stereo from that point down. 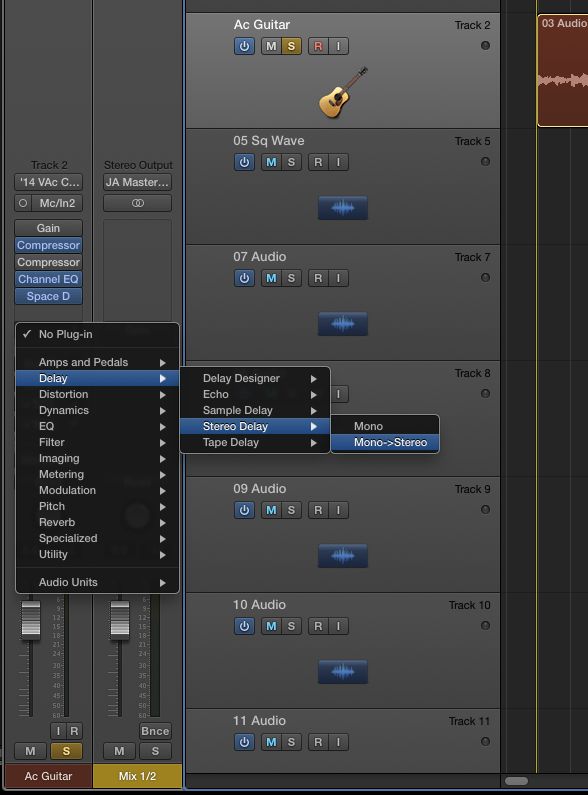 The Stereo delay plug-in has separate delay settings for left and right. Initially, it defaults to delay times that are in sync with the tempo. Disable this by turning off the 'Beat Sync' button at the top center. Set Left Delay to the lowest setting (you won't be using this delay anyway'"this will be the undelayed side), and Right Delay to 20 ms. Turn the Output Mix for left to 0% (dry, undelayed signal only), and right to 100% (delayed signal only). Finally, turn both left and right Feedback off, to 0%. 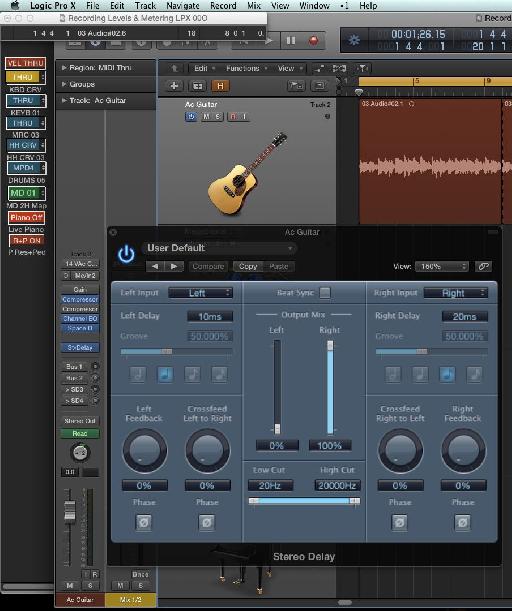 Settings in the Stereo Delay plug-in for Doubling.

Bypass the plug-in, hit play, and then kick it in. You should hear the same wide, doubled effect as before, but with only one Channel Strip needed. Once again, the un-delayed (left) side may seem too loud. You can correct for this with the Channel Strip's Pan/Balance knob, by turning it slightly to the delayed (right) side. A setting of +12 to +14 should do the trick.

Both of these approaches to doubling will work just fine. The second saves on space in the mixer, while the first gives you the opportunity to further process the two sides separately, with different EQ or other effects.

3 - Widen a Track, With the Stereo Spread Plug-In

Spreading or widening a track is a different effect than doubling. The result won't sound like two performances, but rather like a wide stereo recording of a single performance that fills up the space between the speakers.

Many people think they know a quick and dirty way to widen and thicken a track'"copy the track, pan the copy opposite the original, and flip the phase (polarity) of the copied track. The resulting phase cancellations may cause the image to widen'"to spread out, even beyond the speakers. But this is a bad idea'"if the tune is ever played in mono, the track will completely disappear!

The correct way to create a widening effect is with a plug-in like Logic's Stereo Spread. Once again, it should be inserted in the last slot, from the pop-up menu: Imaging > Stereo Spread (Mono->Stereo). What this plug-in does is alternatively boost and cut various frequencies, but opposite frequencies in the left and right channels. So if 1k and 5k and boosted, and 2k and 10k are cut on the left side, then 1k and 5k will be cut, and 2k and 10k boosted on the right side, etc. 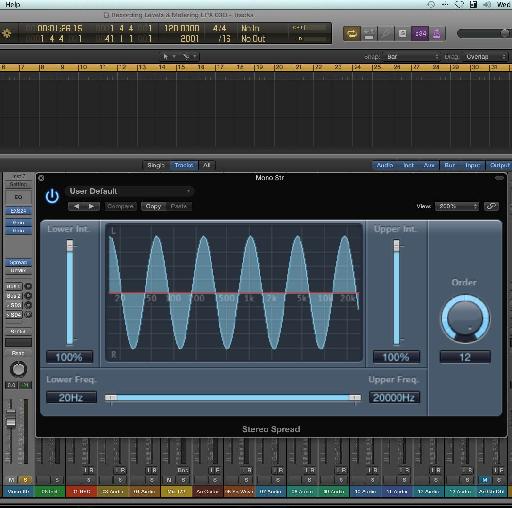 As a result, the image will spread out between the left and right, creating a nice, wide image of what is still a single performance. The various controls will affect the spread, but I usually find the effect to be best at the default settings: Lower and Upper Int. at maximum, Order at 12, and Freq at 20'"20k. Most importantly, if the width of the mix is ever reduced, or if it's ever heard in mono, the two sides will sum cleanly without affecting the sound'"the processing will disappear, and it'll sound like the original track!

All three of these methods for creating a stereo signal from a mono track are tried-and-true, and any of them can come in handy for adding a little something to a mix that needs to occupy a bit more space. Enjoy!