All Articles Logic Pro
Designing Dance Kicks in Logic Pro X
Darren Burgos on Mon, May 5th 10 comments
Language
If you like EDM, Logic Pro X and designing sounds, you'll get a kick out of this tutorial! Darren Burgos takes you on a tour of Ultrabeat. Your mission is simple: to design your own big kicks.

In today's dance music the kick is a vital part of the track/mix. Nearly every producer agrees that if you don't nail the kick, you don't have a track. It's becoming more and more common to look at the 'body/sub' and the 'click' (or attack transient) as two separate elements. Basically the body is the deep bass sound, and the click plays right at the head of the sound to add punch and snappiness. There are even plug-ins like Vengeance Sound's Metrum that focus specifically on this way of thinking.

In this article I'll show you how to easily build the kick's sub/body in Ultrabeat, and how to create a simple click maker from Logic's EFM1 synthesizer. We'll then combine them into one piece of audio for use in any sample player or for direct use in the arrange window.

Let's build the body of the kick in Ultrabeat. Unknown to many, Ultrabeat is quite an excellent kick synthesizer. I'm not talking about simply playing back a sample (which it does well also), but as a way to generate a very useful virtual oscillator. Open Ultrabeat, and Control-click the bottom instrument lane 1. Choose Init > Kick from the menu that appears. 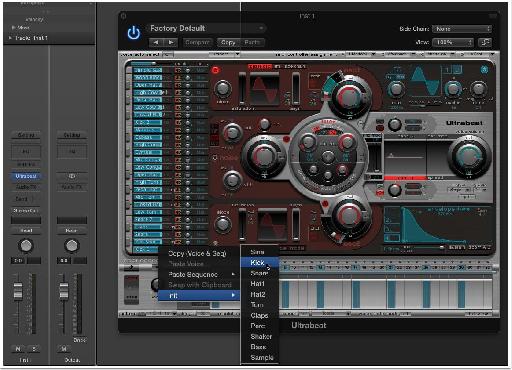 Step 2: Turn up the Volume

Only the top oscillator 1 is used to make this excellent 808 type sound. Since we're designing a sound, let's bring the volume up so it's nice and loud for when we convert it to audio. The turquoise blue area under the name of the sound is the volume. Click and move the value up by 10 dB. Be careful not to click and hold too long or Ultrabeat will think you're trying to move the voice/sound instead. Drag the volume slider up by 10 dB to make your kick nice and loud.

Step 3: Create a 4 on the Floor Region/Sequence

Let's create a simple kick sequence so we can easily test out the kicks we make. Control-click in the arrange area and choose Create Empty MIDI Region from the contextual menu. Double-click the region to open it in the Piano Roll. Switch to the Pencil tool and draw in a 4 on the floor pattern (note on every quarter note) on MIDI note C1. Raise the velocity up to above 100 on each note, then close the Piano Roll and use the 'L' key command to loop the region. 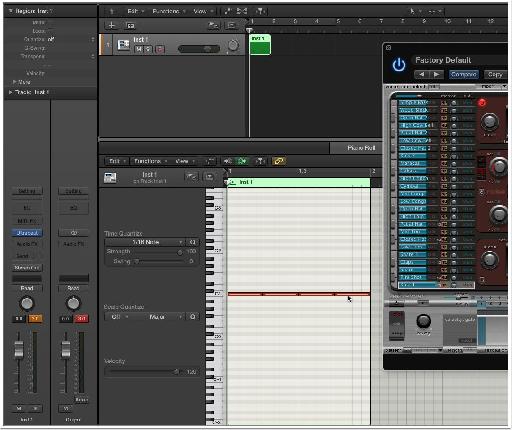 Step 4: Change the Pitch of the Kick Body

Changing the pitch on a sampled/audio kick even by as little as 2 semitones almost always diminishes the sound. Because our Ultrabeat kick body is still synthesized this is not an issue. Let's change the pitch of the kick by adjusting Oscillator 1's pitch parameter. I adjusted mine down to F0. 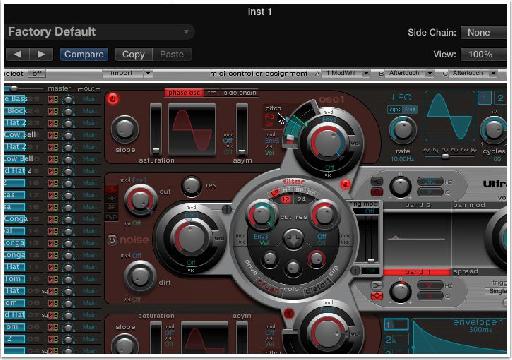 Adjust the pitch of your kick.

Keep in mind that it's very difficult to decipher pitch at such low frequencies, so if you can't adjust by ear, simply change the pitch to the key of your song, or just get it where you think it sounds deep and punchy enough for you.

Step 5: Adjust the sound of the Oscillator 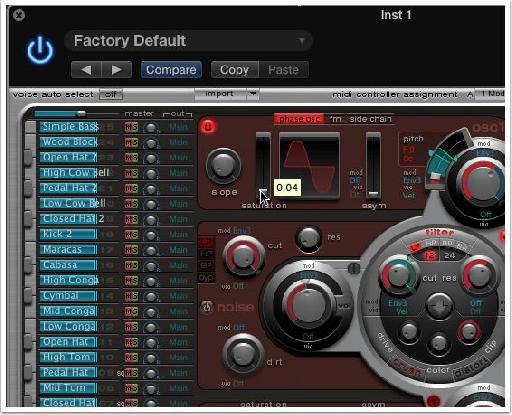 Tweak the Slope, Saturation and Asym parameters to your liking.

Let's adjust the pitch's envelope to shape the sound even further. I can tell it's being modified by Envelope 3 because it says so under the Mod parameter directly below the pitch adjustment. Click to select Envelope 3. If you click and hold on it, Ultrabeat shows you all the places it's being used. Adjust both the Attack and the Release time values and their two curve handles to taste. Adjust the pitch envelope to shape your sound.

Timing the release of the kick to the BPM of your track is often overlooked by some producers. This is an important step toward perfecting the groove. Change the BPM of the Logic's project to the tempo of the song the kick is intended for. Start playback in Logic, and adjust the Attack and Release time sliders (and their curve handles) of Envelope 4 until you get a sound that feels comfortable in your BPM of choice. Change the release of the kick to suit the BPM of your track.

Now let's create the click sound. Unlike subtractive synthesizers, it's quite natural for FM synths to generate percussive metallic sounds. This is why EFM1 is perfect for the job. Create a new software instrument track and open an EFM1. We don't want any low frequency material from EFM1 muddying up the kick body. On the Channel Strip, double-click directly above the EFM1 into the EQ square area to open the EQ. Enable the high pass/low cut filter and swipe out all the lows (set its frequency to around 1000 Hz). 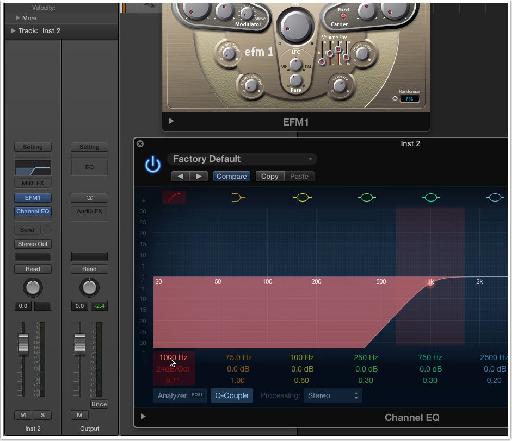 Filter out the low frequencies of the click sound with an EQ.

Option-drag the region you created for the kick down to the EFM1 track. If you know the key of the song you're making the kick for, then change the quarter notes in the region accordingly. 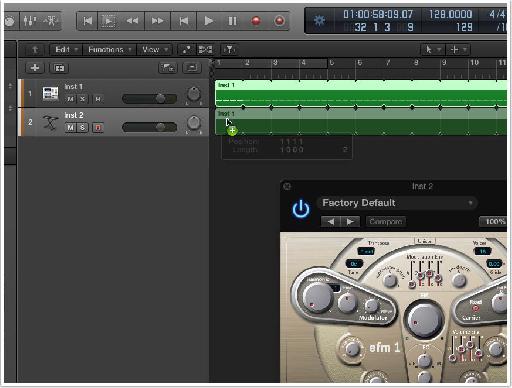 Option-drag the Ultrabeat region to your EFM1 track.

Let's head straight for EFM1's envelopes. Pull the Attack, Sustain and Release all the way down. Adjust the Decay so it's just barely above its lowest position. Do the same thing for the Modulation Envelope. 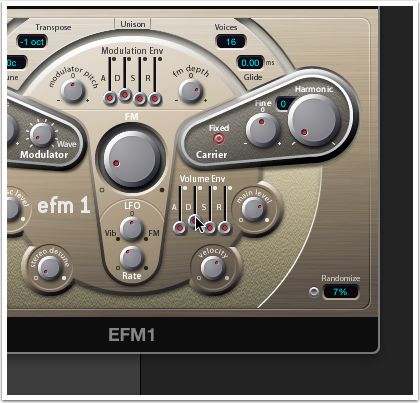 Now adjust nearly any parameter like both Harmonic's knobs, the center FM knob, FM Depth and more. There's an endless supply of clicks here. Try using EFM1's tuning knobs to match it perfectly to the key of your song. Try a longer Decay for a more pronounced click. If the click seems like it's phasing a bit or seems inconsistent when played together with the kick body from Ultrabeat, don't worry too much. In the final step we'll bounce the two sounds together as one.

Now that we've created the kick body in Ultrabeat and the click in EFM1, we'll wan't to combine these two sounds together as one piece of audio. Place a cycle around a single bar of music where they play together. If you've been building your kick in an existing project, make sure to solo only the kick and the click sound together. Select Bounce > Project or Section'¦ from Logic's File menu. Choose PCM as the destination format, and either AIFF or WAV as the File Format, 24-bit as the Resolution, leave everything else on its default setting, and check off 'Add to Project.' Click the Bounce button, name the sound, then click the Bounce button again. Back in the arrange window now, press the F key to open the Browser area. Click the Project tab if it's not already selected, find the file just created and drag it into the arrange window. 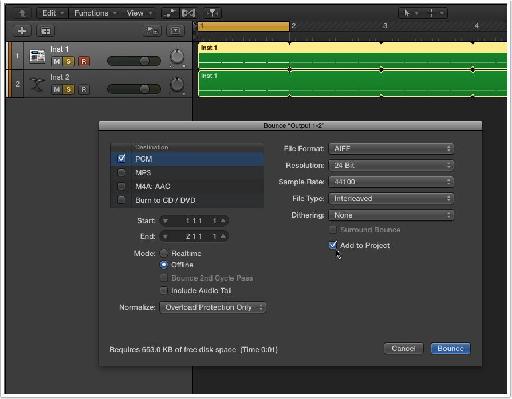 You're now ready to bounce your kick!

Solo the track with the bounced kick on it and listen to it carefully. Choose one of the four kicks and with the Scissors tool, cut away the other three so you're left with one single kick. At this point you can either sequence out the single kick directly in the arrange window, or load it up into your favorite sample player. If you do load it into a sample player, you'll want to re-save the single drum hit as a new independent piece of audio. You can do this easily by Control-clicking on the kick and choosing Convert > Convert to New Audio File(s). Select one kick and convert it to a single audio file.

Here's a sample of some kicks I made, and a download containing them! No additional processing was made to these, so imagine how they'll sound with a bit of EQ/Compression.

Darren Burgos
Darren started making music on computers when he was a teenager in 1987. His first computer was an Amiga, and when he realized the power of computer-based production, his addiction for making electronic music began. Darren switched to Mac in 1994 and started using Logic Pro. He's been involved in many music projects over the years including Psychoid. For two years Darren travelled with Apple showing Logic Pro to visitors of Macworld, NAMM, Remix Hotel and NAB. Currently, he teaches a class in L.A. on electronic music production using Logic for Logic Pro Help. Darren also runs two small businesses on Mixing, Mastering and Logic Pro training and support.
Related Videos
Comments (10)