Sample Logic is a leading developer of virtual instruments that blur the line between music and sound design. Its products tend towards the experimental but are also suitable for use in various music genres and XOSPHERE definitely falls into that category. Billed as an 'atmosphere creation tool', it's powered by the Kontakt Player and weighs in at around 6 GB. As usual you can offload this library to an external drive during installation so as not to eat up valuable space on a boot drive, and the system requirements are the same as Kontakt Player, which is to say fairly reasonable. Installation is straightforward and once up and running you'll see only a single instrument under the XOSPHERE library, with preset management handled inside the main instance of the instrument.

Four to the Floor

The instrument is built around four oscillators and each one has an identical set of controls. Each oscillator has its own set of presets, grouped into seven categories, which will load a whole array of settings into that oscillator. Each oscillator contains two atmospheres, one colored green and one purple, and these in turn have selectable samples, this time in eight categories. So you can mix and match samples and set the root note of each one for every oscillator as well as turning any of the four sections on or off. Naturally with all four on, you are using eight atmospheres so the sound gets pretty big, or alternatively you could strip it back and just use a couple. 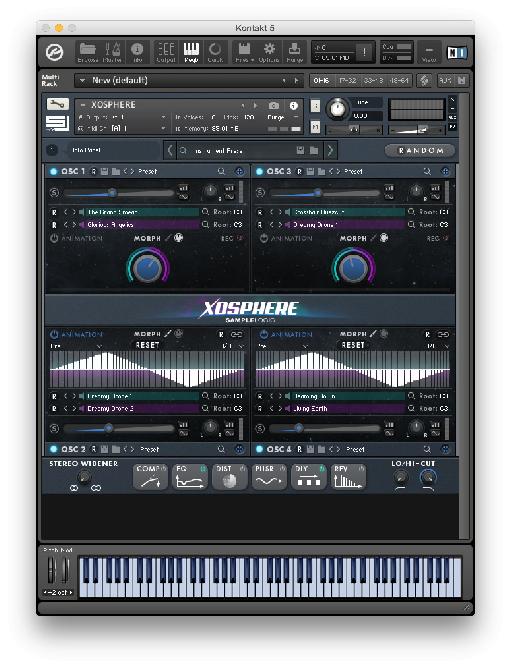 Each of the four sections works identically and has many sound tweaking controls.

The atmospheres themselves sound great: brooding, menacing, fluid and involving. But Sample Logic has taken things a step further with its animation tools. Each oscillator has an animation section that can be turned on or off and this lets you create morphing between the two atmospheres in use by drawing curves in with the mouse. You can also switch to the Morph Knob control and record changes that way, and MIDI learn is supported. Even better, there are animation presets available to quickly enter various pre-created types of transitions. Animation can be reset and made to play back at a variety of pre-determined speeds, so you can have some oscillators animating quickly and others more slowly. As you may imagine things quickly get pretty involved with up to eight sounds all morphing and moving at the same time, but it's actually easy to understand what's going on thanks to the clever workflow. 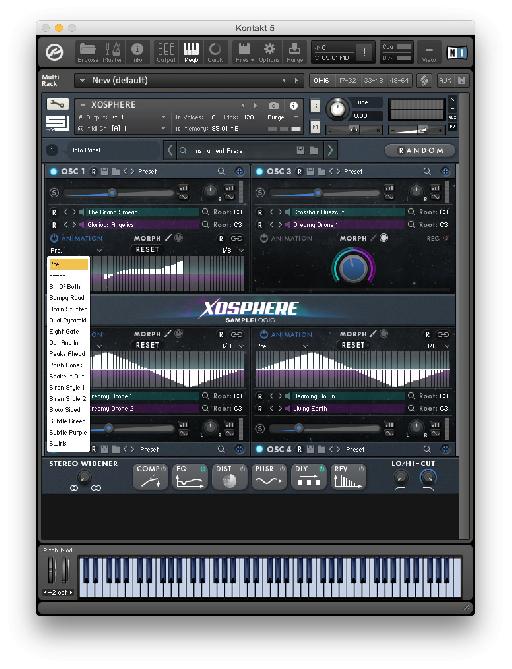 Draw in morphing animation, record it manually or select from a preset.

There's even more tweakability available in the form of further animation. For each oscillator you can of course set its volume so as to mix up to four at once, but you can also animate each volume control as well by pressing the Volume FX Animator button. This is a really nice feature where you get to create stepped changes to the volume of an oscillator using a special window. Set the resolution anywhere from slow to very fast and then use the sliders or a grid interface to create volume animation. There are presets here too if you wish to use them, and also randomization, quantize and invert shortcuts to save you time. The standard pattern length is 16 but you can increase this all the way as far as 128 steps to create some really long-evolving patterns for held notes. Additionally, a volume LFO control is available with configurable waveform type, speed, fade and amount controls. A similar system exists for automating the panning of any of the four oscillators and this can be used to fire sounds to the left and right over time. Again, it's well implemented and easy to use. 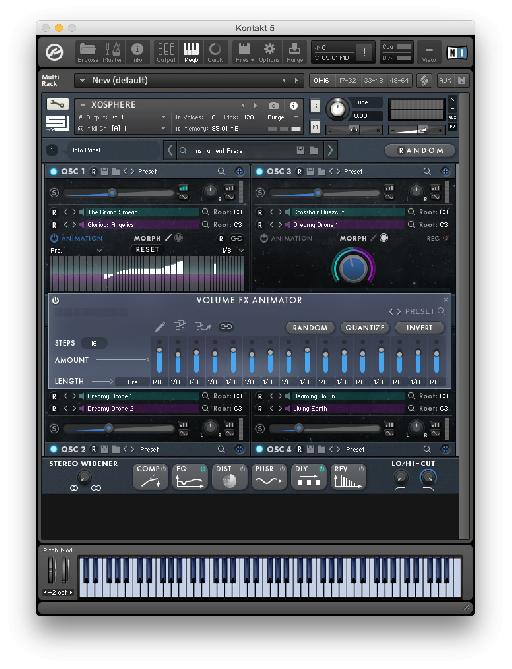 Various animators throughout the interface let you add movement and life to sounds.

Each oscillator can be expanded to reveal its detailed control section and here you'll find pitch and sample start controls, and lo-cut and hi-cut filters each with FX animators just like you get for volume and pan. There's an ADSR section for sound shaping and a Convolver that uses impulse responses and convolution technology to further warp the sound, again with presets and an animator.

XOPSHERE's presets are excellent'"there are over 275 supplied and of course you can build your own with the more than 350 atmospheres available. The sheer programmability of the instrument means there are more possible combinations than you are likely to be able to try out, but if you're in a hurry there are actually ways to speed things up. Randomization is available in multiple parts of the instrument and these are denoted by a small R button in certain places including entire oscillators and individual atmosphere selection areas. When you press the Random button, the instrument loads new, random settings into any location with randomization enabled. So it's able to come up with endless new combinations of sounds and settings based on its library, and you're likely to find something that suits you sooner rather than later by using this trick. 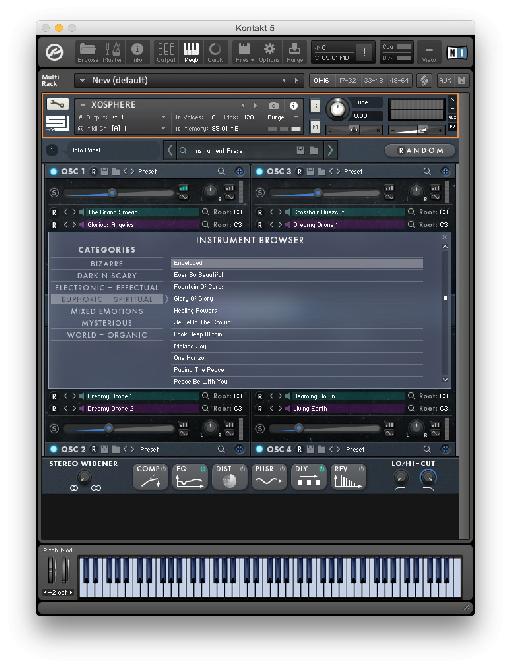 There are lots of atmospheres that you can mix in any combination.

There's a lot going on with all the morphing and various layers, but XOSPHERE also has some great built-in master effects to add an extra layer of polish and intensity to your sounds. At the base is the effects section with a stereo widener and lo and hi cut filters at either end, and six effects in the middle: compression, EQ, distortion, phasing, delay and reverb. Each one can be switched on or off and clicking on it reveals a simple but functional controller section. Some effects have presets and some have animator sections available for advanced setup, so by adding processing you can make your sounds even bigger. They are master effects so you can't process individual oscillator sections separately inside the instrument, though the effects within each oscillator (filter, convolver) do work independently of the others. 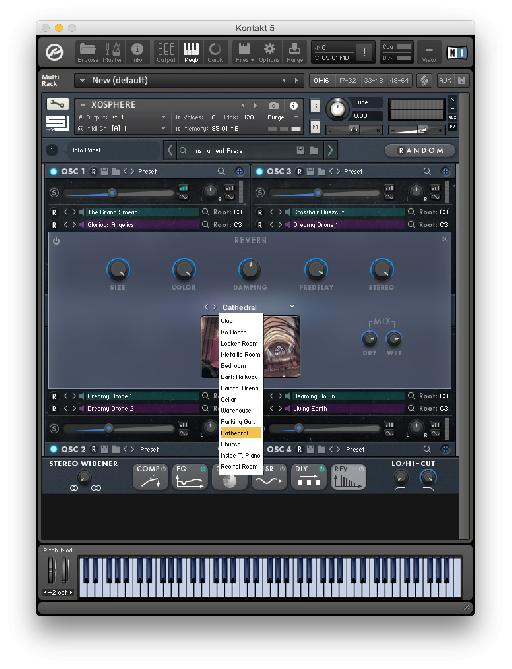 Add master effects to bring even more depth and sparkle to the sounds.

XOSPHERE is a remarkably powerful instrument that is capable of creating some stunning, multilayered and textured sounds that are perfect for film, TV and game soundtrack design. They're good for various different genres of music too, though after loading a few presets you'll probably agree that '˜cinematic' is what this instrument does exceptionally well. The many animators available and the randomization tools mean that you can generate new sounds quickly on a macro or wider level and adding movement and interest to patches is straightforward as well. It's true that there are quite a lot of small buttons and popout sections but overall it's not difficult to pick up and learn, not least because each of the four sections works identically. The samples alone make this a good atmospheric instrument but the addition of the various animators really takes it to the next level and means that when Sample Logic claims this could be the last atmosphere generator you'll ever need, they may be on to something.