Feed your inner sound designer with this set of twelve one-minute atmospheric pieces of musical abstraction by Flintpope. Twelve Minutes was originally created as a set of sound designs for Native Instruments sample download site sounds.com. Flintpope put them all (yes, twelve one-minute soundscapes) into one free rompler to plug-in to your DAW as a VST or Audio Unit. Why not experiment with these audio backdrops to make some unusual spaces between the beats, or maybe just layer them into quirky pads for filmic effect?

This VST/AU is polyphonic. A short Release is pre-set to stop chaos but can be increased to create chaos if required. Playing a new note re-triggers the chosen sample from the start. To stop all sound if chaos is too chaotic just hit the Kill button.

Presets can be changed on the fly for interesting overdubs, and experimenting with the Release on the fly (and any of the controls e.g. Verb)) can create interesting and responsive textures. HOWEVER, see LIMITATIONS below for what changes actually get recorded in your DAW. This is a get it onto tape kind of instrument so get your cassette or external recorder fired up and improvise. 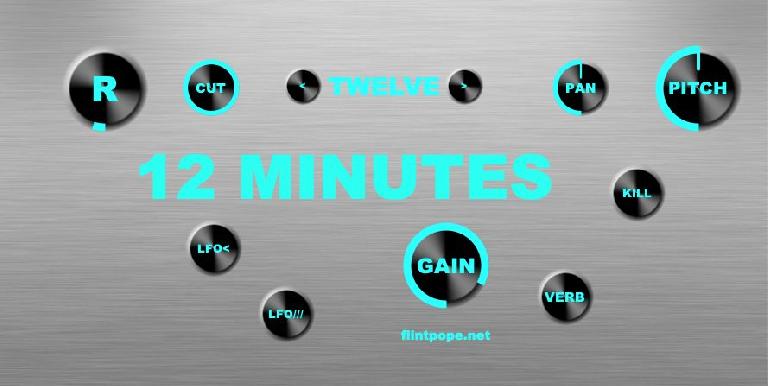 NOTE: LFO Waveform is set to Square and destination is set to Pan. The other options are, well, stupid. And they clutter up the GUI.

This VST/AU responds to pitchbend from a midi/usb keyboard and the mod wheel controls LFO Amount, over-riding the on-screen dial.

This box is made with Maizesoft which allows assignable sliders within your DAW for ADSR and Filter C/O but nothing else. This is not a Flintpope issue so don’t get in touch thanks! The Release and CUT settings are also somewhat insensitive and only make a useful difference near the zero end of the dial (extreme left).