All Articles GarageBand
GarageBand Tutorial: Create Space in your Mix
G.W. Childs IV on Thu, December 15th 0 comments
Language
Nobody enjoys being trapped in a cramped space. Neither does your music! G.W. Childs gives some useful pointers on how to create space in your mix in GarageBand.

Let's face it, GarageBand makes music fun. Fun in the sense that you can easily bring in any instrument that you've ever wanted to work with, and it sounds great. It's fun, also in the sense that it makes things easy!

So, let's break this down now:

Well, if things sound so good, if it's so fun and easy, why don't all of the mixes coming out of GarageBand sound amazing?

One common misconception with mixing is that if everything in the mix is full, vibrant, and huge, the whole mix will sound great. Because all of the loops, instruments, and drums are already huge in GarageBand, this oftentimes means that when you put all of these huge elements together, that you'll get this huge wall of sound. And, yes, "wall of sound" sounds good on paper, but this often means pure power without definition.

Ultimately,  definition separates a wall of sound from an amazing mix. Let's go through a few things together that could really bring some definition to your mix.

It's a common practice with all engineers and producers to start working with the drums first. And with good reason: drums and bass make up the foundation of your song!

Another reason for starting with drums would be that they tend to be the simplest element of the song. It's easy to solo them, feel them out a bit, and then when they sound great, solo another track to play along with them.

Loops tend to be the predominant fashion in which drums are applied to songs in GarageBand, as opposed to the preferred method of having all drums separated. Let's examine how to make drum loops bigger. Compression would normally be the way you'd go to make drums stand out more, but the loops in GarageBand are pretty compressed already. Instead, and since we're trying to make space, let's add a little air. I'll put a small amount of reverb from the Edit tab of my drums onto my kick-snare drum loop. 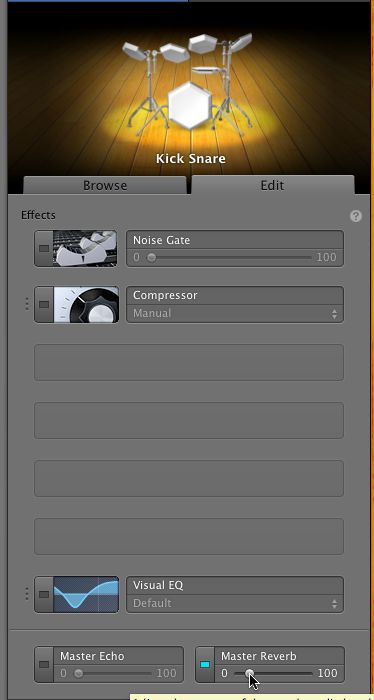 Here is my main drum loop before:

Reverb is for adding a little bit of dimension...when used in light amounts. But when used properly, it always tends to air out the mix, give it dimension, open it up a little.

Once the main drums are done, in this case being a kick and snare loop, it's time to work with the hi-hats, and other higher frequency instruments within your mix.

Bring in each element solo button by solo button. As you hear each part added in, compare it against your kick and snare. If the added element is too loud or too soft compared to those, use the volume fader to adjust the level.

Once you have the levels right, here's something else to think about: How would the band be positioned on stage? Would the hi-hat be in the center of the drum kit? Nope. It would be to the side of the drum kit like all hi-hats. Using the pan knobs in GarageBand, you can reposition the hi-hat stereophonically within your mix to where it sits off to the right, or left.

Panning is oftentimes very much disregarded by new producers and engineers, but when you think about it, moving things to the left and right creates an openness in the middle of your mix while you listen. This allows the kick to sit in the middle, vocals to sit in the middle, but all the other elements are spaced around these main elements so that you have... space!

Now, we've gotten the hi-hat taken care of, the drums, etc. Now would be a good time to take a look at some bass. Stay tuned to The Hub for some tricks on phattening up your bass in GarageBand!