All Articles Native Instruments
Get Creative With Containers in NI Guitar Rig 5
Toby Pitman on Wed, August 15th 1 comments
Language
Toby Pitman explores NI Guitar Rig 5's new container modules. You can use them in all sorts of rack-based ways which, as he discovers, makes them versatile for studio and performance musicians.

Guitar Rig 5's new Container module is a welcome addition to the plugin. Probably the thing it's been most compared to is Reason's Combinator rack module and that's a fair assessment I guess. It lets you build a rack within a rack and map any parameters you like to a series of Macro controls.

Guitar Rig has kind of evolved recently into something more than amp simulation. It has become a global enclosure for many of NI's new effects like the Solid Mix Series, Vintage Compressors and Traktors 12 range of effects. I can see how this happened as Guitar Rig has always been one of the most configurable and versatile effects plugins on the market.

The Container makes everything much more tweakable with this macro control. You'll find the Container in the Tools menu in the Components tab. Let's drag one in. 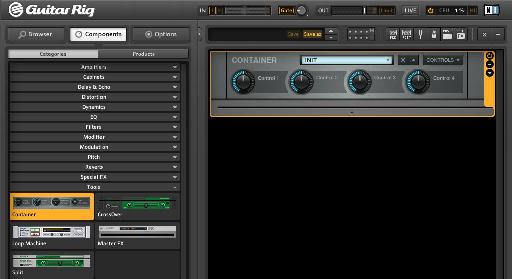 The four Macro knobs at the top have a hidden feature that really makes things interesting. If you open up the module using the arrow in the top right corner you'll see some extra parameters.

Basically you can assign up to eight parameters to every Macro! Now go to the Controls drop down menu and select Add.

You now get another row of four Macro controls.

You can have up to sixteen of these Macro controls in a container, all of which can control eight parameters! That's, well...a lot! 128 to be exact! 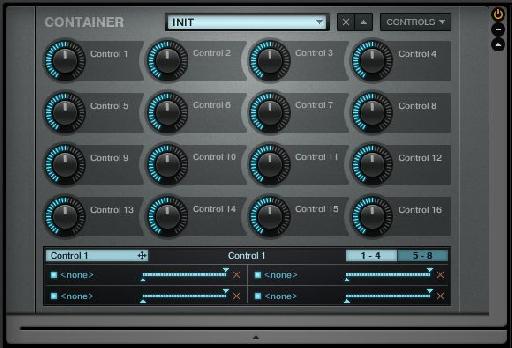 Now for complex effect setups this is awesome and your mind could explode with all the possibilities! I'm going to show you a very basic example of how you could use this to shape a guitar sound and control it with one hardware controller.

Here I've got a basic amp setup. A Compressor, a Tweedman and a Vintage Verb. Fairly standard stuff.

Here's the sound I've dialed in. Kind of a clean sound with a bit of crunch to it.

To assign my Macro to something, I just drag it (you'll see it highlight Orange) on to the parameter I want. This will assign it to the first controller for that Macro. 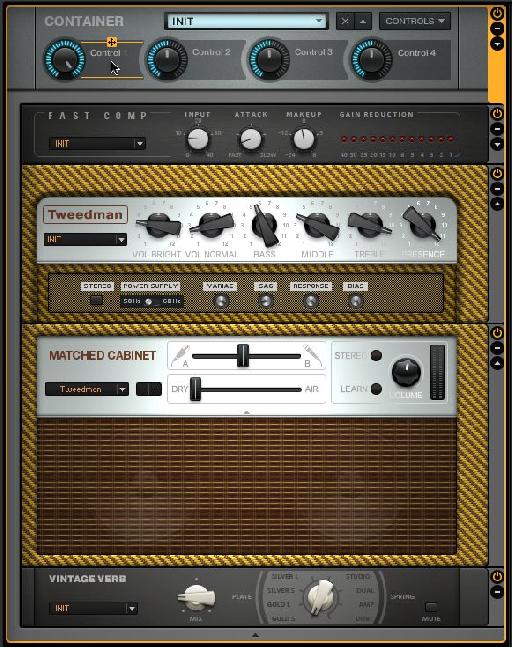 I can also just activate the Macro by moving it and drag the crosshair in the assignments window. Again this will assign it to the first controller for that Macro. 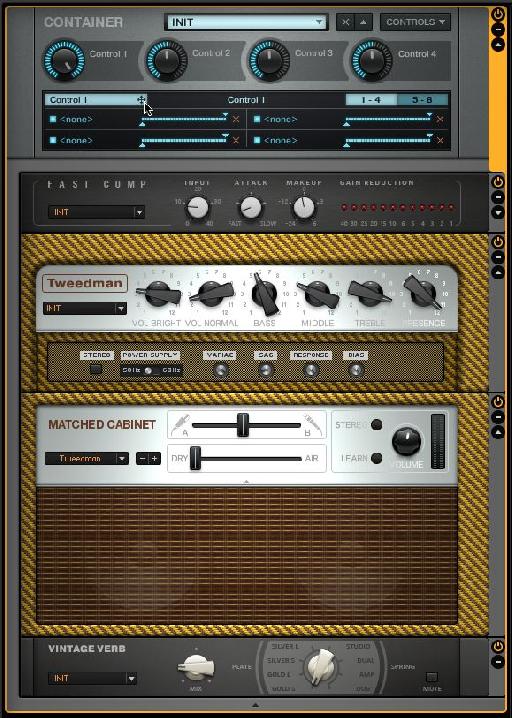 I can also scale the amount the Macro control will effect the assignment using the sliders to set a Min and Max value. Here you can see I've made some assignments to Volume Bright, Volume Normal, Mid and Bass (I've inverted this using the Min/Max sliders so it decreases) on controllers 1-4. 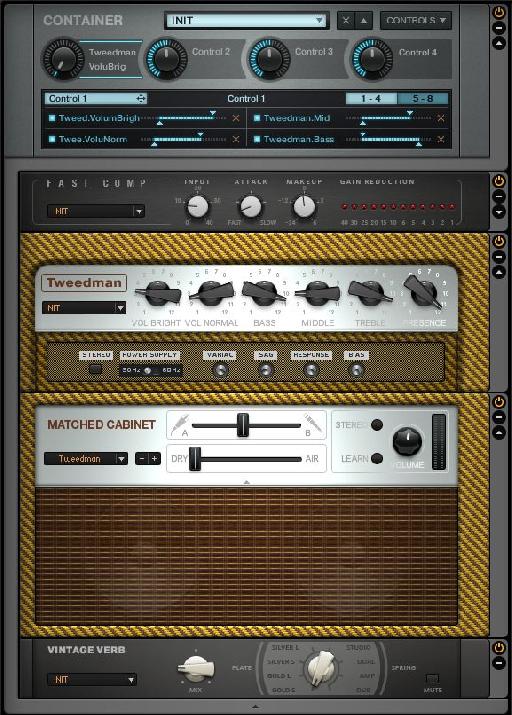 and my end values. 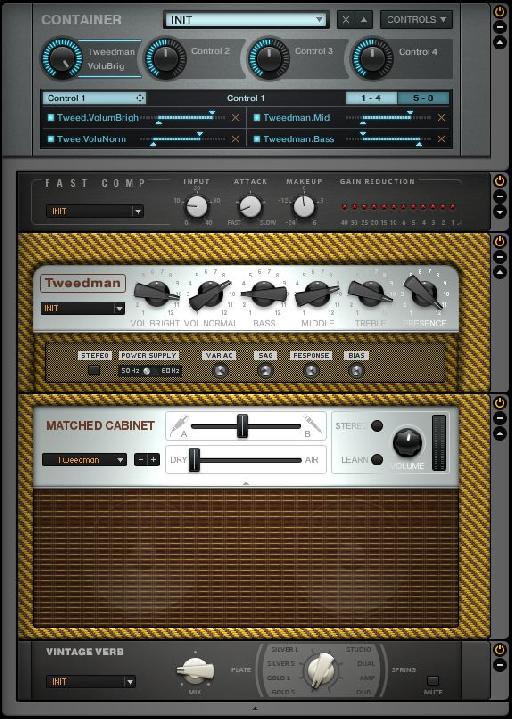 But we can do so much more now. I've mapped some more parameters to controller 5-8, namely: 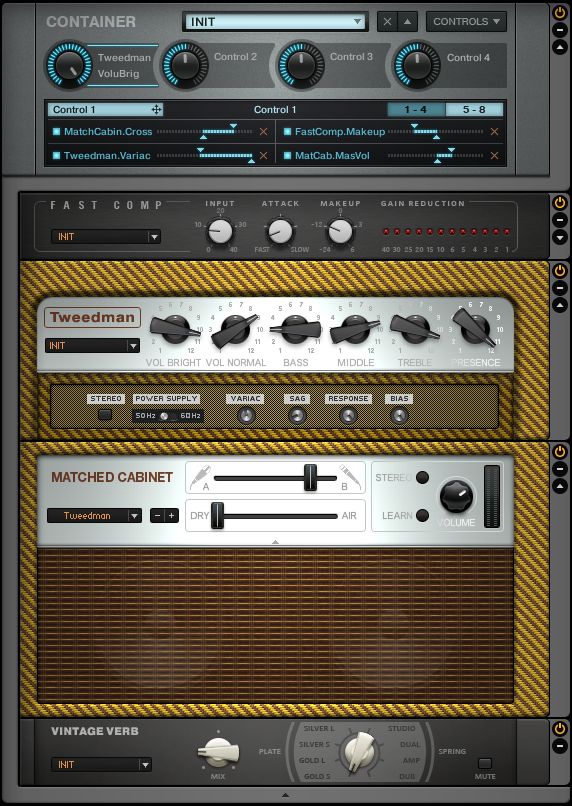 I can now automate between the two amp tones over time.

You could map this to an Expression pedal (mine broke just before doing this!!) to control the blend in real time with your foot!

The Container has really opened things up for live recording and performance, not only with Amp sounds but for complex effect patches that are really tweakable in real time from just a few controllers. And in my books that's all good!

Dream It. Do It.
Do you want to learn Guitar Rig and The Studio Processors?
Yes, I want to learn!
No Thanks, I just want to read the article.
Feedback
How are we doing?
We'd love your thoughts, feedback and questions regarding our new site. All feedback is appreciated!
We do not respond to this form! If you need support, please visit our support page.
Thank you for your input!
Your message has been successfully sent
Course Advisor
Don't Know Where To Start?
Ask A Course Advisor