All Articles Logic Pro
Getting Started With Logic Pro X's Smart Controls
Joe Albano on Thu, June 30th 2 comments
Language
Logic X's Smart Controls provide a tremendous customizable interface that mean you no longer need to have multiple plug-ins open to control them. But they do a whole lot more as Joe Albano explains.

Features like the newer Patch format (which saves all inserts, Sends, and even Send destinations in a Channel Strip) and Track Stacks (which save multiple tracks, including Instrument combinations and effects) are terrific ways to create more complex and powerful sounds and effects presets that can easily be re-used, even between different Logic Projects. But when it comes time to customize or tweak a complex Patch or Track Stack that consists of multiple plug-ins, it would be inefficient to have to constantly open and arrange several plug-in windows on the screen.

Well, Smart Controls come to the rescue—this convenient feature lets you set up what’s basically a macro control panel for a complex sound, that can include the most-frequently accessed controls (which Logic terms “screen controls”) for multiple parameters (up to 12) from multiple plug-ins in a Channel Strip, and then save one of these configurable panels with each Patch or each track in a Track Stack. If you haven’t yet taken the time to explore this useful feature, here’s a brief introduction to Logic’s Smart Controls. 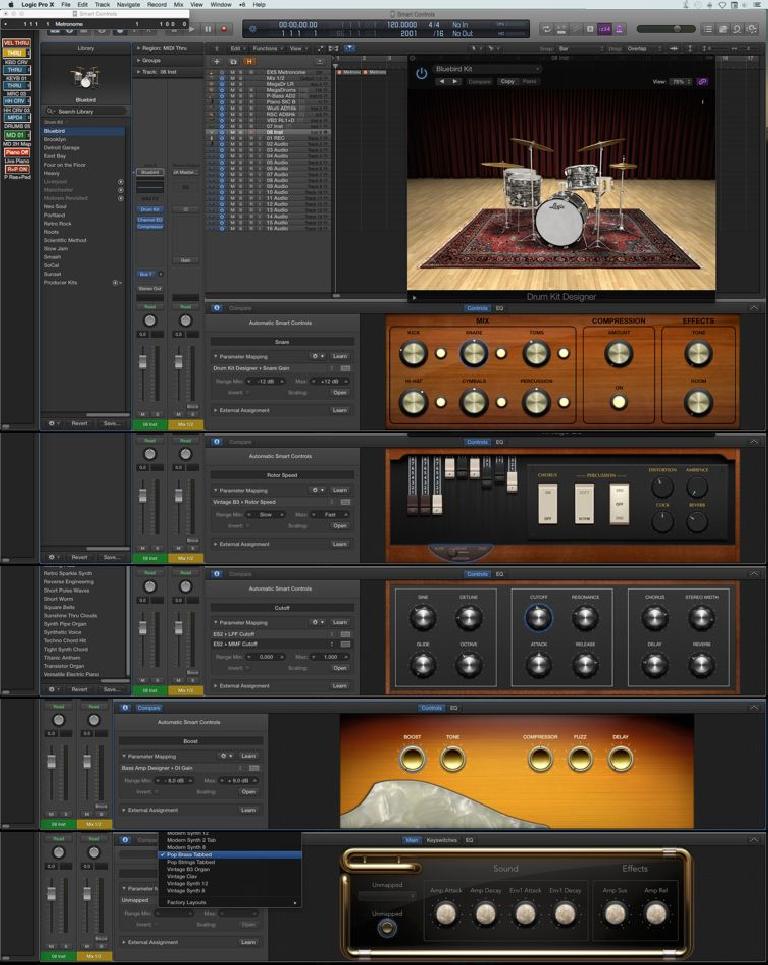 You open up the Smart Controls pane from its icon in the header, or with the “B” key. All the Logic Patches in the Library have useful Smart Controls panels already set up for them, but of course you can tweak these or roll your own—more on that in a minute. A Smart Control set may include knobs, buttons, switches, and even submenus—up to a total of 12-screen controls for a panel. Some of the factory Smart Control panels seem to have elements that are not currently available when creating your own from scratch, but assumedly more user options will be added as the feature matures.

The screen controls in a particular panel would typically be a mixture of the most useful controls from different instrument and/or effects plugins inserted in that Channel Strip, plus any controls on the Channel Strip surface itself that it would make sense to include. Each of the Smart Control panel’s screen controls is assigned to a specific plug-in control via a process called Mapping, and if you want to change or customize those Mappings, it’s easy to do (see below)—you’d then re-Save the Patch as a new user preset, with your own custom Smart Control panel settings. If you’ve made your own Patch, you can select an appropriate Smart Control set from a collection of Templates, or create one from scratch, using layout Templates and programming controls available form the Smart Control pane’s Inspector (this requires Advanced Tools to be enabled in Logic’s Preferences, but if you’re serious about working in Logic, you should already have them all on anyway!).

If you do want to create a Smart Control panel for your new Instrument or Patch, you’d click the Inspector icon, and select a Template from the popup menu at the top of the Inspector area. There is a large collection of preset Templates, with various graphics and layouts—it’d be worth spending a little time getting familiar with what’s available before you start creating/editing your own Smart Control panels. If you choose “automatic Smart Controls”, Logic will select an appropriate one based on the plug-ins in the Strip. You can also instruct Logic to auto-map either all screen controls or all unmapped screen controls from a second popup menu next to the Parameter Mapping header.

Of course, you may have a more specific Mapping in mind. In that case, you can manually map each screen control by clicking on it, and then making the Mapping(s) in the parameter Mapping box in the Inspector area.

As you can see in Fig 2, a third pop-up menu lists all the controls available to be Mapped in all the plug-ins in the Strip, and a couple of additional ones as well, like Articulation IDs (a type of metadata used by some Logic Instruments). If you open the plug-in window(s), you can more quickly set the Mappings by enabling the Learn button and clicking on the control(s) to be Mapped on the plug-in front panel. 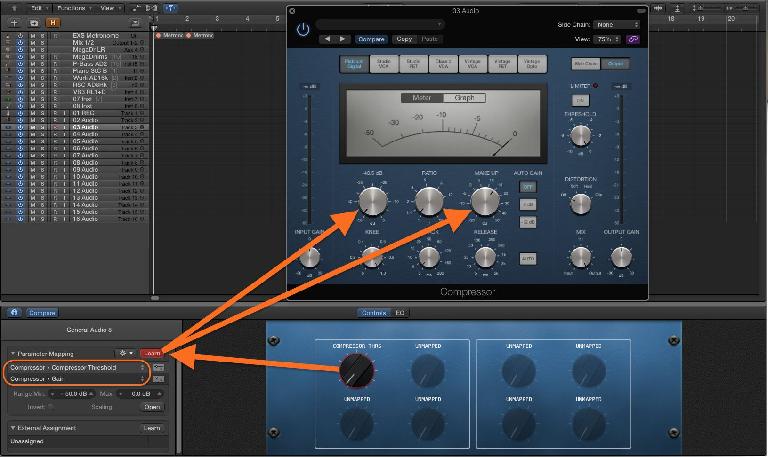 One of the cool aspects of Smart Controls is that they can function as macro controls—an individual screen control can be Mapped to more than one parameter simultaneously, even in multiple plug-ins. A good example of this is found in one of the Compressor presets, where the same knob is mapped to both Threshold and Makeup Gain (Fig 3), making it much easier to experiment with different amounts of compression on the fly, without being distracted by level differences. You can independently set the range of each Mapped destination (even when there are multiple Mappings for a screen control), and even set custom response curves. In the Compressor example, this would let you fine-tune the amount of Makeup Gain to match different Threshold settings, making for a much more useful option than the Compressor’s own Auto-Gain feature.

Of course, you can also assign external MIDI controls, on a keyboard controller or other hardware surface, to the Smart Controls’ screen controls. Naturally, this is done via the External Assignment box at the bottom of the Inspector area. The easiest way is to select the Smart Control you want to assign a hardware fader/knob to, enable Learn (specifically the Learn button in the External Assignment box), and move the external control through its range—then disable Learn and the assignment is made. This is the same procedure as assigning external MIDI controls directly to parameters in Logic, and if you want to remove the assignment, a click on the pencil icon to the right of the assignment name will open the Controller Assignment window, where you can delete the assignment.

But be aware that assigning external controls to Smart Controls comes with a caveat. When an external control is assigned this way, it is intercepted before it ever gets to Logic’s regular MIDI input, and will no longer be available for other use—so, for example, if you assign the modwheel to a Smart Control, it’ll no longer show up  at the MIDI input or be recorded in any other MIDI or Instrument track, until you delete the Smart Control assignment, releasing that hardware control and restoring it to normal functionality.

You can even control the Arpeggiator MIDI plug-in from the Smart Controls pane, via the Arpeggiator icon and its associated popup menu at the upper left of the pane. And, of course, you can Automate Smart Controls, just like any control in Logic. But take note, when you Automate Smart Control adjustments, the Automation curves that are recorded do not directly point to the destination/target parameter for that Smart Control—instead they point to the Smart Control itself, which in turn controls its assigned (Mapped) parameter in the plug-in. If you change assignments after recording Automation, the Automation data will then affect the new assigned control, which may or may not make any sense, so this particular implementation is something to keep in mind.

The best way to get familiar with the possibilities offered by Smart Controls is to go through Factory presets and take note of how they’re used—you may get some ideas, and at the very least, you’ll likely find some very useful assignments that will improve efficiency and help you to work.. well.. smarter. 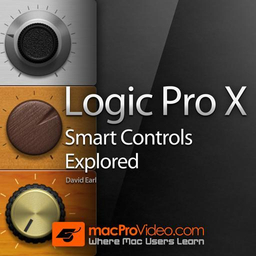