All Articles Pro Tools
Getting to Grips with Pro Tools AudioSuite-Only Plug-Ins
Joe Albano on Fri, October 16th 3 comments
Language
If you've been avoiding the AudioSuite menu in favor of using real-time AAX plugins in Pro Tools, it might be worth investigating them again. Joe Albano shows the extra processing features on offer.

While most of the plug-ins in the AudioSuite menu are offline (non-realtime) versions of real-time (channel strip insert) plug-ins, there are a number of included AudioSuite plug-ins that don’t have real-time (AAX) equivalents. If you don’t feel the need to go up to the AudioSuite menu much, you may not even be aware of them, but they do offer additional processing capabilities that could come in handy. 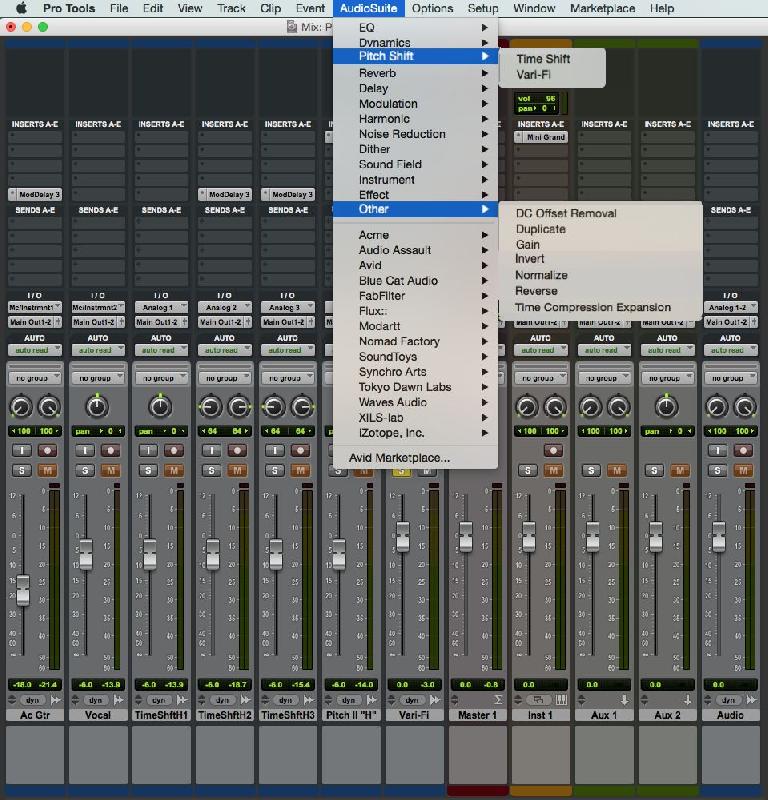 There are eight of these: Duplicate, DC-Offet Removal, Invert, Gain, Normalize, Reverse, Time Shift, and Vari-Fi. Most are simple utilities (sometimes with additional features added to equivalent real-time options), and a couple offer creative processing. I’ll briefly go through each of them...

In the AudioSuite menu’s “Other” sub-menu, you’ll find six utility plug-ins. Duplicate is a quick and easy way to make a copy of the audio in a selection, and drop the copy into the Clip List or Playlist. The new audiofile will be a duplicate of just the raw audio data, unaffected by any channel strip settings (volume/pan/automation) or plug-in processing (Bounce-to-Disk would include all those settings, unless you zero/bypass them). 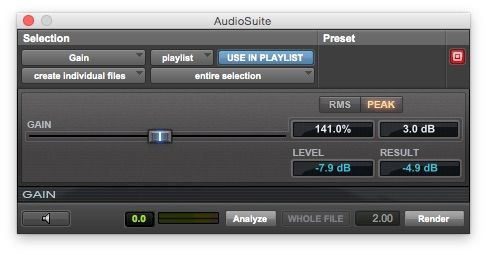 Fig 2 The Gain plug-in, with its Analyze feature. 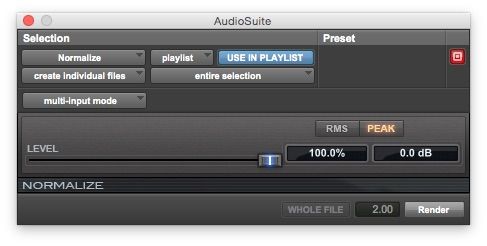 This is typically used to take an audio recording (like a finished mix) that’s a little low in level, and quickly make it as loud as possible without overload. For a mix, a target level of around -0.3 to -1 dBFS is advised; for a track that will be further processed in a mix, a level no higher than -3 dBFS will allow more headroom. But keep in mind, normalizing is not the way to increase the level of a mix to those typical commercial (hot) levels—for that you’ll need a mastering brickwall limiter.

Reverse does exactly what you’d expect—reverses the playback of the selected section of audio. You can get either that classic psychedelic reverse effect, or use it to create a build-up out of a note’s decay (Audio Example 1). 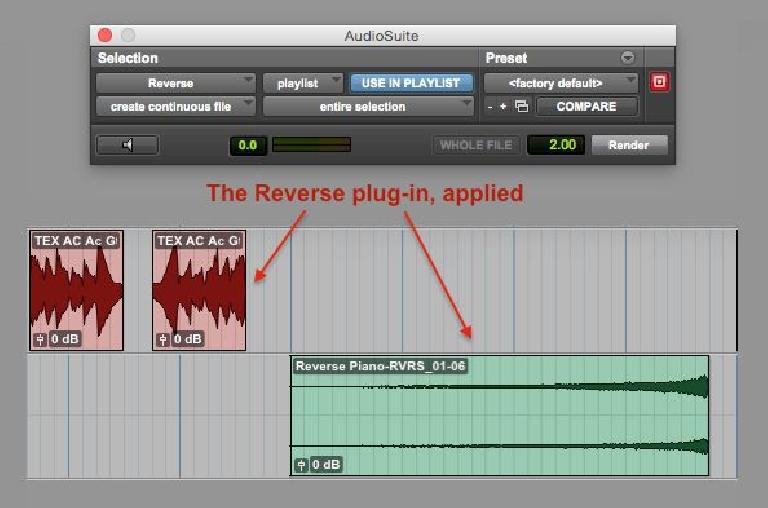 Audio Example 1—The Reverse plug-in applied to guitar and piano:

Under the Pitch Shift sub-menu, you’ll find the Time Shift plug-in (I know, it’s poorly named—it’s really does Time and Pitch shift effects). There are a lot more controls here than the other utility plugs, so no room for details—I’ll just do the big picture. 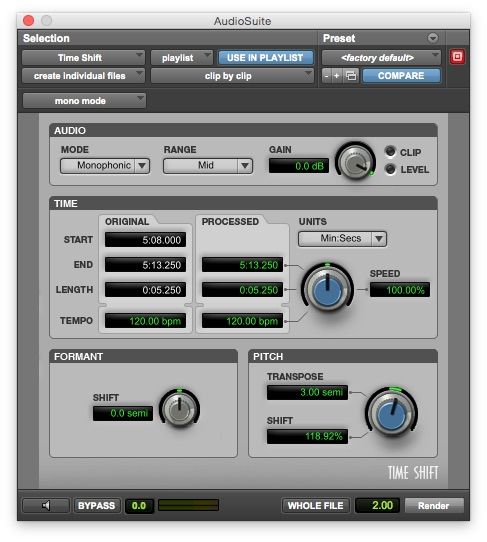 This plug-in offers an alternative to Elastic Audio’s realtime time-shifting capabilities. The algorithm here falls somewhere between EA’s real-time processing and its high-end X-Form offline option, which has the best audio quality Pro Tools offers (Time Shift supplanted the even older “Time Compression Expansion” AudioSuite plug-in, which is still available, in the “Other” sub-menu).

The Pitch-Shifting here offers something over & above the realtime Pitch II plug-in or EA’s Elastic Pitch feature. While Pitch II and Elastic Pitch provide easy real-time or per-clip options (respectively) for simple pitch shifts (small intonation corrections, ideally), their algorithms are less capable of handling larger shifts, making them less suitable for more demanding creative uses like generating harmonies and such. Time Shift’s pitch-shifting does a better job—with a more capable algorithm (and Formant adjustment, in Monophonic mode), shifts of several semitones, while not perfect-sounding, are much more useable (Audio Example 2).

Finally, Vari-Fi brings the classic turntable or tape-machine varispeed effect to the table (Audio Example 3). You can accomplish this with Elastic Audio as well, but I think it’s even quicker and easier to do here. 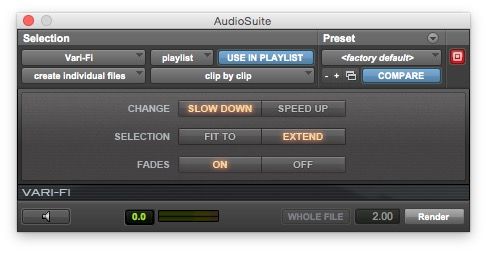 So those are Pro Tools’ AudioSuite-only plug-ins—from basic utility functions to the occasional creative effect, they’re a handy set of tools to add to the usual realtime processing.

Take Your Pro Tools Skills to the Next Level in The Academy.
Related 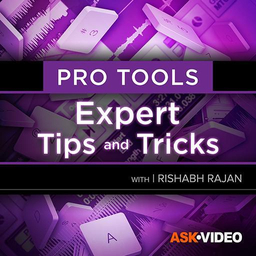 Dream It. Do It.
Do you want to learn Expert Tips and Tricks?
Yes, I want to learn!
No Thanks, I just want to read the article.
Feedback
How are we doing?
We'd love your thoughts, feedback and questions regarding our new site. All feedback is appreciated!
We do not respond to this form! If you need support, please visit our support page.
Thank you for your input!
Your message has been successfully sent
Course Advisor
Don't Know Where To Start?
Ask A Course Advisor