All Articles GarageBand
How to Grow Your GarageBand Loop Library in New and Exciting Ways
G.W. Childs IV on Sat, July 2nd 1 comments
Language
You may have heard me rant about this before: the fact that there are people who like using loops and people who don't. I'm not going to get into that again, I've done it before...

You may have heard me rant about this before: the fact that there are people who like using loops and people who don't. I'm not going to get into that again, I've done it before. But this much is true: if you read the title of this post and clicked on it, odds are you are a loop person as well!

GarageBand makes very good usage of loops and makes it a lot of fun at the same time. Apple, on top of it, throws in a whole slew of loops with every little Mac they sell. We're a spoiled lots, us Mac people.

Granted, this tutorial is out there. It's been done quite a few times. But, I'd also like to throw in something that you may never have thought of. What if you could convert loops made by third-party plug-ins into loops as well? Also, what about turning MIDI loops from GarageBand into audio loops?

So, lets' start off with the basics...

I won't dwell on this too long, but the tutorial wouldn't be complete without it. For this example, let's say that you make this groovy little drum beat and you think you'd love to have this in your loop library.

First, make sure that you crop the MIDI region into an even number of measures. Try to keep it around 2 to 4 measures in length, as anything beyond that can get a bit cumbersome in the loop world. If you need to crop it, move your cursor to the lower left- or right-hand corner of the loop until you see the resize arrows, and drag to create a 2- to 4-measure region.

You can also put GarageBand in Cycle Mode (shown in the figure below) to verify that the loop is, in fact, looping.

Once you're sure of your craftsmanship, let's go ahead and take this bad boy and put it in the loop box with the rest of the goodness. With the region highlighted (just click on it),  go to the Edit > Add to Loop Library... Once this is selected, you'll get a little window that wants to know how you want to categorize this new loop within your collection: 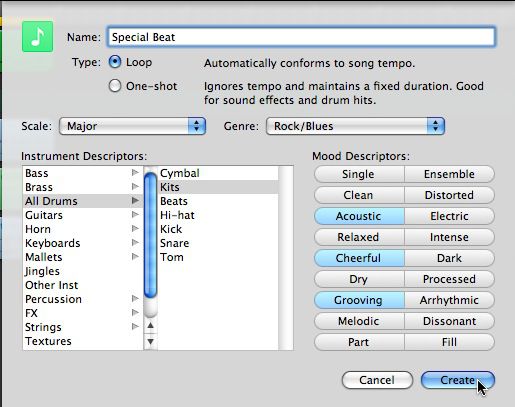 Notice that I've already filled in special info about my loop. The name of the loop, the fact that it's cheerful (yep, I was happy when I made it), it's acoustic, etc. The more criteria I give it, the easier it will be to find in a search. Once ready, hit Create. Now, it's in the tank with the rest of the fish. Ready to be pulled out and cooked in with some love and goodness...

But, this is the easy part. Let's take it a step further...

Here's where it gets a little trickier'"but this is still no new trick. If you want to bring this loop back as an audio loop, try this out. 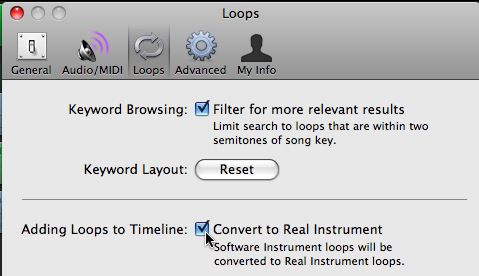 Now, when you drag in a loop from '˜Ye Old Loop Library', you'll suddenly get a blue loop, instead of a green loop. This means you don't get an instrument loop, you get a real audio loop! 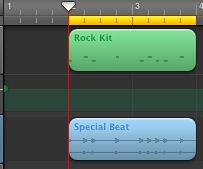 Now, let's talk about how to use this to your advantage.

There are some great plug-ins these days that come with some amazing loops right out of the gate. EZDrummer, Addictive Drums, MicroTonic, and Superior Drummer are all amazing examples of drum instruments that will blow your bloody mind!

But, what if you're strapped for processing power? What if you have a loop that you use regularly? What if you'd rather just go through a loop here and there, and just take what you like? Try this out!

Load up your favorite drums plug-in in GarageBand. I'll use Microtonic: 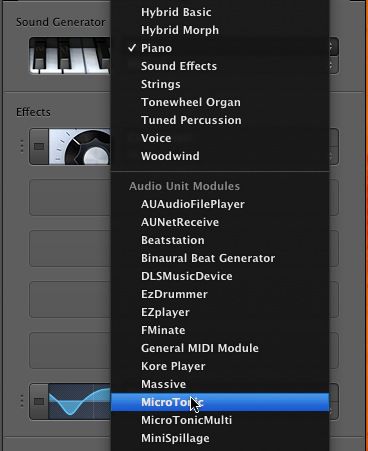 Using the MIDI drag function of MicroTonic, I'll drag my loop out of MicroTonic into the software instrument lane that my plug-in is currently assigned to. 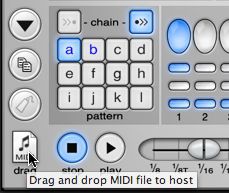 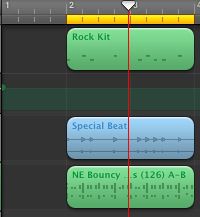 Now, my electronic groove from MicroTonic has been added as well. This also means that I can now convert this cool plug-in loop back into a MIDI loop. This also means that I can bring it back up later as an audio plug-in. So, the beauty of this is: I don't always have to use the plug-in. In a sense, I'm freezing audio plug-ins much the same way that Logic Pro freezes audio tracks or regions to save up processing power.

MicroTonic makes this even more interesting, because it works with the Patternarium.  This website is constantly chugging out new loops that you can use with MicroTonic. And, not only are the loops free to use for MicroTonic customers, but the sounds are, too. You can grow your library very, very quickly.

So, if you're a GarageBand user, it would behoove you to try this out. Not only can you grow your loop library within minutes, but having new loops from new places gives you a chance to spruce up your sound!