New in the massive Logic Pro X 10.4 update, the Step FX bring a whole different level of creativity to any session. But how do they work? In this short video from the course Logic Pro X 202: The Step FX, Joshua Carney shows you the core functions of the Step Modulator, breaking down how it works and how you can use it to add movement, dynamism and much more to your tracks.

Using the example of an Alchemy bass part, Joshua demonstrates how to take one of the plug-in's three modulators and assign it to affect the filter cutoff knob on the synth. The result is that the bass sound becomes much more interesting, almost dubstep in its pulsating character. And by tweaking the modulator and the filter amounts, you'll see that you can easily make the effect behave just how you want it to. For a complete guide to all the powerful new Step-based effects in Logic, be sure to check out the full course!

Logic Pro X 10.4 brought lots of new enhancements and features, and one of the highlights is certainly the Step FX plugin. In this course, engineer, producer and composer Joshua Carney reveals everything about this awesome new multi-FX plugin.

Joshua starts by demonstrating the engine that powers Step FX: the Step Modulator. You learn how, with its 3 different lanes, the Step Modulator can be used to create everything from subtle sonic movement to crazy gating FX. You learn the filter, distortion, reverb, delay and Mod FX modules in detail, and you see and hear them all in action with lots of musical examples. You also discover everything about the XY Pad, you learn to modulate drum loops, create glitchy vocal transition effects, and more…

So sit back, launch Logic and learn to take your music one “step” forward using Step FX with the great Joshua Carney! 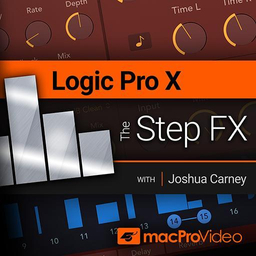 Dream It. Do It.
Do you want to learn The Step FX ?
Yes, I want to learn!
No Thanks, I just want to read the article.
Feedback
How are we doing?
We'd love your thoughts, feedback and questions regarding our new site. All feedback is appreciated!
We do not respond to this form! If you need support, please visit our support page.
Thank you for your input!
Your message has been successfully sent
Course Advisor
Don't Know Where To Start?
Ask A Course Advisor