All Articles Mixing & Mastering
How to Mix Digital but Sound Analog
Hollin Jones on Tue, December 26th 0 comments
In a digital world, it's still possible to get analog sound for your productions without using external hardware. In this short video, Rich Tozzoli shows you how it's done.

Most people record and mix on digital systems now, but it's still often desirable to lend an analog character to your productions, even if you're not using analog gear. Analog sounds warmer and some people believe, more authentic. In this short video from the course Rich Tozzoli 302: Mix Digital, Sound Analog, mixing expert Rich Tozzoli demonstrates how to use vocal echo from a plug-in to add analog feel to a vocal part.

Using a virtual echoplex module as a plug-in, Rich shows how adding short delays to a vocal can really change its feel and sound. Of course you can duplicate this technique using any echo plug-in you like, for your own unique results. You will also learn how to "abuse" the settings on the echo, pushing certain controls to extremes to create unusual effects like self-oscillation. Be sure to check out the rest of the videos in this course for much more on getting an analog sound out of your digital system.

Using an all-digital workflow when creating, mixing and producing your music doesn't mean you have to leave that wonderfully organic and "chills-down-your-spine" analog sound behind. We invited award winning mixer/producer/guitarist Rich Tozzoli to come in and show you how you can bring that warmth and punch back into your mixes, using an amazing array of incredibly powerful (and fun to look at!) plugins from UA. He answered our call by crafting this 54-tutorial masterpiece!

Like a true sonic artist, Master Tozzoli has brought his favorite tools to the party, and he’s pulled a couple of all-nighters, so...get ready! In this massive, take-no-prisoner audio course, Rich shows you why he picks one plugin over another and explains how to get the most of each one to make your tracks really speak! You'll watch and learn as Rich moves deftly and expertly across the virtual mixing board, sprinkling some carefully chosen plugin ingredients over drums (both live and virtual), bass, guitars, keyboards and even vocals, to give them that Oomph and bring out their warm, analog personality so they stand out in your mix.

So, get ready for an amazing Universal Audio journey that will inspire you to boldly take your music in analog-sounding directions you never dreamed possible! 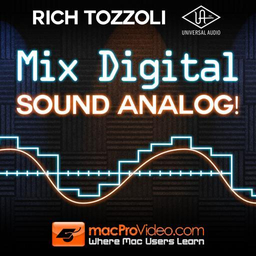