All Articles News
I2C8 Relaunched As MIDIQ MIDI Sequence Generator Under The Label Of W.A. Production
Hollin Jones on Thu, November 21st 0 comments
Stuck for ideas? MIDIQ can help with inspiration by generating chords, patterns, sequences and more. Plus, it's on sale for a limited time...

Under this new partnership, the first successor product to Re-Compose's existing products has been launched by W.A. Production. MIDIQ replaces I2C8 and features a slightly redesigned user interface, optimized performance, and the new branding.

Customers who have already transferred to W.A. Production, get a license code for MIDIQ as well as the Pumper 2 plug-in added for free to their W.A. Production account. 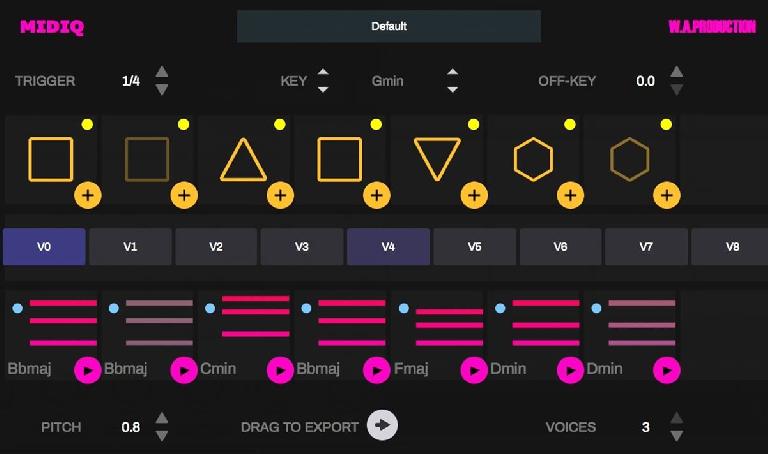 Generating near-limitless chord sequence possibilities, MIDIQ uses a simple pattern language for the definition of repeating chords. The layout resembles a slot machine so the interface is very visual. In fact, you don’t need any knowledge of music theory to get some great results from MIDIQ.Whenever you add or change a pattern symbol, the algorithm generates a chord for this position and also creates a set of eight alternative chord sequences for the current pattern of symbols. A click on one of the chord boxes is enough to switch to a new variant. Truly inspiring stuff.

Preset data is automatically saved in DAW sessions and can be exported for import into other sessions. Equally, copy-and-paste, drag-and-drop and drag-to-host functionalities are all included for ultimate flexibility.

It doesn't stop there... experiment with feeding a chord progression into an arpeggiator, running several plug-in instances in parallel, generating polyrhythmic patterns and finding interesting chord progressions between two or more chords.