All Articles Logic Pro
Logic Pro X: Prepping Stems for a Mix or Remix
Darren Burgos on Mon, March 10th 0 comments
Language
Once you finish recording and arranging your track in Logic Pro X, you may be thinking about mixing and/or remixing it. Here's how to get everything in order before sending to a mixing engineer.

Today, any creative person with a relatively fast Mac or PC can release their own music. Everything from the first chord that inspired the song, to the final mastering can be done on your computer. Should you mix your own music just because you can? The problem with this is when you've spent a month'"or more'"composing, arranging, and producing a track, it's hard to step away and see the big picture'¦ this is what a good mixing engineer can do for you. In this article I'll be showing you how to prepare stems in Logic Pro X so they can be sent to a mixing/re-mixing engineer without losing anything in the process.

The first step should really be the consultation with the mixing engineer. This is where you have your chance to express how you'd like the mix to sound, and talk about what effects on each of the tracks should stay or go. Reverb is notoriously difficult to remove so this topic is a common consideration. If you've been using creative effects on your tracks, most of the time these should stay. In today's dance and electronic music for example, using effects is part of the whole creative process and can often define a musical part. Once you've consulted with the mixing engineer, you'll be ready to start preparing your stems.

Save as a new Alternative

Logic's new 'Alternatives' feature allows you to save a version of the track inside the same project. Save a new 'Alternative' before you begin and call it 'Stem Prep.' This way you can do any of the steps below without worrying that you've damaged the original project. From Logic's File menu select Alternatives, then New Alternative. 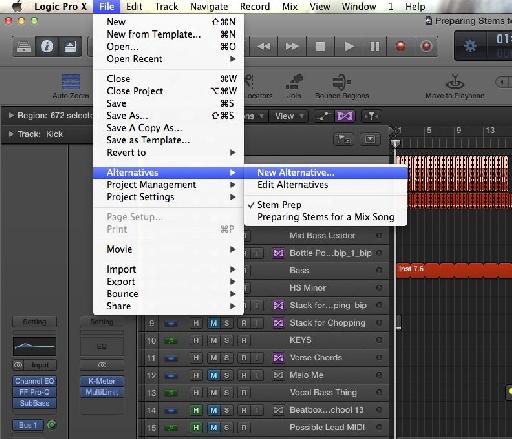 Bypass any effects on the tracks that will not be part of the stems package. There's really no easy way of doing this. This is your decision and you'll need to go track by track. 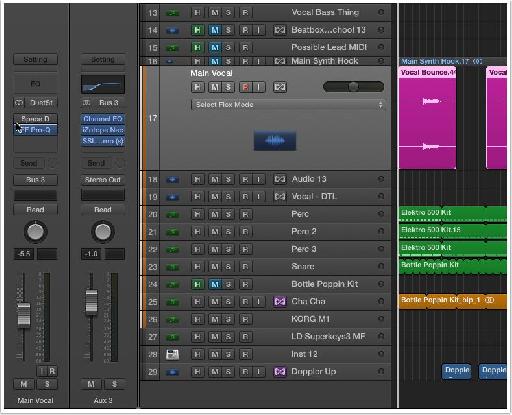 Even though tracks without content are not included when exporting, deleting them really helps to keep things organized. From Logic's Track menu select Delete Unused Tracks. Muted tracks are included, so unless you want them included in the stems package, delete them too. 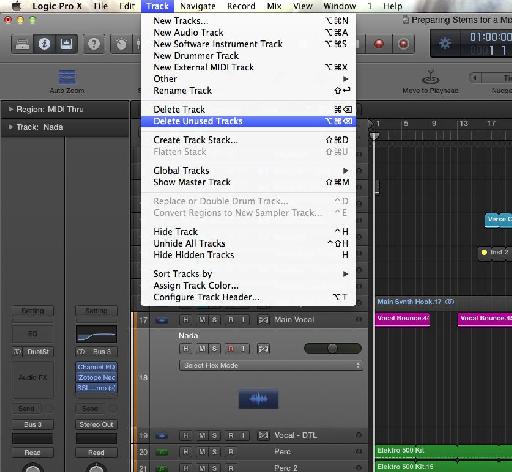 Are there tracks in the song that can be merged together? Snare/Clap sounds? Stacked sounds that are never meant to be played apart from one another? Give this some serious thought. The less tracks the mixer will have to dig through, the faster he/she will be able to get down to business. On the other hand, don't give them too few that would limit their options. Merging Tracks in Logic X is extremely easy. You can even mix and match audio tracks with software instrument tracks. Select all the regions you'll be merging. Control-click one of the selected regions and from the menu select Bounce in Place (from the Bounce and Join menu). You'll even be given the option of wether or not to include any effects on the tracks! Once the newly merged track is created, delete the two originals and all the content on them. Don't worry'¦ remember you saved your song as a new Alternative so the original is perfectly safe. 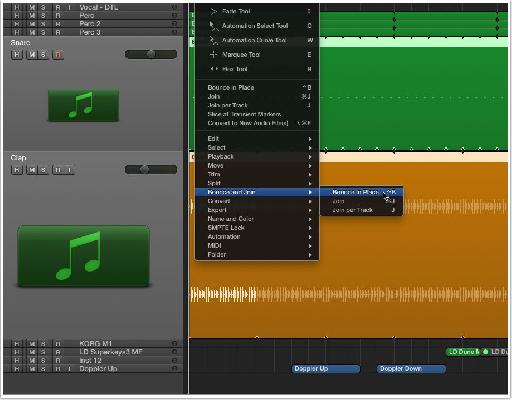 If you already started mixing, you might have added volume and panning automation. Often this is not wanted by the mixing engineer. You can easily remove this. First select the track, press A to toggle the automation view, then select the automation you want to remove from the list. Once it's visible, from the Mix: Delete Automation menu, select Delete Visible Automation on Selected Track. You have the option to remove automation/panning across all tracks when exporting, but from my experience, it's not normally all or nothing. When producing EDM'"just like using creative effect'"volume and panning can be a part of the 'sound' itself so options are vital. 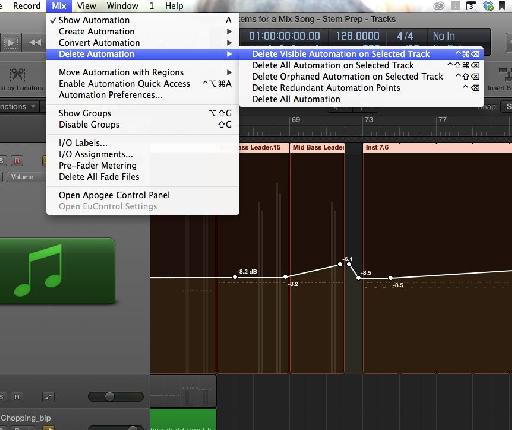 Include Busses in the Export

So you're using plenty of busses in your track and you want to include them in the stems package? First open the mixer and find the Aux/Bus tracks you want to include. Control-click each of them and select Create Track. This will add the track to the Arrange Window/Work Space. 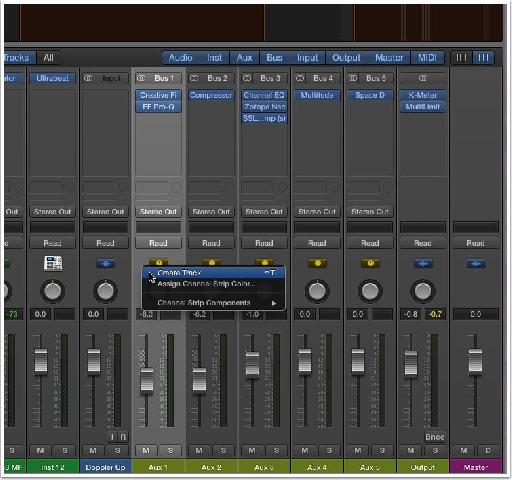 Close the Mixer and select the newly created Aux/Bus track in the Arrange window. Switch now to the Pencil tool, and create an empty region on bar one. Stretch that region all the way out to the end of the song. When you go to Export All Tracks in the final step of this article the busses will now be part of that export! 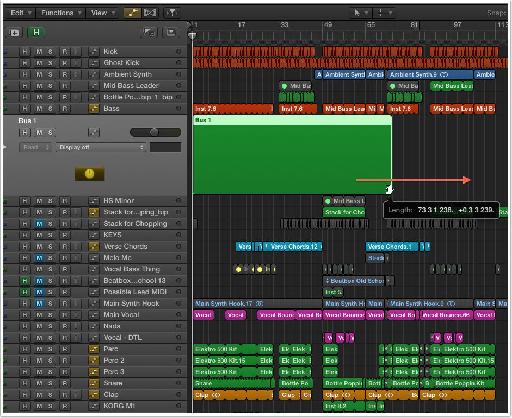 Before actually exporting your tracks, giving each one a meaningful name will help the mixer quickly organize them before starting. There's nothing worse than 'Track 1, 2, 3, etc., or obscure preset names when receiving a batch of stems. Double-click the track's existing names to rename them. Whatever you write here will be saved to the track's file name when you export. Export All Tracks (Including Multi-Out Instruments)

From Logic's File menu, go to Export, then select All Track's as Audio Files. A finder window appears allowing you to save all the tracks from your song. In the example below I've created a folder within the project's audio folder called 'Stems.' This is where I'll save them. So what about the multiple output instrument tracks that were only visible in the Mixer (if you have them)? Needless to say you want to include those too. From the Multi-Output Software Instrument menu, select One File Per Channel Strip. This selection works best for me, but some of the other options in this menu might work better for your workflow. Let's say that you're not entirely sure if some of the tracks were clipping. From the Normalize menu I'll choose Overload Protection. This great feature will lower the volume of any tracks that are over zero decibel, and doesn't touch the tracks that are below it. Choose either AIFF or WAV as the Save Format, 24-bit for the Bit Depth and press Save. As mentioned above, you also have the option to bypass/include effects, and volume/pan automation. It's all up to you as to what you actually want to include and not include, so the steps above show how to remove these on single tracks. This makes more sense to my work flow since often I want a combination of options. 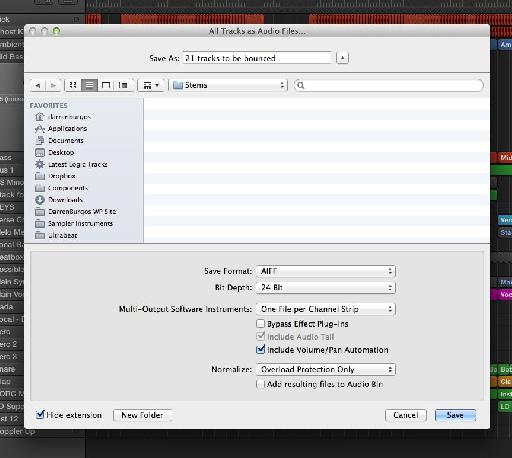 After the stems are saved, zip them and use either the mixing site's file upload system on their site, Dropbox, or any other cloud or file sharing service to deliver them. When you're muting unnecessary effects, remember to do the multi-out tracks if you've used them in your song'¦ they're easy to forget since they're usually only in the mixer.

Hope you enjoyed the article, and that it helps makes your stem preparation a little easier! Thanks for reading.

Dream It. Do It.
Do you want to learn Bouncing, Sharing and Archiving?
Yes, I want to learn!
No Thanks, I just want to read the article.
Feedback
How are we doing?
We'd love your thoughts, feedback and questions regarding our new site. All feedback is appreciated!
We do not respond to this form! If you need support, please visit our support page.
Thank you for your input!
Your message has been successfully sent
Course Advisor
Don't Know Where To Start?
Ask A Course Advisor