All Articles Logic Pro
Logic Pro's X's Bass Amp Designer: Not Just for Bass Guitarists
Darren Burgos on Mon, November 4th 3 comments
Language
Bass amps are for bass players only? Nope! Kick open Logic Pro X and follow this excellent tutorial by Darren Burgos as he shows you how to use Bass Amp Designer in new and novel ways for synths.

Imagine taking an audio cable from the output of a physical synth/sampler, and plugging it directly into a physical mixing board. That's exactly what virtually happens every time you open a software instrument directly from the channel strip in Logic Pro. So now, back to the physical world... instead of plugging directly into the board, you plug the synth into an amplifier, that's plugged into a cabinet speaker made specifically for the amp. You can then decide whether or not you want to either use an audio cable directly out of the amplifier that is then plugged into the board, or if you want to use a microphone placed in front of the cabinet to record the output of the speaker. Because a traditional bass guitar is not amplified on its own, it has to follow a path like this. Where the fun begins is in the quality and character of the gear it's being sent through. With Logic's new Bass Amp plug-in you can follow this same process virtually on you synth bass sounds. 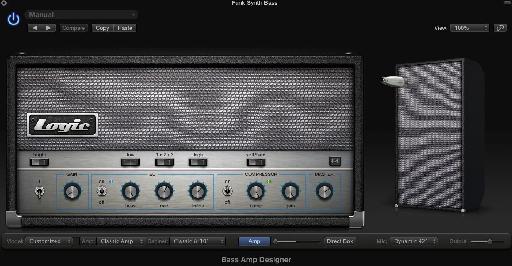 Sending synth or sampled bass through Logic's new Bass Amp Designer effect, can add instant depth and vibe that normally only physical gear can deliver. If you were/are a Logic Pro 9 user you might have tried the old Bass Amp on your synths, it's been somewhat of a secret weapon, and now this new version extends its capabilities far beyond the original. So many of you may be wondering "where is the original Bass Amp?" Don't worry, even though Apple consider it (and many other plug-ins) "legacy", it's still available in Logic X. Before you click the Audio FX menu, hold down the Option key and the Legacy menu will appear at the bottom.

About the 'Gear' in Bass Amp Designer

Let's take a look at the actual bass rig. If you are an electric bass player, you should definitely read though this article too. You'll relate more to the gear descriptions! Keep in mind that none of the units are actually labeled by their specific brand names, but it's pretty easy to deduce which ones are which by looking at them, and by their descriptions. There are three different amps/cabinet emulations. You have your choice of an Ampeg SVT, an Ampeg B-15, and a Mesa/Boogie 400. There is also an excellent sounding Direct Box model of an Avalon DI U5. The virtual cabinets (the "speaker" the sound comes out of) are then mic'd with either of three microphone models: a Neumann U87, an Electro-Voice RE20, and a Sennheiser MD421. To the synth bass player, these may not sound impressive to you at all [that's OK], the intention of this article is to get you familiar with the process that some physical bassist use to produce their sound. Trust me, many bass guitarist will know these pieces of gear! By using this same method on your synth or sampled bass sounds, you'll add vibe, punch and thickness difficult to attain with EQ alone.

Choose a Synth/Sampler, and Add the Effect

While writing this article, I used Logic's ES2 synth set to the Funk Synth Bass setting. I set the Osc Start to Hard, and automated the Filter, and Resonance. Either use that specific ES2 patch/setting, or open any bass synth/sampler you like. Add the Bass Amp Designer as an effect at the top slot on the channel strip, and remove/bypass any other effects below it. 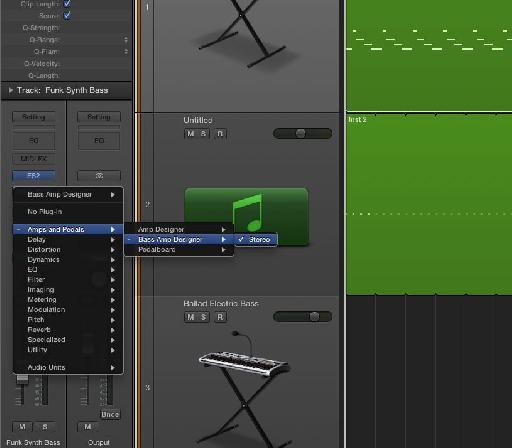 Before you start to play, reduce the gain knob directly below the word "Logic" on the amp. Remember that an electric bass is not amplified naturally, so the amp's input can be set too high for an amplified sound like a synth or sampler. The default patch brings up the modern amp/cabinet and uses a dynamic mic to pick up the sound. 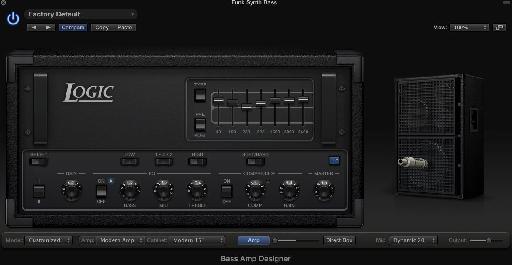 You can easily adjust the microphone placement. Move your pointer over the microphone and a display will appear allowing you to position it. Try moving it off center a bit for a darker sound. Swap out the microphone now by choosing a different one via the Mic Menu. 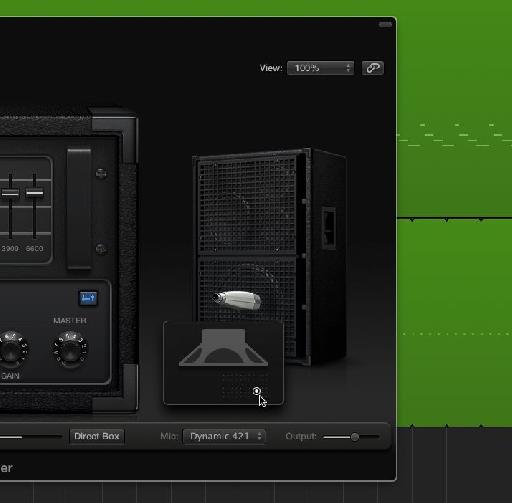 Change to a Different Amp Model

The Amp Menu allows you to choose one of the three amp models. You can choose from Modern, Classic and Flip-Top. Apple have emulated the actual tubes and circuitry of each amp, all of which have identical settings that are retained when switching between them. But you'll notice a very different sound and feel for each one. Switch to the Flip-Top Amp via the Amp Menu and adjust the gain control if you hear distortion. 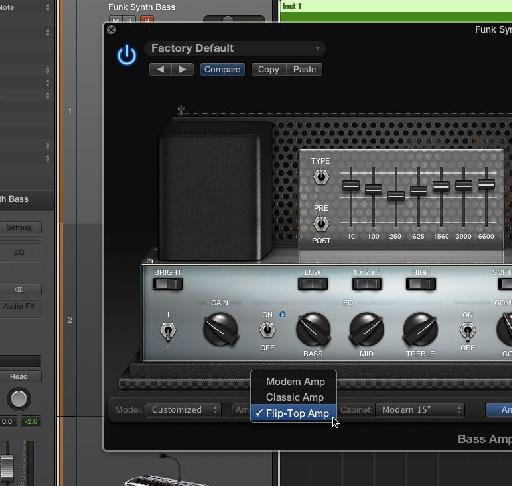 Choose a Cabinet (Or Not) 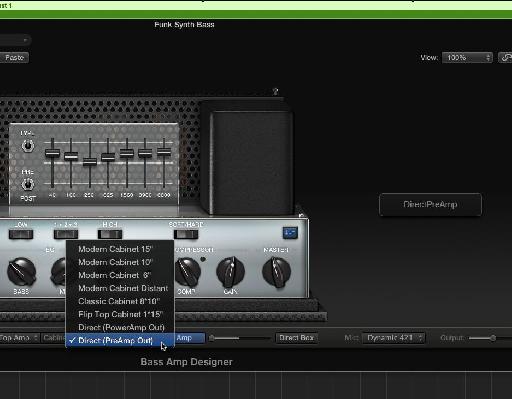 Set the low EQ all the way up, and its switch to the middle position. Set the Mid and High EQ to slightly above the center (around 1 or 2 o'clock), and their switches to the first position. Push the Compressor's Comp and Gain controls all the way up and adjust the graphic EQ close to how I have it in the image below. If you hear any distortions, again, make sure you're adjusting the gain knob. This should give you a nice bass thickener. 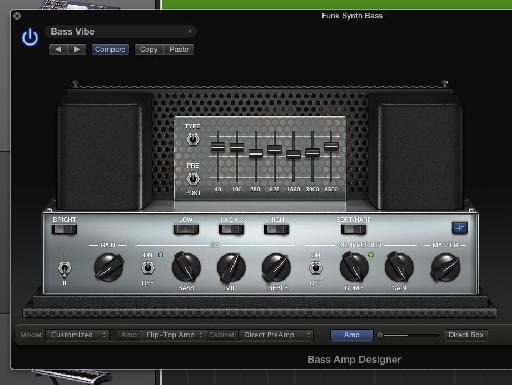 Between the Cabinet and Mic menus you can click to display either the chosen amp, or the Direct Box. There's also a slider that let's you adjust the level between them. Click the Direct Box button and move the slider all the way to the right. Before you play, adjust the Boost control... you may have to pull it back considerably. The DI Box is absolutely fantastic sounding. It adds clarity, smoothness and "vibey" warmth like no other plug-in in Logic. It presents the sound in as perfect a way as possible by rounding out the high mids and highs. Change the Tone control to taste, but I set mine to the 1 position. 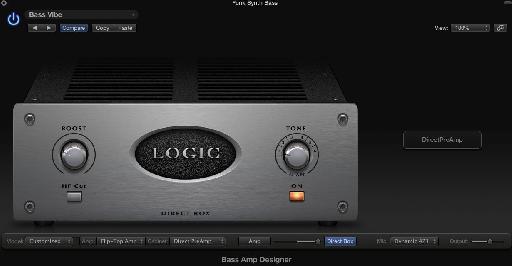 Now I like the way the DI box sounds on it's own... I sent the kick through it, (and it alone) in the audio example below, but I want some of the amp feel in there too. The slider in the amp selection area allows you to blend between the Direct Box and the actual selected amp model. Slide it over slightly to the left to allow the amp sound in. I went with a small amount. Here's a before and after sample of what I came up with...

While you're playing with settings, keep re-adjusting the gain knob in the amp, and the boost knob in the DI. The Model menu allows you to choose a default set for each of the amps, including it's matching cabinet and a microphone traditionally used with it. You can go beyond adding analog type warmth (like in my sample), and distort the sound too... when a cabinet is present, push the master volume knob on the compressor up.