In this two-part article, we'll be looking at making a Dubstep groove with a single instance of Logic Pro X's Ultrabeat. No other virtual instruments will be used. We'll build a patch loaded with great sounds, and create patterns that we can dynamically trigger and arrange. In this first part, we'll focus on building the beat and learning about Ultrabeat's pattern mode, and in the second part, we'll focus on adding bass, arranging, and modulation with Logic's Smart Controls. There's tons to be learned in these two articles so read on even if Dubstep isn't your thing. Let's get started!

Open a new empty project in Logic, and change the tempo to 140 (The default Dubstep tempo). Dubstep is mostly sequenced in what is called 'half time.' Basically, instead of a standard 'kick - snare - kick - snare,' beat where the kick is on 1 and 3 and the snare is on 2 and 4,  the kick is on 1 (in addition to other areas) and the snare is on 3. Because of this, a full bar of half time is actually two bars of full time.  Ultrabeat's standard built-in sequencer length is two bars so this works out great. Some artists prefer slowing down the tempo to the 70 BPM range so that one bar really is one bar. However, I prefer doing half time, especially if you're programming your beats in Ultrabeat because its smallest trigger (resolution) is 1/32. If you half the tempo, that value is now only 1/16th and that's not enough for getting hat rolls, and fast synth stutters. 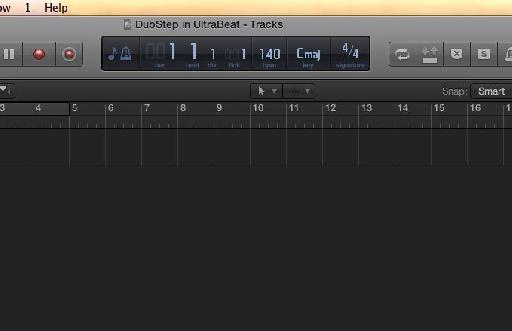 Step 2: Open a Multi-Out UltraBeat and Select a Setting

Create a software instrument, and choose an Ultrabeat multi-out version. Logic Pro X has tons of great new kits including new ones for Dubstep, Electro House, Italo Disco and more! First choose the 'Dub Smash' setting from the Drum Kits submenu. This kit has several sounds we'll be using for this lesson. The nice thing about it, is that all the sounds in this kit are set to Sustain on their envelopes. This gives the kit that cool stop-choppy feel (like it's edited audio). 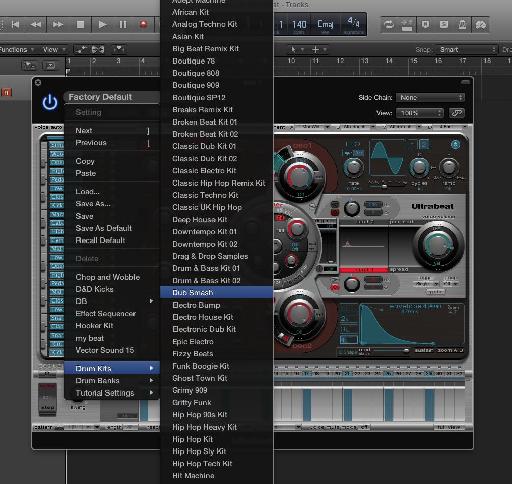 Instead of using the 'Kick' in lane 1, let's use the 'Kick 2' in lane 18. Pull it down onto the low kick to swap it out, this way the kick and snare will be close to each other for easier sequencing. You do this by literally dragging one sound onto another to swap their positions. It's quite easy to accidentally adjust the blue volume of the sound instead... try grabbing the lane's number when dragging and this won't happen. 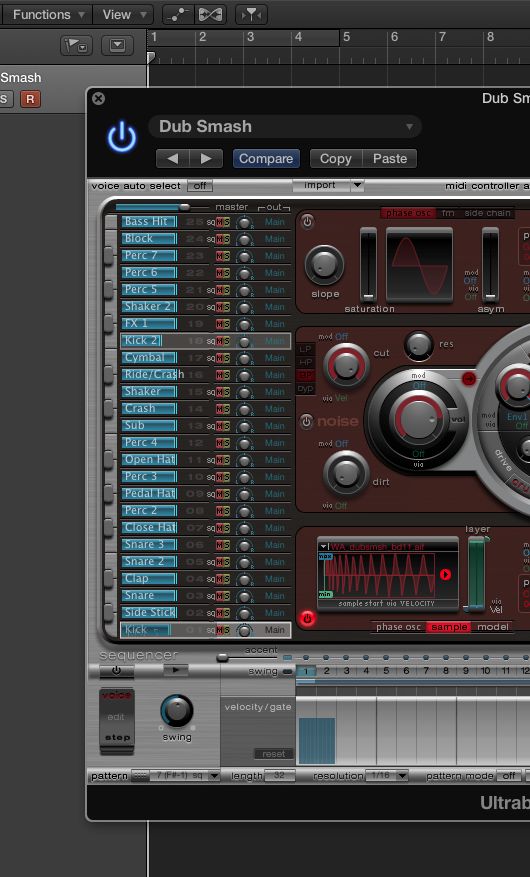 Step 3: Merge Sounds From Other Settings/Kits

Now let's start layering sounds from other Ultrabeat settings/kits. There's plenty of great drum sounds in the Dub Smash kit, but it needs more synth and FX however. So how do you merge sounds from other settings/kits? Click the import button at the top under the settings menu. When you do this, it brings you to Ultrabeat's Plug-In Settings folder in the Finder. 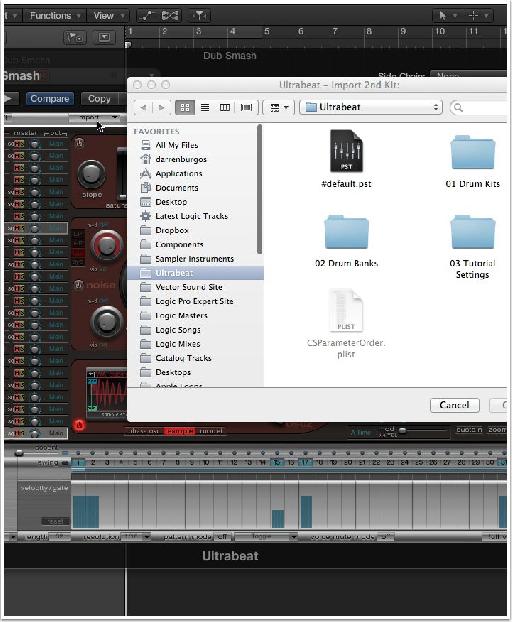 Double-click on the Drum Kits folder, then choose the 'Drum and Bass Kit 02'. All the sounds from the setting/kit are loaded into a drop-down menu right there within the existing setting! You can click any of the sounds to preview them. Click and drag the 'Growl' sound from the list and drop it onto lane 19's FX1 sound. You can hear the sound you're replacing ahead of time by clicking its keyboard key running vertically up the side. 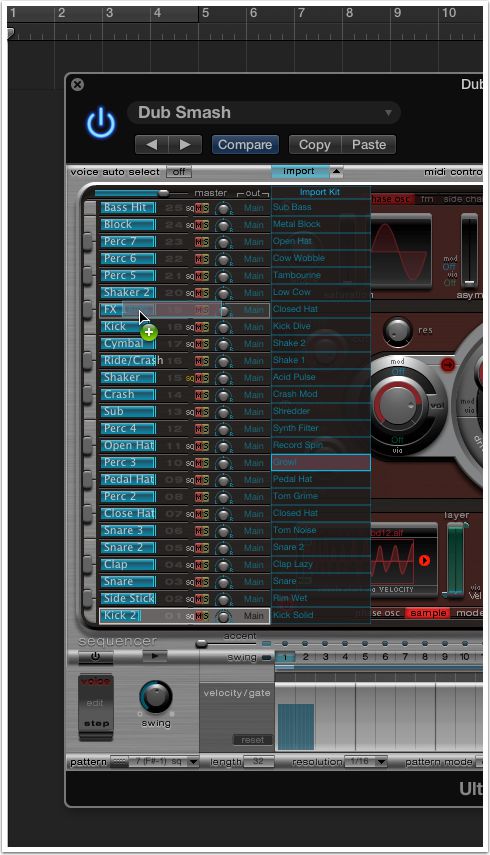 Creating drum loop sequences in the arrange window/piano roll, doesn't allow for the instant re-arrangement and experimentation like Ultrabeat's pattern mode (some third-party Logic Pro X's new MIDI FX plug-ins might fix this in the future)! Pattern mode in Ultrabeat lets you trigger up to 24 different patterns and switch between them with MIDI notes played from your controller. You build the patterns in Ultrabeat's Full View step sequencer, then trigger them with single MIDI notes starting from C-1 to B0. The way you play the patterns, can then be recorded and played back, or you can simply draw them into an empty MIDI region.

To get it working, simply click the pattern mode button to turn it on (bottom center of Ultrabeat). You have some choices of how the patterns are triggered in the menu to the right, but to keep it simple for this article just choose 'sustain.' Go to your controller now, and press C-1. You might have to press the down transpose button on your controller to get there. When you hold the note down, it triggers the first existing pattern in the Dub Smash setting/patch we chose in step 2. Go ahead and try out some of the other patterns. Apple have included some cool ones, but we're gonna do this by programming our own. 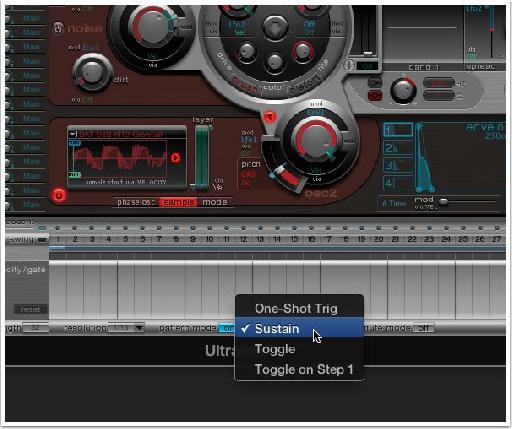 Remember that while in Pattern Mode, you must press each corresponding MIDI key to actually hear the pattern. If you press play on Ultrabeat's sequencer, you'll turn off Pattern Mode and we don't want this.

Step 5: Stepping in the First Pattern 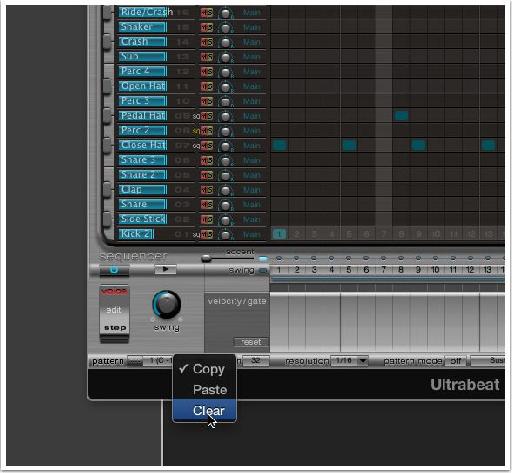 Start with the Kick sound in lane 1. Place a trigger (click to add a blue square) on beat 1 and 5 (step 1 and 17). Beats in Ultrabeat are divided by a thin vertical grey line. Remember that this new Dub Smash Ultrabeat kit is brilliantly set to trigger sounds without being 'one shot.' This means that you must draw length into your triggers with the Velocity/Gate window at the bottom if you want them to last more than a single trigger length. The designer of this kit obviously knew that gaps in Dubstep are nearly as important as the triggered sounds! Place a trigger on beat 3 and 7 (step 9 and 25) for the snares (I'm using snare 2 and 3 together).

Now try adding long triggers on every beat (a total of 8) for the Ride/Crash sound. Also place some triggers on the 'Close Hat' sound on lane 7 and add one long trigger on the 'Sub' sound on lane 13. While you're at it, place some triggers on the Growl sound we grabbed in step 3. I'm using the Growl sound almost like a hi hat to create a stuttered effect. There's no rules here. Experimentation is key so go for it! If you create a pattern that you like, but you're not entirely sure of, press the 'copy' button below the presets menu. This will allow you to 'paste' (right next to copy) the pattern back again if you feel like you've messed it up. If you think the kick and snare are a bit dry right now (I do), hold on... at the end of part two we'll be sending them to separate outputs for individual processing. 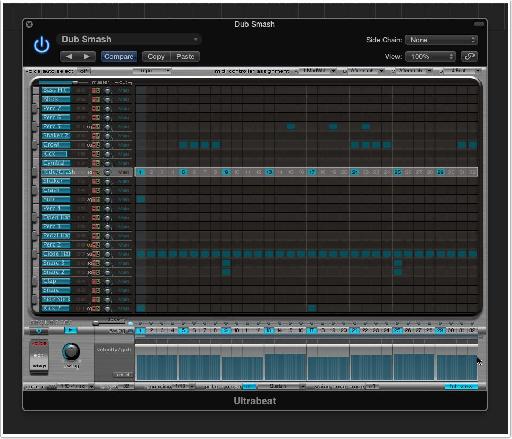 It's not much yet, but here's what I have so far:

In part two we'll be creating patterns using musical tuplets for those '1-2-3, 1-2-3' grooves, adding a bass and modifying its EQ with Smart Controls, arranging the patterns we create, and finally processing them with FX! Check it out! Part 2 is where it all comes together.