Native Instruments' Massive X is a complete rewrite of the comapany's flagship soft synth and in this video from the course Massive X 201: Designing Massive Sounds, Rishabh Rajan shows you in just a few minutes how to build a monster bass patch from scratch. Follow along as he uses the various synth sections to craft a killer bass sound.

Using the synth's modules, he begins by making basic connections, linking oscillators to filters and outputs. He then gets into more detail, choosing settings within the individual sections and finally adding effects to dirty up the sound. You will see that Massive X isn't as daunting as it may at first appear when you understand its basic structure and the way it generates and processes signal. Check out the full course using the links below for quick but comprehensive walkthroughs on creating many other types of sounds in Massive X. 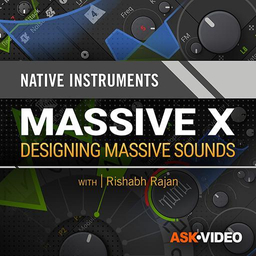 Dream It. Do It.
Do you want to learn Designing Massive Sounds?
Yes, I want to learn!
No Thanks, I just want to read the article.
Feedback
How are we doing?
We'd love your thoughts, feedback and questions regarding our new site. All feedback is appreciated!
We do not respond to this form! If you need support, please visit our support page.
Thank you for your input!
Your message has been successfully sent
Course Advisor
Don't Know Where To Start?
Ask A Course Advisor