As there was a very enthusiastic response to my article on techniques that I was taught to strengthen melody and motif composing, here is a related topic that I hope you will find also useful.

If you are a classically trained musician, you probably took a year or two studying solfÃ¨ge, or sight-singing with pitches, as I did.

But even if you are not formally trained or simply never studied solfÃ¨ge, you are more than likely somewhat familiar with this concept if you ever saw the movie or the stage musical The Sound of Music and heard 'Do-Re-Mi.'

It is a very useful practice to work on as it allows you to write or analyze melodies away from your keyboard or guitar and improves your ability to 'hear' music in general.

The syllables generally used for performing solfÃ¨ge are Do, Re, Mi, Fa, Sol, La, Si, Do, (the song in The Sound of Music not withstandingâ˜º

You can either use 'fixed Do' or 'moveable Do'. With fixed Do, the pitch C is always Do, D is always, Re, E is always Mi, etc. while with movable Do it relates to the key, e.g., in the key of F Do is F, G is Re, A is Mi, etc. There are good arguments to be made for either but personally I prefer fixed Do, the way I studied, as it serves you better with songs that change keys frequently or pieces that do not have a dominant tonal key center or indeed in the case of twelve tone and atonal music, any tonal center.

When I was majoring in composition at the Boston Conservatory of Music we had to take a solfÃ¨ge test almost every week. Although my teacher was kind and funny, it nonetheless was terrifying. And I was also a singer. The non-singers were even more terrified!

Somebody taught me (not the teacher) that I could use snippets of songs I was very familiar with to hear the intervals in my inner ear, which was a great help.

Now I am... ahem... a person of a certain age so my song references are possibly going to be very different from yours and the challenge to you will be to find your own. However, let us soldier on â˜º

In Pic 1, you can see every ascending interval from C up to an octave:

In Pic 2, you can see every descending interval from C down to an octave

C to C# is sung 'Do-Re' as is C to D natural. I am going to assume that you would have no problem hearing either a minor or a major 2nd and begin with the major 3rd.

In Pic 3, you see the first phrase of the folk song 'Michael Rowed The Boat Ashore.'

Let's analyze this. The first two pitches corresponding to the sung word Michael is an interval of an ascending major 3rd while the second syllable of Michael, the 'chael' to the word 'rowed' is a ascending minor 3rd. And  the interval for 'rowed' to 'the' is a descending minor 3rd. So just the first measure gives you something in your inner ear that allows you to hear three interval relationships! Once they are in your head, you can use them from any starting note to hear and sing the interval.

In Audio Example 1, you will hear the major 3rd played starting on every note from C up. As you listen, sing 'Mi-chael' to yourself and you will get the idea.

Similarly, to get the interval of the descending minor 3rd, you need to hear 'rowed the' in your head listening to Audio Example 2.

Hopefully, you are starting to grasp the principal. Want some more? How about 4ths? This famous opening melodic phrase from Mozart's 'A Little Night Music'  that you see in Pic 4 gives you both ascending and descending perfect 4ths.

A very difficult interval to hear is the augmented 4th or triton. Ascending however, it is the first interval in the song 'Maria' from West Side Story. See Pic 5

How about a major 6th ascending? That is the first two pitches of the NBC logo music (followed by a descending major 3rd.) See Pic 6.

Minor and major 7ths are tough. Once again from West Side Story. The song 'Somewhere' begins with a minor 7th while the first three pitches from 'Bali Ha'i' from South Pacific, if you ignore the second pitch yields the major 7th. See Pics 7 and 8.

Man, I don't know how I would have passed four semesters of solfÃ¨ge without these to help me but pass them I did. Why bother, other than for the fact that it was a required part of the degree and it isn't for you? In a word, musicianship. After two years of practicing solfÃ¨ge, I could pick up the music to a song I had never heard and sing it reasonably accurately rather quickly. Also, to this day I can hear songs/motifs in my head to either analyze or even compose because of this work. I recommend the following to you highly.

Listen to some of your favorite songs or buy the sheet music and analyze the intervals.

Try to sing the specific intervals starting on C and then on every tone.

Obviously, I have not covered every single ascending and descending interval here as it would take forever and also, as I wrote, you simply may not have in your head the same songs to reference that I do and therefore will want to find your own. But that is part of the fun!

Learn more about music theory with these courses at AskVideo:
http://www.macprovideo.com/tutorials/musictheory-topic
Related 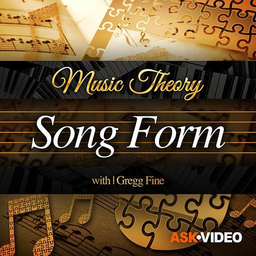 Dream It. Do It.
Do you want to learn Song Form?
Yes, I want to learn!
No Thanks, I just want to read the article.
Feedback
How are we doing?
We'd love your thoughts, feedback and questions regarding our new site. All feedback is appreciated!
We do not respond to this form! If you need support, please visit our support page.
Thank you for your input!
Your message has been successfully sent
Course Advisor
Don't Know Where To Start?
Ask A Course Advisor